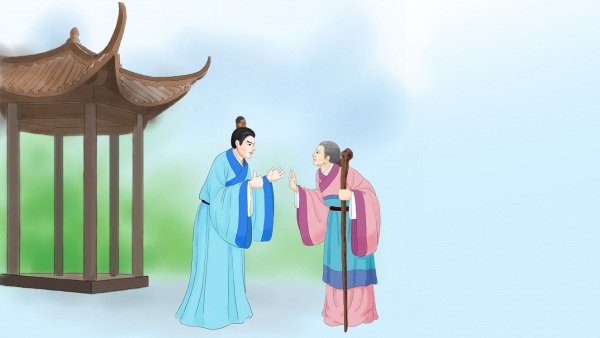 The ancients taught their children to cultivate morals to enable them to 'consolidate their family, govern their country, and make the world peaceful.' (Image: Zhiqing via Look at China)

China has a civilization with a history extending back over 5,000 years, and has always been famous for its emphasis on “family education” and building the moral character of its children. The ancients taught their children to cultivate morals to enable them to “consolidate their family, govern their country, and make the world peaceful.”

This valuable experience and tradition of family education have been passed down to successive generations. When Kou Zhun (961-1023), an official of the Northern Song Dynasty, was young, he was self-indulgent, indifferent, and lazy. So how did his mother get him sorted out and educate him so that eventually he became a wise and much-praised prime minister of his generation?

Kou Zhun lost his father when he was a child. He was from a poor family.  His mother relied on weaving to earn a living. She often supervised Kou Zhun in his studies even into the middle of the night while she was spinning yarn.

Mother Kou at that time became seriously ill. Before she passed away, she handed a painting to a relative called Liu Ma.  Mother Kou told Liu Ma: “Kou Zhun will be an official in the future. If he has done any wrong, hand this painting to him!”

Soon enough, Kou Zhun became prime minister. To celebrate his birthday, he invited two theatre troupes and prepared a banquet for the officials.  Liu Ma thought that the time had come, so she handed Mother Kou’s painting to him.

Kou Zhun un-scrolled the painting and saw that it was a picture of Chill Window Lessons with a verse written on it;

“In the solitary lantern class, it is hard to learn.

He cultivates himself for the sake of the people.

Diligence and thrift are the family traditions.

Becomes rich and prosperous in his time.

He never forgets that he was once so poor.”

This is Mother Kou’s legacy. Kou Zhun read the poem repeatedly and burst into tears. He immediately canceled the banquet for his birthday and returned all the gifts he received.

Ever since Kou Zhun became an official and every time he received his salary, he would put it in the hall. An elderly maid saw this and was so touched that she said to Kou Zhun: “When Mrs. Kou passed away, the family was so poor that she did not even have a piece of silk for her burial gown. It’s so sad that Mrs. Kou will never be able to see what you are today.”  When Kou Zhun heard this, he was very sad. He kept this in mind and lived a frugal and simple life.

Kou Zhun had a blue cloth quilt that had not been changed for 20 years. During that time, some people used to laugh at him saying that he was like Gongsun Hong of the Han Dynasty under Emperor Wu.

Gongsun was a Chinese philosopher and politician, and he was said to have promoted the virtues of frugality and modesty. As a nobleman with lots of income, Gongsun always used one cloth quilt seemingly, it was thought, to demonstrate his frugality.

On hearing this, Kou Zhun smiled faintly and told the people: “Gongsun was doing this for his own reputation. As for me, I sincerely want to be thrifty, so what is there to be ashamed of?”

Although Kou Zhun was rich, he refused to build a mansion for himself. The hermit, Wei Ye, specially presented him with two poems for this purpose in which there is a sentence: “There are top officials but there is no land to build a mansion.” This was to compliment Kou Zhun.

Being a prominent high-ranking official, he refused to build a mansion, and the ethnic minorities in the North gradually came to know about this. Once, an envoy from the minority tribe saw Kou Zhun in the court, and asked the courtier next to him: “Is this the humble prime minister who has land but does not want to build a mansion?” People of the ethnic minorities respected Kou Zhun very much.

Family education in ancient times focused on ethics and morality and these were taken to be the highest values. There was an old saying:

“A good house has prosperity and happiness, a bad house has calamities.”

“It is better to teach the children and grandchildren scriptures than to leave the whole basket of gold for them.”

Moral education for children is for their own good. In fact, morality is the most fundamental, essential, beautiful thing and source of blessings for a human being, so the most reliable wealth to be passed down to children is morality.

Family education is characterized by precepts and deeds, and it is so subtle. Due to the great flexibility of children, education to enhance their behavior is particularly important. They will gradually come into contact with the truth, a thing that they could not enlighten to for the time being. Therefore, it is only with correct guidance that things in life go right.

Parents always want to leave the best things for their children. In fact, no matter how much money is passed down to them, this is only external and fleeting.

It is only by teaching children virtues and kindness through family education that they can really benefit in the long run. Through moral values and virtues, they can maintain a clear mind at all times, distinguish between right and wrong, and choose the right path in life.