As Long as the Heart Does Not Die, the Candlelight Will Never Go Out 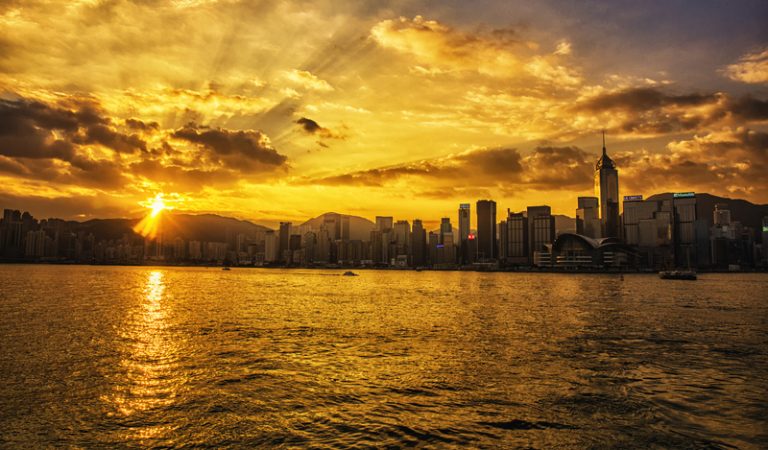 'In spite of all the hardship, the obstacles, and tribulation imposed upon the people of Hong Kong, there it is again — the sunrise in all its glory over the City.' (Image: Valentin Armianu via Dreamstime)

Perversely, the new regime in Hong Kong banned all traditional public commemorations of the June 4 Tiananmen Square Massacre. Nevertheless, the brave people of Hong Kong remain defiant and continue to hold their own candlelight vigils and commemorations.

The Hong Kong government banned the 32nd anniversary of the June 4 commemoration arranged by the Hong Kong Alliance in Support of Patriotic Democratic Movements of China (HKASPDMC).

The 64-year-old Social activist Wong Fung-yiu (Alexandra Wong ), known as “Grandma Wong,” was arrested by the Hong Kong Police Force on suspicion of “unlawful assembly” after she marched alone on May 30 following the original route of the Alliance’s June 4 March.

According to Cheung Tat-ming, Principal Lecturer at the Faculty of Law of the University of Hong Kong, one-person-only processions do not apply to unauthorized or unlawful assemblies, and he is worried that the arrests are fundamentally changing the rule of law in Hong Kong.

People the world over hold their own candlelight vigils

The Hong Kong Alliance in Support of Patriotic Democratic Movements of China applied to hold a “June 4 Rally” on May 30, and a candlelight memorial service in Victoria Park on June 4, which was rejected by the Hong Kong Police Force. The Appeal Board on Public Meetings and Processions rejected the appeal on May 29, citing the epidemic situation and the restrictions on gatherings.

The HKASPDMC subsequently announced the cancellation of the event and the cessation of publicity, calling on the public to mourn in a safe and peaceful manner.

On the 30th, the Hong Kong Police Force was heavily fortified in the area of Southorn Stadium in Wanchai, the original starting point of the June 4 demonstration.

Wong Fung-yiu, a 64-year-old known as “Grandma Wong,” who was once detained by the mainland authorities for her active protest against the June 4 demonstration, was sitting alone outside the stadium at around 2 p.m. holding a banner reading “32, June 4th, Tiananmen Lament” and waving a yellow umbrella draped with a British flag. She was sitting on the ground outside the stadium. The police were very nervous and surrounded her, asking her to leave.

Holding up an umbrella sign, she intended to march alone to the Central Government Offices in Western District, but 30 police officers, plainclothes policemen, and the media liaison team followed her. When “Grandma Wong” walked about 550 meters (600 yards) to the footbridge opposite the police headquarters, she was stopped by police officers.

She asked: “I am only one person, only one granny, why am I not allowed to go?” She was arrested on suspicion of unlawful assembly, and a number of policewomen escorted her to a police car.

On May 31, the police replied that Ms. Wong had been released on that day and had not been charged, but they will retain the right to prosecute.

On June 4, police arrested the Vice-Chairwoman of the HKASPDMC, Chow Hang Tung, on the charge of “promoting an unauthorised assembly to commemorate the 1989 Tiananmen Square crackdown on pro-democracy activists in Beijing,“ reported Reuters.

Chow strongly denied the charge, telling reporters waiting outside the police station on her release that it was “absurd.” Chow went on to tell those who were using Beijing’s National Security Law to stop the protest in Hong Kong’s Victoria Park that they were helping to shield the killers of the students at Tiananmen in 1989.

The scene of the Chinese Communist army’s suppression at Tiananmen Square in Beijing on June 4, 1989, shocked the world. For 32 years, Hong Kong people have insisted on commemorating the June 4 massacre and highlighting those responsible for it.

However, almost a year after the implementation of the Hong Kong National Security Law, the Hong Kong government has imposed heavy sentences on participants of peaceful assemblies and rallies, and banned commemorative activities.

The Hong Kong Alliance in Support of Patriotic Democratic Movements of China did not organize and publicize the June 4th Candlelight Vigil this year and sent a message to Hong Kong people to “use perseverance and wisdom to mourn the June 4 incident in their own way, at the right time and place, in a lawful, safe, peaceful and rational manner, so that the truth will not be lost.”