Let the Candlelight Illuminate the World 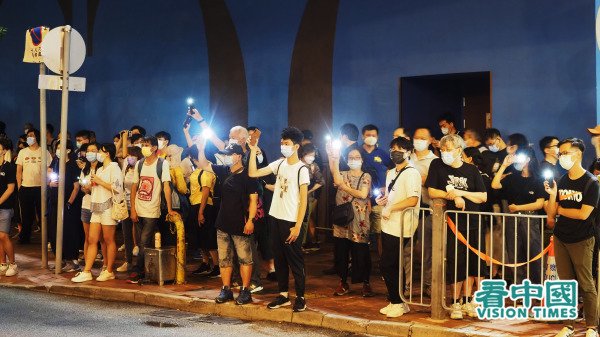 The people of Hong Kong turned on the their mobile phone lights in Causeway Bay to bring the lights of Victoria Park mourning June 4th to the streets and alleys. They defied the tyranny of the communist regime and illuminated the world. (Image: Tianzheng via secretchina.com)

June 4th marked the 32nd anniversary of the 1989 Tiananmen Square Massacre in Beijing. It also marked the first anniversary of the Hong Kong National Security Law being implemented. On that day, the people of Hong Kong not only defied the tyranny of the Chinese Communist Party overlords, but they went on to illuminate the world with their bravery.

As if facing a formidable enemy, the regime of the Hong Kong Communist Party deployed 7,000 police to guard against June 4th gatherings. But while police enforced suppression of any activities, no amount of force can change people’s hearts. Despite the suppression, the Hong Kong people mourned in various ways and maintained their anti-communist spirit of seeking truth.

Though Hong Kong’s annual Victoria Park candlelight vigil was officially banned that evening, overseas Hong Kong residents made efforts to launch June 4th rallies in the United Kingdom, the United States, Australia, Canada, Germany, and Japan, as well as many other parts of the world.

This year marked the first time the U.S. Consulate and the European Union Office also lit candles in their windows, as they shared in commemorating June 4th with the Hong Kong people.

The Hong Kong government’s suppression of June 4th activities began early that morning. The police first arrested Zou Xingtong, vice chairman of Hong Kong Alliance in Support of Patriotic Democratic Movements of China, who had indicated that she would insist on lighting candles on June 4th. She was detained by police for 33 hours.

After being released on June 5th, Zuo slammed the Hong Kong government: “You are helping the executioners erase their crimes, you are helping the butcher regime to clean up history, you are sprinkling salt in the wounds of victims who have been wronged in 32 years, and you are helping to consolidate the injustice of the one-party dictatorship.”

For the past 32 years, the June 4th candlelight vigil in Victoria Park was Hong Kong’s version of Tiananmen Square. But this year, beginning at 2 p.m., the Hong Kong police quoted the Public Security Ordinance as a pretext to justify blocking the central lawn and football field of Victoria Park, the first time this has ever occurred.

A large number of police officers acted out a ridiculous scene as they practiced advancing upon and clearing out the empty stadium. The Security Bureau also threatened people with five years in prison for participating in rallies or marches. The authorities even set up roadblocks in many major tunnels throughout Hong Kong to intercept vehicles heading to Hong Kong Island, causing a large traffic jam. Many districts in Hong Kong were also heavily policed.

The people of Hong Kong are not giving up

Although there was no candlelight vigil on the lawn of Victoria Park, that night the Hong Kong Alliance issued its annual June 4th declaration: “This year marks the 32nd anniversary of June 4th. Darkness has enveloped the earth, but we still see a little bit of candlelight cutting through the black sky. The CCP [Chinese Communist Party] is using totalitarian means to suppress the people’s call for freedom. The people will never forget or give up. Where the candle lights are, the people are; where the people are, there is hope.”

At the same time, hundreds of citizens outside Victoria Park were determined to illuminate the world and let the regime know they are not going away. They raised lit candles or mobile phone lights in the streets to mourn the Tiananmen Square victims. Someone graffitied on the street: “Don’t let June 4th become a forbidden word.” In other parts of Hong Kong, people lit lamps and candles, both on the streets and at home, and many posted pictures on social media, recreating a sea of lights.

At least six people were arrested that night, and at least 12 people, including journalists, were summoned for violating restriction orders. Civilians expressed anger at Hong Kong police for imposing martial law and a curfew in disguise, and the government’s actions have created an international scandal.

In the religious world, the Hong Kong Catholic Justice and Peace Commission held a “Mass for the Dead” in seven Catholic churches, all of which were filled to capacity. Believers who lined up outside the packed churches to mourn were also harassed, searched, and driven away by the police.

Cardinal Chen Rijun, retired bishop of the Catholic Diocese of Hong Kong, emphasized: “We refuse to be pessimistic, and we will not be disappointed.” He asked the people in power whether they still believed the so-called “taking the interests of the whole into account” was a good excuse to kill unarmed youth who love their country. “If this is the case, then the June 4th tragedy will not gradually move away from us, but may gradually reappear before our eyes.”