Denmark’s Utopian Brøndby Garden City Seems Out of This World 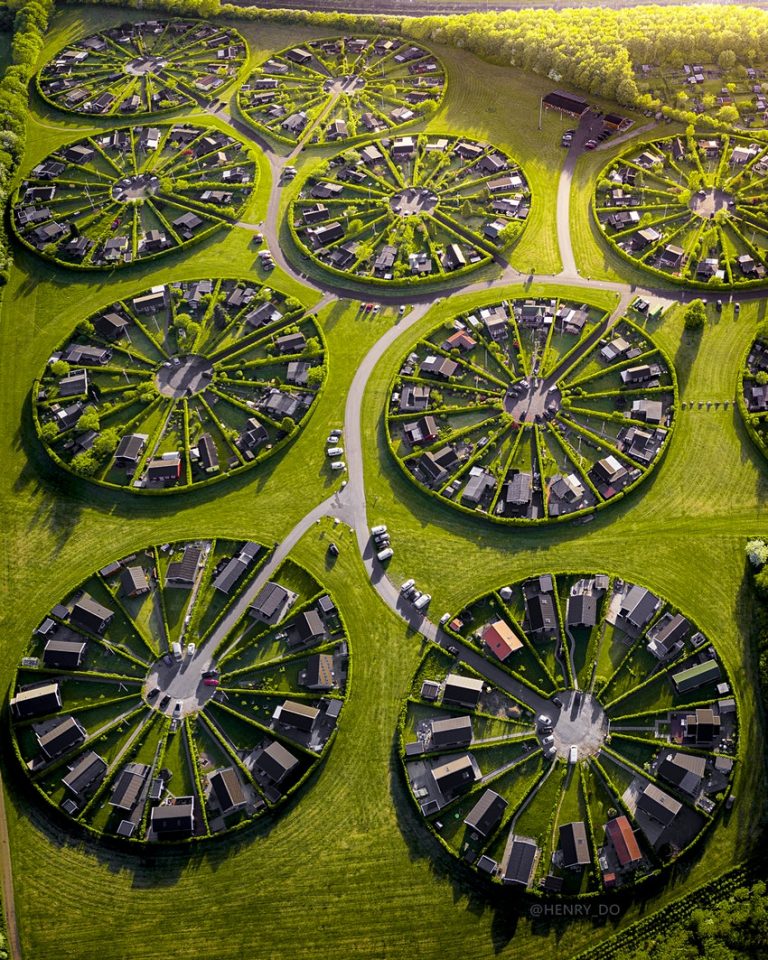 Have you seen Hollywood science fiction movies where everything from the costumes of the characters to the houses they live in and the vehicles they use seems out of the world! In Copenhagen, they have such an exotic place in a futuristic setting called Brøndby Garden City or Brøndby Haveby.

If you want to witness houses that seem straight out of the pages of a sci-fi book, you have to head to Denmark. Located just outside of the capital city Copenhagen, Brøndby Garden City.

The city was planned in a symmetrical design that looks too perfect to be true. The aerial shots of the city have left netizens gasping for words. The images shot by photographer Henry Do have been posted on Instagram and since then users can’t stop gushing over the place.

From the sky, the Brøndby Garden City looks like it is composed of perfectly circular gardens. It was designed by Erik Mygind, a maverick landscape architect, in 1964.

It is based on the concept of 18th-century Danish villages. The drone images captured by Henry Do are available on Instagram and also on the Lonely Planet site. The atmosphere prevailing in Brøndby Garden City is cozy, as the neighbors live in close proximity and they socialize much more than those living in typical urban setups.

The nice thing is that many residents of Brøndby Garden City own properties in Copenhagen or other cities and they use the garden encircled cottages as retreats.

Brøndby Garden City offers its residents a break from the chaos and pollution of regular city life. The clusters of houses have been set up to form circles with greenery surrounding each house. Viewed from the air, the symmetry is hard to miss.

Apart from the lush community gardens, the houses of Brøndby Garden City also have plenty of land used for gardening and yards. So the residents can indulge in hobbies they like, as and when they like.

However, the residents of Brøndby Garden City can’t stay there permanently. In the words of Redditor Zerak Tul: “It’s not actually a place where people live. They’re allotment gardens — i.e., a place for people who live in apartments in the city to have a little plot of land where they can do some gardening in the spring and summer months. Generally, there are laws that prohibit people from living in them full time.”

Are there any drawbacks?

The houses in this apparently utopian community are quite small, with the average size being just 50 square meters (60 sq yds). So a large family would find it difficult to stay there for long anyway. Those who have bought these houses stay there between April and October and also on weekends.

Interestingly, the houses are owned by the residents, but the gardens are rented. If you want to buy a house there, you have to own a permanent residence within 20 km (12.43 miles) of the city.

However, the houses are complete units with in-built sewer systems and feature electricity and running water. The owners are allowed to improve property facilities, like setting up solar heating systems.

How do the residents feel about life in Utopia?

What do the residents of the Garden City feel about the place? They are quite delighted with the experience. A Security Software Engineer, Lenni Madsen, whose parents own a house there says:

“Imagine your average small-time community, where everyone knows everyone else, you see each other across the hedge, perhaps sharing a beer or having coffee at each other’s houses. Then compare it to a flat scenario, where you hardly know anyone in your stairwell as most people are too busy and get inside their flat, having zero reasons to interact with their neighbors apart from complaining about the noise.”