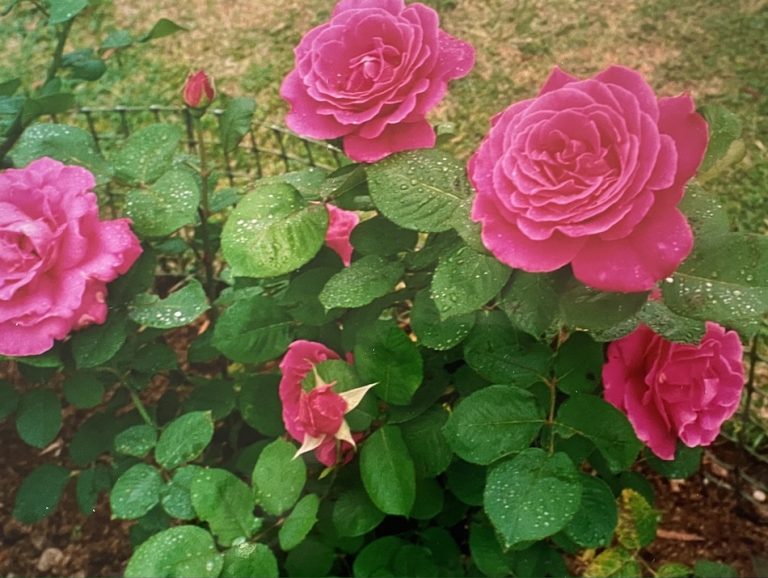 A rose from my mother’s garden. (Image: Trisha Haddock via Nspirement)

At a young age I enjoyed watching my mother paint flowers on porcelain. Her painting to me was amazing and inspirational. The bright cheerful geraniums, the gorgeous roses, lavender, and delicate irises growing outside in our garden also left an imprint on me.

I suffered from epileptic seizures from the age of 9 until I was 17. I was diagnosed in the 1980s and at that time, doctors did not have a complete understanding of treating epilepsy.

Doctors knew that medication helped stop a person from having epileptic seizures, although one could still occur taking medicine. I found it was also a taboo topic and I could not speak to people about my condition.

Having a seizure always felt strange and I never knew what had happened afterward. A person’s body shakes uncontrollably — they might pull at their clothes or they could bite their tongue.

I could never digest in my mind that I did all those funny things while having a seizure. I was always embarrassed afterward. My parents’ beautiful garden was a place I explored and this took my thoughts to a happy state of mind.

There were some warning signs

My parents noticed how I acted before a seizure began. Some warning signs were staring or daydreaming for too long. They would yell my name and this prevented many seizures from starting. Different types of epilepsy are treated differently and my parents knew how to act according to my circumstances.

My parents went to a conference about epilepsy and learned that rosemary and bananas could also trigger seizures. Fortunately, rosemary didn’t grow in our garden and my mother stopped buying bananas and cordial. What triggered my seizures was being overheated, too stressed, overtired, and having too much rich sugary drinks and food.

I saw all the commotion I was causing. With the new knowledge my parents told me, I decided to change. Most times, I was able to stop myself from starring or daydreaming along with noting when I was stressed to have rest.

I remember slipping into an unconscious state. I saw a lot of grey and I listened for my name, focusing on my mother calling me. Coming back to reality was no problem now.

Years passed by and I left school early because my ability to learn was too impacted. I was now taking new medication. At the age of 20, I had not experienced a seizure for a long time. Doctors were too afraid to take me off the medication. Doctors were not aware of what might occur if I took this medication for too long.

While working in a restaurant that lasted over the Christmas holidays, I unknowingly upset one of the cooks. His reaction toward me put me in shock. I suppressed the situation and decided to forget what happened. When I finished my job, I thought I would not go back.

My 21st birthday was a garden party in January and it was a wonderful birthday to remember. In the months to come, this year turned out to be the worst year of my life.

My hobby was painting on glass. It was an exciting medium to work with. I loved splashing the glass paints around. While working one day, I heard some voices, looked around, and no one was there.

These voices did not come from anyone, as I was alone. Where they came from I didn’t know, but this didn’t bother me. I continued to do everything expected of me. Everywhere I went I communicated well with everyone. For a couple of months, no one knew I had a huge problem.

The voices started to sound hateful and they became annoying. I started to do all sorts of things to get rid of them, but nothing worked. I was drained of energy and my neck and limbs felt weak.

Finally, I confessed my ordeal to the family doctor. I was then admitted to the psychiatric ward of a hospital. At the time, I thought I was at the lowest place I could get.

I watched the doctors study me like I was an alien. What would they do if I said something that they didn’t see as normal? The psychiatric ward felt like jail. I couldn’t go anywhere. I was given more medication on top of my epileptic medication.

The other patients in the ward were kind and friendly people. My heart panged as I heard their troubled stories of how they came to the hospital. I realized, there is always someone else who is worse off than you.

The medication I was prescribed to stop my psychosis was not working, it only made me tired with severe pains in my back. A friend recommended That I see a psychiatric doctor that they knew.

On my first visit, I completed some psychology tests that he gave me. I was told it was common for people with epilepsy to experience psychosis.

He also explained that if I only had had one psychosis, it didn’t mean I was going to be diagnosed with schizophrenia. I now took another type of medication to treat the psychosis and I improved.

I was released from the hospital. My mother took me to see a naturopath; to me, he seemed to have a wealth of knowledge. My body was lacking nutrients and he prescribed vitamins to me. The explanation was that the extra vitamins would make the doctor’s medication work more effectively.

Flowers to the rescue of the spirit

The next intriguing moment was when a book of Australian Bush Flower Essences was thrust in front of me. Each flower essence assisted a person’s emotions and physical condition.

At last, I was given a solution to try to solve my mental health problems instead of hiding them. The new type of medication for the psychosis was working better. By also taking the added vitamins and the flower essence drops, I began to feel much better.

My moods and life changed for the better and by November, I stopped hearing voices. I discontinued taking the psychotic medication and I had no reoccurrence of psychosis.

The naturopath’s vitamins and flower essences that I took kept me in a healthy mental state. Otherwise, I most likely could have relapsed into another psychosis. I now lived with a different understanding. I began to open up and talk with others about what I was experiencing.

A few years passed and I no longer needed to see the naturopath. I made sure I ate correctly. Absorbing the required vitamins and nutrients was now important to me. I also discovered Bach Flower Rescue Remedy. I began to use this flower remedy when I needed some stress relief.

Now I knew the hidden knowledge behind the flowers and their healing benefits. I began to study herbs and other plants. The essence of flowers can lift and balance your mind and body and help correct your outlook on life by reading about the inner meanings of flowers.

I weaned myself off the epileptic medication with the assistance of a medical physician at the age of 25. With a new way of thinking and caring for myself, I have been epileptic seizure- and psychosis-free for 23 years thanks largely to flowers.