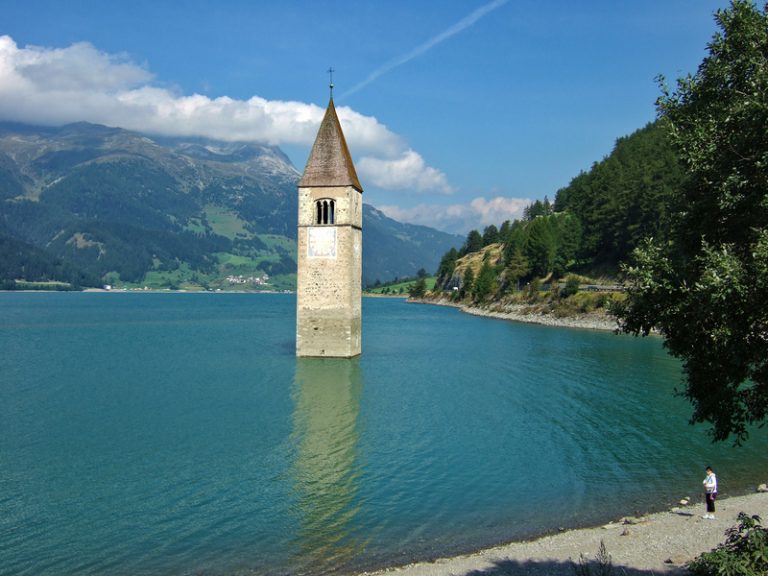 Sometimes, archaeologists come across remains of ancient civilizations purely by chance. Similarly, old era habitats, ancient relics, or a lost village, ruins of ancient cities devoured by natural or man-made calamities reappear when they are least expected, such as the lost village of Curon in Italy.

One such scene took place in Italy where the remains of a lost village emerged from the depths of a lake. Lake Resia was drained and then the drowned village, named Curon, was rediscovered by the locals. The village was drowned by design 71 years ago.

Lake Reisa is an artificial lake located in South Tyrol, Italy. The mountainous Alpine province is located close to the borders of Austria and Switzerland.

Before draining the lake, all the locals and tourists were able to see was the church bell tower peeking above the water. After the original village was flooded, a new village given the name Curon Ventosa was constructed. It overlooks the submerged village and has about 2,500 residents. The lake is 72 feet deep.

According to reports, the village used to exist until it was flooded to set up a hydroelectric plant back in the 1950s. The authorities set up a dam and they also merged two adjacent lakes, leading to the drowning of the village.

Lost village of Curon re-emerges from the deep

The discovery of the village has made the locals elated and the younger generation has become amazed at the sight of the remains. The images of the remains of Curon have been shared on social media sites.

The pictures of its eroded cellars, archways, exposed walls, and stone steps look vintage yet charming. A few locals have said seeing the remains once more evokes nostalgia in their minds. However, the houses in that village cannot be seen anymore.

Lake Resia is a popular tourist spot and the church tower emerging from the water is held in great amazement by visitors. The bell tower that remains visible throughout the year above the water level attracts tourists from around the world, who are also amazed at the sight.

In winter months, the lake freezes over and visitors can actually walk up to the historic bell tower. In fact, this is what played a key role in the region becoming a tourist magnet.

Many other relics from 20th-century history can be found in the South Tyrol region. The remains of cableways, bridges, and army bases set up during World War I can still be seen here.

Incidentally, Curon’s history inspired a filmmaker to make a documentary about the village. It was released on Netflix in 2020. Marco Balzano, an Italian author, composed a novel titled Resto Qui on the drowned village a few years back as well.

The region, namely South Tyrol, was annexed by Italy after the end of the First World War. The area is inhabited mostly by native German speakers. Post annexation, the Italian government ruled by Benito Mussolini decided to flood the area and thus Lake Resia was born.

The authorities went ahead with their plans despite objections from the locals. Nearly 150 families were displaced. A number of the villagers were forced to emigrate.

It was in April this year that the missing village started resurfacing. The lake was drained to carry out repair work on the hydroelectric plant. However, locals and tourists were able to see the remains later owing to the pandemic restrictions.

The ancient village will remain visible only for a few weeks or so, as the area will be submerged again.