The Missing Chapter of ‘The Tale of Genji’ Found In Tokyo 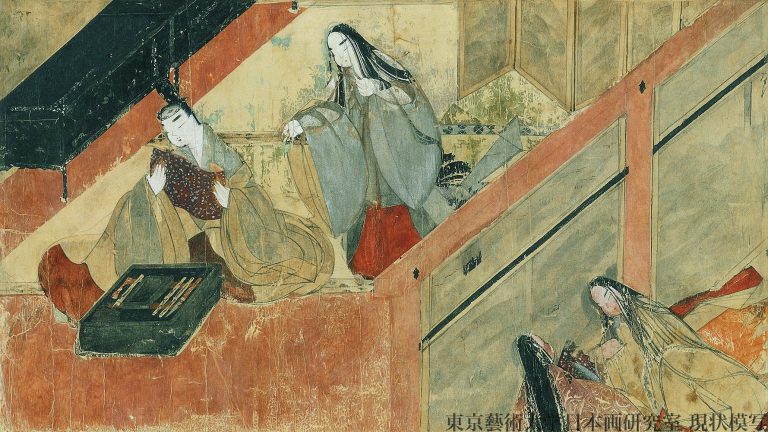 The missing chapter of the first-ever novel 'The Tale of Genji' was located in a storage room in a Tokyo house. (Image: Public Domain)

Some discoveries of missing or little-known relics and historical objects can make you stunned. This is what happened when the missing chapter of the first-ever novel, The Tale of Genji, was located in a storage room in a Tokyo house. The Tale of Genji was composed sometime in the 11th century. The house belongs to the family of Motofuyu Okochi and it was kept in the house for nearly 3 centuries.

The Tale Of Genji is an ancient tale with a Japanese premise and it is adored by book lovers. The original manuscript, written by a noblewoman named Murasaki Shikibu, does not exist anymore. The version that historians were aware of was preserved by Fujiwara no Teika, a poet, in the form of a 54-chapter manuscript.

The work recounts the life of Hikaru Genji, or “Shining Genji”, the son of an ancient Japanese emperor, known to readers as Emperor Kiritsubo, and a low-ranking concubine called Kiritsubo Consort. For political reasons, the emperor removes Genji from the line of succession, demoting him to a commoner by giving him the surname Minamoto, and he pursues a career as an imperial officer. The tale concentrates on Genji’s romantic life and describes the customs of the aristocratic society of the time. It is considered the world’s first novel, the first modern novel, the first psychological novel, and the first novel still to be considered a classic.

The chapter found in the Japanese home covers the meeting of protagonist Hikaru Genji and Murasaki-no-ue, who would become his spouse in the future. The old manuscript was in a chest that belonged to Motofuyu Okochi. The latter is a descendant of the Mikawa-Yoshida feudal clan. The Okochi family reportedly got the rare manuscript from another family.

Missing chapter of ‘The Tale of Genji’

Reizeike Shiguretei Bunko, a cultural foundation, assessed the authenticity of the new chapter. They declared it was real. The chapter is entitled Wakamurasaki. The similarities with the rest of the novel are prominent. The handwriting is similar and the manuscript has a blue front cover. The chapter will be preserved as Japan’s official cultural property.

Kyoto University of Advanced Science’s Professor Junko Yamamoto lauded the discovery, saying it holds immense value for scholars. The Tale of Genji gives readers an idea of the lives of Japanese royal families. It also shows the nuanced sexual politics prevalent in 11th-century Japan. Critics have praised the depiction of various aspects of royalty in Japan in the Heian period in the novel. The author has excelled in portraying the characters in the work. Murasaki Shikibu was not her real name, but historians agree that she belonged to a royal family and wrote the novel using her personal knowledge and experience.

Harvard University professor Melissa McCormick, who teaches Japanese art and culture, thinks the novel is a significant work of literature. She said: “Murasaki Shikibu was writing in a mode of literature that was, at her time, fairly denigrated. Fiction was at the lower rung of the scales of the genre hierarchies … but she produced such an incredible tour de force work of literature that it had to be taken seriously.”

It was in February that Motofuyu Okochi found the novel manuscript in his storeroom and then he contacted the foundation. The Heian period novel is deemed valuable by historians. The ancient novel retains its appeal among readers. It has inspired a number of interpretations and adaptations over the decades.

This discovery reaffirms that Japan is home to a number of revered religious shrines and cultural developments. Before this discovery, researchers could locate only four transcriptions done by the poet Teika.