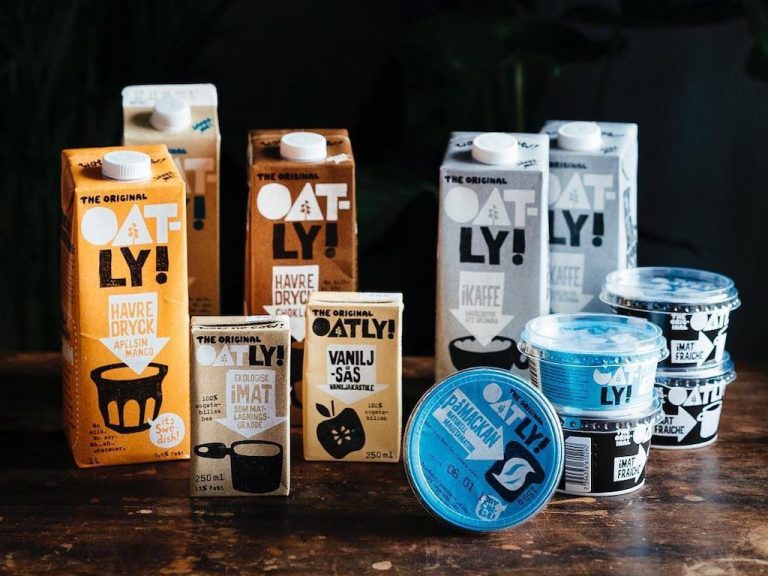 Oatly is eying up its closest rival in the UK as it plans to set up a factory some 20 miles or so from British family-owned Glebe Farm Foods in Cambridgeshire. (Image: via Oatly)

Fresh from its fight to overturn recent losses and gain a US$10 billion IPO, reinvested Oatly is eying up its closest rival in the UK as it plans to set up a factory some 20 miles or so from British family-owned Glebe Farm Foods in Cambridgeshire.

Glebe Farm Foods is known as “the largest certified gluten-free oat manufacturer in Europe and supplies oats and cereals to many retailers and foodservice operators across the UK and Europe.” The company produces the barista drink PureOaty, a gluten-free oat drink sold through wholesalers and suppliers by milling oats from its farm.

The case has caused confusion among consumers, with many taking to social media to compare the packaging of the two products side by side. The Vegan Review compared six popular oat milk drinks found in the UK in 2020, and PureOaty was not one of them. But as each carton contained the word oat, does that mean the word “oat” has the IP?

Agricultural forums sprouted their views, with one member summing it up: “The issue isn’t the product, the issue is corporate control, same as any other agricultural output.” Another member posted, “Look who backs them… it’s all about money and not environment/ethics.”

There are links between Oatly and Mainland China’s Communist Party (CCP) through a majority investment by the CCP using Blossom Key Holdings, owned by state-backed China Resources Co., in a joint venture with Belgian Verlinvest since 2016. According to Bloomberg, this gives the two companies control of 60 percent of Oatly, and both have three directors on the board.

Oatly’s use of Alibaba’s distribution network in China, where it enjoys market share through Starbucks, means more contact with the CCP, which has been embedding Party officials in Alibaba since 2012. Forbes reports how the CCP has secretly built Alibaba from the inside out into a public listed company, which it controls. However, most unsuspecting investors remain unaware of the control behind their portfolios. In 2019, news outlets reported that the CCP started putting Party members into companies in critical industries worldwide.

David Moschella and Robert D. Atkinson, from the non-profit think tank Information Technology & Innovation Foundation (ITIF), explain how China will “likely be the biggest business disruptor of the 2020s.” They believe: “The four key dimensions to national economic competition are being a market, a competitor, a supplier, and a geopolitical rival.” Applying this analysis, China uses all four dimensions to take over market sectors, such as cars, smartphones, IT, and electronics, to name just a few.

Oatly is not the first Swedish business to be bought up by Chinese investment. Reuters cited the Swedish Defence Research Agency (FOI), where “Chinese firms have bought or invested in 65 Swedish companies since 2002, including multi-billion dollar deals such as Zhejiang Geely’s acquisition of Volvo cars and the purchase of a stake in truckmaker AB Volvo VOLVb.ST.”

Oatly’s expansion into the UK

Oatly’s expansion into the UK by creating a production plant and making an IP challenge against Glebe Farm Foods could fit the profile of a Chinese company entering a new market and starting a price war by undercutting its closest competition. According to Bloomberg Businessweek, “the China Price” is always “30 to 50 percent less” than the market average price. However, as Chinese consumers now equate price to quality and status symbols, it is unlikely that Oatly can use the strategy of cutting its prices.

Hence, it is much more likely that the formerly Swedish-owned company is trading off its “snob appeal” gained through its relationship with Starbucks in China and the U.S. The Harvard Business Review described, how to the Chinese, Starbucks confers prestige by sitting in the coffee chain after buying a latte and being seen using a laptop in the café itself with the said drink.

In the academic paper The Art of Price War: a Perspective from China, John Zhang and Dongsheng Zhou consider that: “A ‘shock and awe’ strategy can quickly convince an inefficient rival to get out of the way, as any resistance is either futile or fatal.”

Could this be the motivation behind the shock IP case heard in the Intellectual Property Enterprise Court (PEC) at the Royal Courts of Justice in London on June 9 and 10? The legal challenge is: “PureOaty brand infringes its Oatly and Oat-ly! trademarks brought by Oatly… Oatly is seeking to force Glebe Farm Foods to recall and remove its product from sale, ditch the PureOaty brand, and potentially pay damages.”

The Financial Times also reports how the lawsuit alleges that Glebe Farm Foods caused an oat supply shortage when it launched its oat drink some 18 months ago, affecting the U.S. Oatly supply chain. “Ishan Paran, general manager of Oatly’s UK arm, told the court on Wednesday he suspected the launch of PureOaty was linked with supply shortages of Oatly reported in 2019.”

Yet Bloomberg listed a recent supply chain “delay related to the coronavirus pandemic in the construction of a production facility” when Starbucks expanded the sale of Oatly products across its 15,000 U.S. cafés in March 2021, just before the IPO in April.

Oatly’s Twitter feed reflects that shortages have been regularly reported due to a mismatch between demand, production, and supply since 2017, just after it gave up ownership control to the CCP. A post by a coffee shop on October 5, 2017, reads: “UK-wide shortage of Oatly Barista is because #Oatly launching in the U.S. Seriously? can’t even keep up with the demand in the UK” The same happened again in October 2018 with Oatly advising Sky News “it was experiencing ‘unprecedented demand’ that far outstripped supply.”

Glebe Farm Foods uses its own British oats grown in the UK to produce its products and has a dedicated gluten-free mill for purity to protect consumers. Its oat drink contains just four listed ingredients and the oats are grown within 75 miles of the farm, making the supply chain and carbon footprint very low, enhanced by the renewable energy-driven plant. The company posted a net profit to March last year of less than £5 million (US$7.1 million).

The Wholesale Manager reported that the British brand never uses oat-based syrups in its production. An important fact to be aware of as a food blogger recently compared the sugar content of a 12-ounce latte made from Oatly to the equivalent of drinking a can of full-sugar coca-cola after finding they contained the same amounts.

The case verdict will take several weeks. Glebe Farm Foods were represented by trademark disputes experts at Bristows, led by Jeremy Blum. A post by the owners of Glebe Farm Foods reads: “We will update what happens when we know what the ruling is, and in the meantime will focus on what we prefer to spend time on: delivering our delicious PureOaty oat drink to discerning customers across the UK and beyond.”