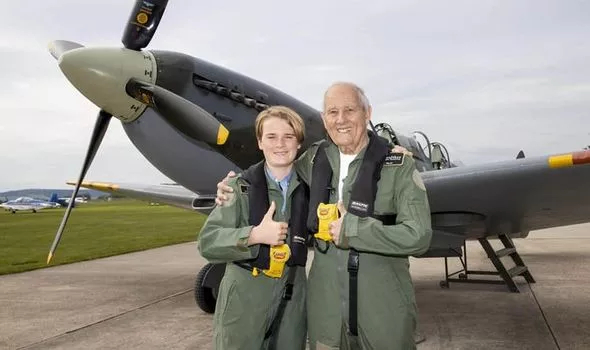 A 12-year-old boy in the UK made his grandfather's dream of flying in a Spitfire come true. (Image: via Steve Reigate / Daily Express)

Malcolm Hanson has dreamed of flying in a Spitfire since he was a boy during World War II. It is not uncommon to see people willing to go to any lengths to make the dreams of their loved ones become a reality. However, few kids have the drive to put in that type of effort. A 12-year-old boy in the United Kingdom named Harrison Gurney has achieved that feat by making his grandpa’s dream of flying in a spitfire a reality.

Hanson had been feeling worried and lonely after his wife was taken to live in a care home due to Alzheimer’s disease, and with his 80th birthday getting close, his grandson came up with a plan to cheer him up.

Mr. Hanson has a love of old airplanes and the Spitfire is a particular favorite. As a child during World War II, he saw one battling an enemy plane in 1945. Ever since witnessing that “dogfight,” he has dreamed of flying in a Spitfire.

Sharing his grandfather’s interest in World War II and having listened to him talk about those days and his recollections, Harrison was well aware of the unfulfilled dream. He wrote many letters to private Spitfire owners and airfields across the UK in the hope that he could help make his grandpa’s dream come true. Eventually, his efforts yielded results.

Mr Hanson’s flying in a Spitfire becomes a reality

The Goodwood Aerodrome authority in West Sussex found his letters heartwarming. They offered to let both the boy and his grandfather experience flying in a Spitfire plane. Mr. Hanson got the surprise of his life. He even took control of the plane for a while. He said: “It was absolutely fantastic; it was the most amazing experience I have ever had to have been allowed to take control of the Spitfire. The pilot did barrel rolls and some dives, it was great fun — a brilliant day out, all thanks to Harri.”

Mr. Hanson was both delighted and amazed with the development and he could not stop gushing about his grandson. He added: “It’s a life-long dream come true. Harri knew that and went and made it happen. He sets his mind on something and follows it through. We’re very proud of him.” He could have never imagined that his 80th birthday would turn out to be such a very special one thanks to the efforts and generosity of his grandson.

The rest of the family was also delighted with the development. Mr. Hanson’s daughter, Charlotte, said her mother’s illness had cast a shadow on everyone’s minds. Despite every measure taken, her health was declining, and sending her to an assisted care facility was the only logical option left for them. It was especially hard for Mr. Hanson and he was left lonely and dejected. Charlotte is glad that her son could realize how his grandfather was feeling and that he took the initiative to amaze him on his birthday.

To keep the surprise element intact, Mr. Hanson was not informed about the vintage plane ride in advance. Despite his age and health conditions, Mr. Hanson did not feel scared about flying and the fact he was accompanied by his grandson made him cheerful. According to Mr. Hanson: “There’s nothing better that I could have received than a chance to go up in a Spitfire.”