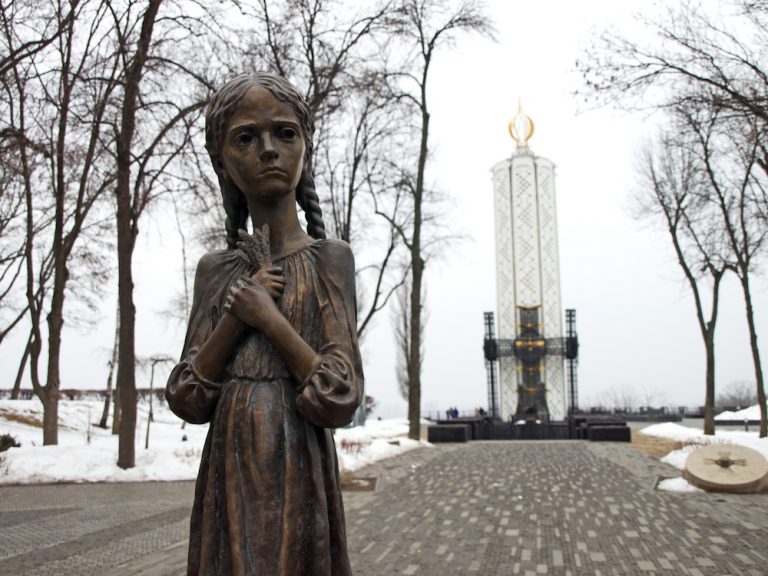 Memorial to the Holodomor victims in Kyiv. The Holodomor was a manmade famine in the Ukrainian part of the Soviet Union in 1932–1933. (Image: 23827804 / Holodomor © Natalkaprague | Dreamstime.com)

To revoke or not to revoke? That might be something the Pulitzer Prize board is again asking itself after the launch of a petition seeking the revoking of a 1932 Pulitzer Prize given to The New York Times journalist Walter Duranty, who tried covering up a genocidal famine in the Ukraine that killed millions.

The New York Times journalist, British-born Walter Duranty, was the paper’s man in Moscow during the 1920s and 30s and his writings at the time were considered influential.

Today, however, Duranty is recognized as an apologist for communist dictator Joseph Stalin and for also denying reports about a Soviet engineered famine that targeted the Ukrainian peasantry during 1932-33. The famine, known as the “Holodomor,” which means murder through starvation, was mainly the result of the forced collectivization of farms.

Recently, the U.S. Committee for Ukrainian Holodomor Genocide Awareness called upon the public to support the petitioning of the Pulitzer Prize Board to revoke Duranty’s prize. It’s worthwhile repeating most of their appeal below.

“Walter Duranty was the recipient of the prestigious Pulitzer Prize in 1932 for his reporting in The New York Times of Joseph Stalin’s collectivization program, called The Five-Year Plan, which served as a vehicle for the genocide of 7-10 million Ukrainians, called Holodomor,” the committee wrote. “Denying publicly any famine, Walter Duranty did in private acknowledge Stalin’s atrocities but continued to lie in order to have access to Stalin,” they said.

“The Pulitzer Prize is a distinguished and highly coveted award given to deserving journalists who stake their reputation on the truth. In Duranty’s case, it was given to a man who did not live up to journalistic ethics or standards of the award, but instead spread false news worldwide about a totalitarian regime.

“The Holodomor was the biggest cover-up of the 20th century. It is still not very well known, since it was silenced for over 50 years, and truthful journalists were negated and mocked by Duranty, who was considered the authority on everything Soviet.”

The petition made the point that this is not the first time there has been a push to revoke the prize given to Duranty.

“In 2003 after a comprehensive international campaign launched by the Ukrainian community and a study undertaken by Columbia University’s Professor Mark von Hagen, The New York Times and the Pulitzer Prize Board concluded that “there was no clear and convincing evidence of deliberate deception” to remove Walter Duranty’s Pulitzer,” the committee said.

“After nearly 90 years, journalistic ethics and the truth about Stalin’s genocide of the Ukrainian nation need to be recognized. Crimes against humanity deserve accountability. Stripping Walter Duranty of his Pulitzer Prize would be a grand gesture of atonement for the wrongs committed by The New York Times and the Pulitzer Prize Board. Revoke!”

It should be noted that The New York Times has denounced Duranty’s reporting, with the paper saying in an online statement that its “correspondents and others have since largely discredited” Duranty’s coverage. It also offered some explanations.

“Duranty’s cabled dispatches had to pass Soviet censorship, and Stalin’s propaganda machine was powerful and omnipresent. Duranty’s analyses relied on official sources as his primary source of information, accounting for the most significant flaw in his coverage — his consistent underestimation of Stalin’s brutality,” said the statement.

“Since the 1980s, the paper has been publicly acknowledging his failures,” said the statement. “The Times does not have the award in its possession,” it added.

The Pulitzer Prize Board in 1990 reviewed their award for Duranty, but they decided not to revoke it. The board issued a statement in 2003 stating that the award given to Duranty was for 13 articles in 1931 submitted for the 1932 Pulitzer Prize. These articles were written before the famine.

“The famine of 1932-1933 was horrific and has not received the international attention it deserves. By its decision, the board in no way wishes to diminish the gravity of that loss,” the Pulitzer Prize Board said.

“The board extends its sympathy to Ukrainians and others in the United States and throughout the world who still mourn the suffering and deaths brought on by Josef Stalin.”

Not only did Duranty deny the famine, but he publicly downplayed accounts written by journalists who managed to report on what was occurring in Ukraine. Among the journalists who reported on the famine were Malcolm Muggeridge, who was a correspondent for The Manchester Guardian, and Welsh freelance journalist Gareth Jones.

Jones’ experiences reporting on the famine were made into a 2019 film Mr Jones. The film was directed by Agnieszka Holland and featured Peter Sarsgaard playing the role of a morally corrupt Duranty.

Muggeridge managed to send his reports on the famine back to the UK secretly via British diplomatic bags. In a 1982 interview, he described Duranty as abhorrent.

“When it came to the great famine in Ukraine brought about by collectivization that was when his reporting was particularly disgraceful because he denied there was any famine,” Muggeridge said during an interview for the documentary film Harvest of Despair.

“And we used to wonder in fact whether the authorities had some kind of hold over him because he so utterly played their game,” he said.

Muggeridge said that Walter Duranty’s articles were viewed as “very valuable evidence” for the U.S. government to recognize the Soviet Union.

He added that Duranty was respected because of the “prestige of The New York Times” and that “secondly, he was quite a good writer, he made it sound all plausible. Thirdly, there were a lot of people who wanted to hear that, who wanted to believe that, all was well. And he simply conveyed the Party line.”

According to the film Harvest of Despair below, Walter Duranty said in private conversations at the British Embassy in Moscow that he had thought as many as 10 million people had died in the famine.