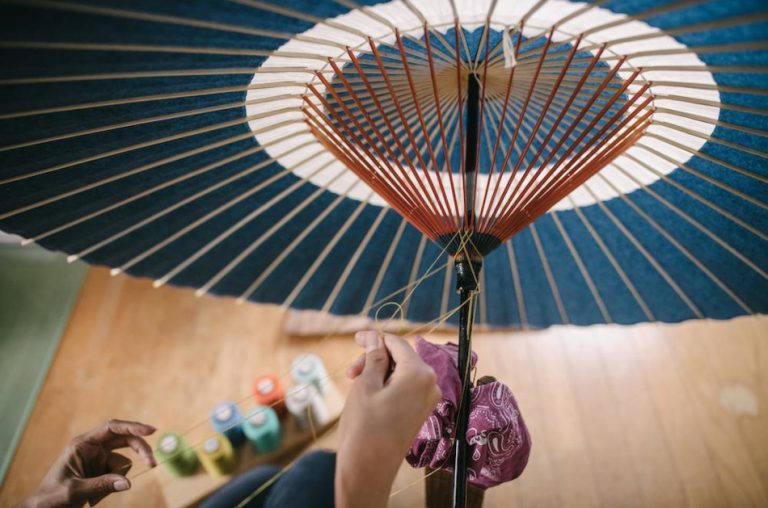 Wagasa, or washi paper umbrellas, are handmade from wood, bamboo, paper, and thread, and they have found a new lease on life as a luxury item in Japan. (Image: via Irwin Wong, Handmade in Japan, gestalten 2020)

When you think of things that come from Japan, your first thought will likely be of high-quality electronics or maybe matcha tea, wagyu beef, sake, or some other consumable product. However, not many people know about Japan’s traditional handicrafts and art traditions. In Japan, you can find the finest specimens of handicrafts made from various materials like wood, bamboo, and cast iron.

A discussion on Japan’s traditional handicrafts can never be complete without mentioning ceramics. Japan’s traditional pottery is loved for its unmatched transcendent simplicity as well as its intricacy. Japanese papercraft is also much sought after. The famous washi paper lanterns are much in demand in Western nations. These handicrafts appeal mostly to sustainability-minded users and have survived the ordeals of time.

Some of Japan’s traditional handicrafts are linked with its martial past. For example, samurai armor smiths are few in number today, but they cherish the long-surviving craft form. Satoshi Tachibana, a Fukushima-based samurai armorsmith, nowadays repairs existing armor suits. Long back, he was habituated to designing such metal suits from scratch. These suits are worn mostly during historical festivals. They are lightweight and flexible, and they are made with plates of iron.

The Japanese also make elegant longbows. They are designed in Miyakonojo, Miyazaki Prefecture, by some master craftsmen. These are still used in archery competitions. Another ancient weapon, the samurai sword known as a katana, is still made using centuries-old crafting methods. These craftsmanship techniques have been handed down through generations in Japan. Such swords have little use in present times. They are used mostly for ceremonial purposes. However, the Japanese have a skill with blades, and the knives they make are much in demand, with a price that can tax your wallet as well.

Japan’s traditional handicrafts are rooted in their past. However, there are a few regions in the country that are deemed as leaders in craftsmanship. The noteworthy ones are Aritayaki of Saga Prefecture, Bizen Yakimono in Okayama Prefecture, and Kutani Yakimono, belonging to Ishikawa Prefecture.

Japan’s traditional handicrafts also include paper parasols and kites. Both these products are made using bright paints. Washi paper umbrellas were in vogue in Japan in the past. However, the influx of affordable foreign-manufactured umbrellas dented the market and their appeal to an extent. The nice thing is that interest in Japan’s traditional handicrafts is being revived. These umbrellas, which are made using paper, wood, and bamboo, are considered nothing short of engineering marvels.

As for kites, they were flown mostly during major Buddhist rituals and events in Japan. However, nowadays kites are flown also for recreation. Traditional Japanese kites are made with delicate bamboo frames and washi paper. The decoration and construction involve a high level of technical acumen.

In the northern part of Japan, on the island of Hokkaido, barkcloth is woven according to the tradition of the Ainu ethnic tribes. The bark is derived from elm trees and then it is processed and dyed with nature-sourced colors. Then, extremely durable cloth is made from it.

japan’s traditional handicrafts also involve the creation of utilitarian items that can be used in households on a regular basis. Even then, the stamp of craftsmanship and artistic acumen is hard to miss. The Nara Prefecture craftsmen are known for making stellar tea-whisks. The whisks are made using one piece of bamboo and these are used in Sado, a traditional Japanese tea ceremony.

In Kumano town in Hiroshima Prefecture live the legendary brush makers of Japan. They produce 80 percent of all brushes manufactured in the country. They focused on making calligraphy brushes in the past, but these days they make makeup brushes. The brush manufacturing method is largely manual and minute details are maintained.

There is a salient quality to all of Japan’s traditional handicrafts regardless of the material used. These handicrafts look elegant and are very durable. Kengo Kuma, a noted Japanese architect, says that Japan’s traditional handicrafts stand out for their inherent peacefulness and gentleness. It is a fact that even the Japanese knives and swords evoke an aura of unexpected calm. While observing Japanese craft items, you can feel they were made in a peaceful, tranquil manner and that quality remains long after manufacturing.