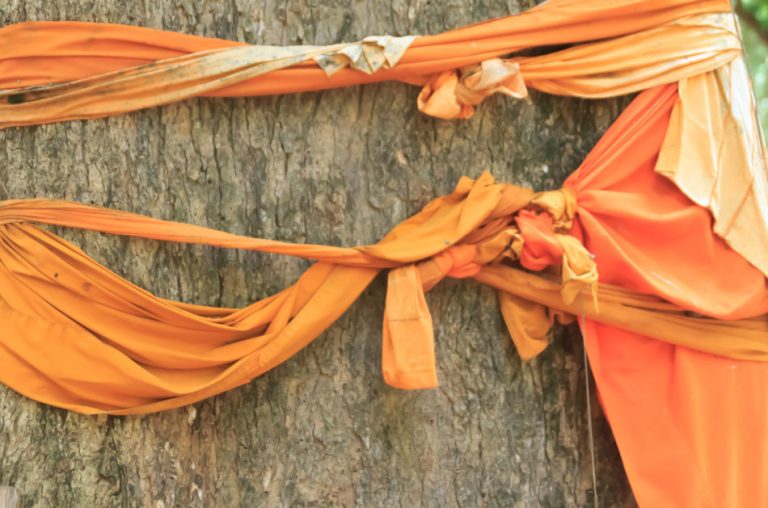 Starting at the end of the 1980s, monks in Thailand began to hold ceremonies to ordain trees just as they would perform them for a new monk who took up the faith. (Image: Kampwit via Dreamstime)

With more and more development taking place in Thailand, the country is seeing a rise in deforestation. Land is being cleared to make way for factories or contract farming and this has resulted in massive floods during the rainy season. A group that has come to be known as “ecology monks” has set out to change the situation in Thailand by performing tree ordinations.

Starting at the end of the 1980s, monks in Thailand began to hold tree ordinations just as they would perform them for a new monk who took up the faith. It is not only taboo but also illegal in Thailand to harm an ordained monk, so once these ceremonies were performed, the forest would effectively be protected from illegal logging activities.

Ecology monks perform tree ordinations to save the environment

The ecology monks are trying to bring Buddhist principles into the environmental movement and encourage their followers to put a stop to unsustainable development. According to Dr. Susan Darlington, professor of anthropology and Asian studies at Hampshire College in the U.S. and author of the book The Ordination of a Tree, the Thai Buddhists consider protecting trees to be a form of merit-making, and they believe that if they accumulate enough merit through doing good deeds, their next life will be better and they will be a little closer to achieving enlightenment.

She says: “Making merit is extremely important for Thai Buddhists. They see [tree ordinations] as an act of making merit, which can help with rebirth and, in some cases, having a better life now.” (The Interfaith Observer)

Looked at in another way, one of the core principles in Buddhism is to alleviate suffering. While the ecology monks don’t want the trees to suffer by being cut down, they are also concerned about all the damage that can come to the land and the people who depend on it if unsustainable development practices continue.

Conservation Program Manager Gordon Congdon of World Wildlife Fund-Thailand says: “There are places in Northern Thailand, particularly in Nan Province, where there has been a lot of deforestation, so the watersheds areas fill the water with mud, silt, and pesticide runoff causing more severe flooding in the rainy season and more severe drought in the dry season.” (The Interfaith Observer)

Buddhism’s followers are traditionally known for being detached from society so they can devote themselves to their spiritual development, but the ecology monks say that their religion is tied to nature. According to Phrakhu Win Mektripop, an ecology monk based in Bangkok: “When the Buddha was born, he was born under the tree. He was enlightened under the tree. His first sermon was under the tree. We can see that most of his life was related to the forest.” (The Interfaith Observer)

Phrakhu Sangkom Thanapanyo Khunsuri, a well-known eco-monk, has set up Maab-Euang Meditation Center for Sufficiency Economy, a traditional farming school in the Thai province of Chonburi. He teaches students a theory known as “sufficiency economy,” the brainchild of the previous Thai King Bhumibol Adulyadej. It covers self-sufficiency and subsistence farming while also stressing that people need to be detached from material goods.

Some Thai NGOs and universities are following in the footsteps of these new-era monks. One such prominent entity is INEB, the International Network of Engaged Buddhists, which is working to connect activists across Asia.

INEB’s Executive Director, Somboon Chungprampree, says: “We are figuring out how we can bring the Buddhists who are just sitting and meditating out into the world to deal with the suffering. There is not just personal suffering; there is social and environmental suffering out there, and people need to figure out how they can help as a Buddhist.” (The Interfaith Observer)