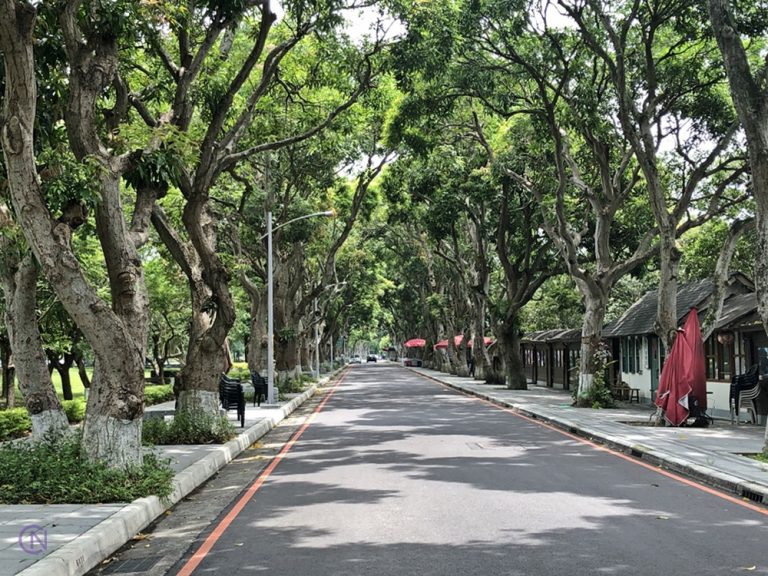 Along this stretch of the highway, the large leafy mango trees planted in an orderly array on both sides of the highway naturally form a spectacular tunnel-like canopy of deep green.

Please watch the following video of the Spectacular Green Tunnel in Southern Taiwan.

Origin of the green tunnels

In 1941, to commemorate the 2,600th anniversary of the founding of the Empire of Japan, the Japanese government mobilized local residents to plant 3 to 4 trees per household on the two sides of the highway and its two feeders.

Following the Japanese government’s footsteps, the Taiwanese government planted over 1,000 mango trees on the two sides of the highway in the 1960s. All of these trees belong to the so-called “Tu Mango” (indigenous mango), which is the species introduced to Taiwan in the 17th century by the Dutch. Since this species has gradually adapted to the weather of Taiwan, it has been regarded as the indigenous mango.

In 1984, the government planned to fell over 100 large mango trees in Gukeng Township for a road-widening project. With civic groups’ repeated appeals, the government then constructed an alternative route. As a result, not only has the green tunnel been preserved, but it has also become one of the popular attractions in this agricultural county.

Other highlights of Gukeng Green Tunnel

Along the green tunnel, Taiwan Sugar Corporation’s abandoned small train tracks, stations, and carriages, as well as other amenities are all well maintained. They have added some cultural connotations to this attraction.

In the green tunnel, there are dozens of unique wooden train carriage-like stores established in line on the sidewalk. A variety of snacks and other local delicacies are sold at the shops on holidays. These distinctive stores are decorated with various eye-catching images introducing local specialties.

Dedicated to honey, there are various honey-related exhibits, a large beehive model, a cute bee mascot, and some large bee models scattered around the museum. Additionally, there are story-telling and DIY corners in the museum, where visitors can gain some further insight into bees and honey. A variety of honey-related foodstuffs are also sold in the museum, ranging from honey and honey wine to honey cookies, etc.

Outside the museum, there is a lush lawn with an old ox cart, some honey-related art installations, dozens of colorful wooden beehives, and an open-air café on the wood-plank floor in the shade of some big trees.

With an area of about 3 hectares (7.4 acres), Gukeng Green Tunnel Park is adjacent to the green tunnel, where visitors can take in many leafy trees, pavilions, lush lawns, and an eco-pond, and stroll along the walking trails. It is a good place to take a walk there after visiting the tunnel.

228 Memorial Park is another hot spot for photography in the area. The most striking part is the 228 Monument. With a base diameter of 23 meters (75.4 ft), and a height of 24 meters (78.7 ft), the monument is mainly composed of two curved square columns, and two square rings circling the two columns.

The design of the monument is quite special. The two curved square columns represent the Arabic numerals of “22,” while the two square rings in a horizontal position denote the Arabic numeral “8.” As a result, the appearance of the monument resembles the numerals of “228” (February 28), which is the date of Taiwan’s white terror that occurred in 1947.

Gukeng Green Tunnel is a perfect destination for a small family outing, where visitors can enjoy Gukeng coffee and other local delicacies, stroll under the trees to catch some fresh breeze, and have a leisurely bike ride along the greenery. But it is a pity that the attraction and the adjacent amenities are closed temporarily due to the COVID-19 pandemic.