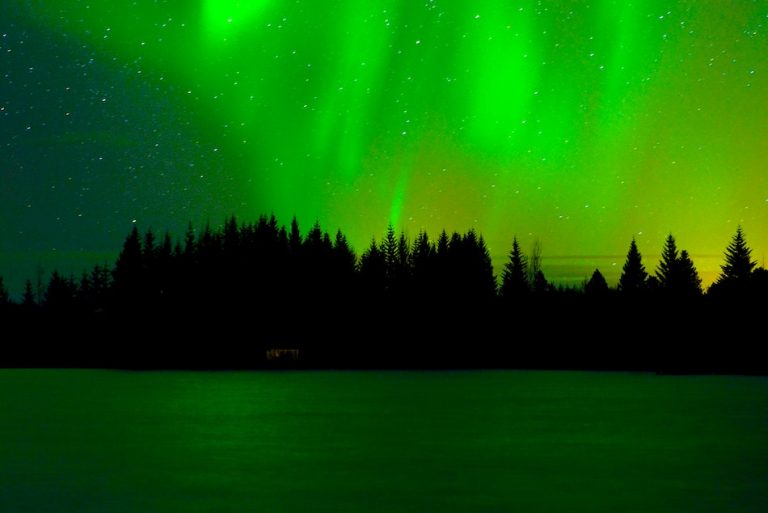 'Green is the prime color of the world, and that from which its loveliness arises.' — Pedro Calderon de la Barca. (Image: via Kristjan Sverrisson via Unsplash)

How does the color green make you feel? Green is often connected to nature and the environment, so it is no mistake that green is a refreshing color that calms and relaxes you.

Green is a combination of yellow and blue. While a red light tells you to stop, green indicates it’s safe to go. In Ireland, green is the national color. Optimistic and symbolizing good luck, it is the color that brightens the streets on St. Patrick’s Day with shamrocks and leprechauns.

There is the saying “green with envy,” and green is also representative of money. In South American cultures, green represents death. In Chinese culture, wearing a green-colored hat for men is taboo because it suggests the man’s wife is cheating on him. And for many, green is a color that evokes creativity.

Here are some incredible things to explore across our globe, spotlighting the color green.

Japan’s breathtaking Arashiyama Bamboo Grove is a calm and serene place to visit. You can walk through the winding roads that weave their way through the carefully planted tall bamboo plants. The plants reach a high of 165 ft (50m) and you can hear the unique sound of stems and leaves rustling as the wind blows through these bamboo groves.

Known for its historical beauty and surrounded by the forests of Urubamba (Cusco), Machu Picchu is the most amazing construction of the Inca Empire. It is made up of 150 buildings ranging from baths and houses to temples and sanctuaries.

The Incas’ masonry skills were impressive, to say the least. The structures were built with a technique called ashlar — stones cut and put together without mortar — yet the job was so precise that not even a knife or blade can fit between the stones.

The surrounding area is filled with varied flora and fauna, as well as wooded areas, steep mountains, and snow-capped peaks.

Found in the wet tropics of Australia and often hanging out around toilets and drainpipes, the common green tree frog (Litoria caerulea) is a vibrant green with golden eyes. They have a cute little face, and they sometimes have white spots on their sides and back. Those who live near this animal will be familiar with its call — brawk-brawk-brawk. It uses this to let other frogs know it is near, as a mating call, and to signify danger.

The stunning Five Flower Lake (五花海, Wǔhuā Hǎi) can be found in the north of Sichuan Province in southwestern China. It is a shallow multi-colored lake whose bottom is crisscrossed by ancient fallen tree trunks.

The area covers 107,639 square yards (90,000 square meters) with an altitude of 8,109 feet (2,472 meters), and an average water depth of 16.5 feet (5 meters). Emerald green, royal blue, orange-yellow, and light red are the colors of the lake from travertine deposits on the lake floor, the different colored algae, and submerged plants. These five colors lead to the name Five Flower Lake.

The northern lights, also known as the Aurora Borealis, would have to be one of the most fascinating natural phenomena. At night, green rays of light fill the sky with a magical dance.

The mythology surrounding the northern lights in cultures over the world is so interesting. Chinese legends interpret the Aurora Borealis as a celestial battle between good and evil and the light is said to represent dragons who breathe fire across the firmament.

Native Americans of the Algonquin tribe say it is light from their creator (Nanahbozho) and his way of telling people he remembers them and is watching over them.

A Norse legend suggests that the lights are the reflections or glow from the shields and armor of the Valkyrie, female warriors who die in battle.

Surrounded by dramatic mountains and beautiful fjords, Tromsø itself is in the middle of the auroral oval — an area with the highest probability to see the northern lights.

Pimientos de Padron is a famous dish from the municipality of Padrón in the province of A Coruña, Galicia, northwestern Spain. It’s a simple but tasty recipe fried in olive oil and salt. The exciting thing about this dish is that 1 out of 10 green peppers are wildly hot, so it’s a bit like a game of Russian roulette when eating this mouthwatering Spanish dish.

Tuscany is a region in central Italy, the birthplace of the Italian Renaissance and home to many great historical figures that influenced history, art, and science. Florence is the capital of the region that hosts many of the great works of art at the incredible Uffizi. Wine in the region is highly regarded and with landscapes that look like paintings, it is no wonder that it is a place that drew the great creators of art.

Found in Central and South America near mangroves, forests, moist lowlands, and open areas with tall trees, the scaly-breasted hummingbird is a delightful little bird with metallic bronze-green upper plumage.

Hummingbirds use their long, extendible, straw-like tongues to eat nectar while hovering with their tails pointing upward. They lick at the nectar up to 13 times per second. The scaly-breasted hummingbird is sometimes seen hanging on the flower as it feeds. Often, flowers that are red in color will have the highest sugar content.

Surrounded by green arches 3.1 miles (5 km) in length is a section of industrial railway in Klevan, Ukraine. The Tunnel of Love was created by a Polish engineer who fell in love with a Ukrainian girl in Klevan. This was a story of forbidden love because they belonged to different faiths. So the idea to create a track through the forest was so he could walk the track in secrecy at night in the most direct way to meet his forbidden love. Now, it is a popular tourist destination for couples to walk the track, keeping the spirit of love alive.