The History of Foot Binding in China 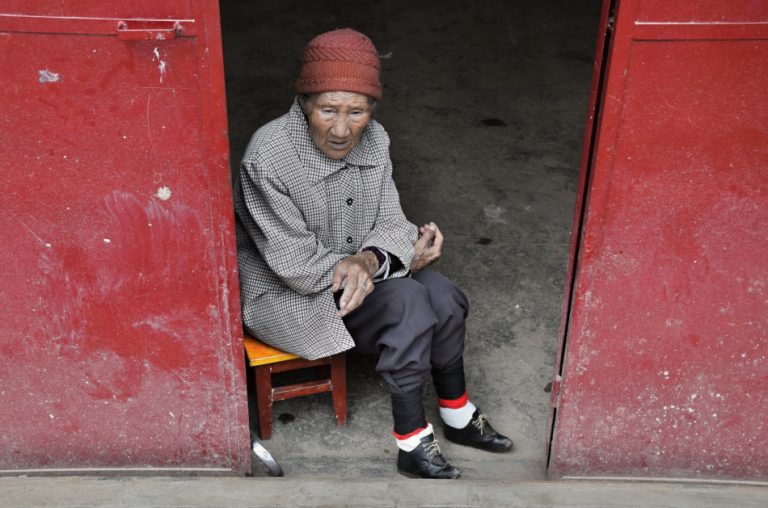 For nearly 1,000 years, a small foot in China was seen as the height of female refinement and women endured painful foot binding to achieve the feminine ideal. (Image: via Dreamstime.com © Laomacz)

Imagine massaging your 3-year-old daughter’s feet, then you grab her little toes and curl them under her foot, then you press with excessive force downward and squeeze them into the sole of the foot until her toes break. There is one country where this was practiced — China; this practice was called foot binding or lotus feet.

There are a few suggestions for the origin of foot binding, however, the general view is it originated from the time of Emperor Li Yu (Southern Tang of the Ten Kingdoms, just before the Song Dynasty).

Emperor Li Yu created a 6-foot-tall golden lotus decorated with precious stones and pearls, and asked his concubine Yao Niang to bind her feet in white silk into the shape of the crescent moon, and she performed a ballet-like dance on the points of her feet on the lotus.

In order to gain the emperor’s favor, the other concubines then attempted the practice; after all, Yao Niang was the emperor’s favorite concubine. So, foot binding started with the royal court and then spread throughout China, beginning in the south of the country and soon reaching the north.

In the 12th century, foot binding became much more widespread, and by the early Qing Dynasty (in the mid-17th century), every girl who wished to marry had her feet bound. It has been estimated that by the 19th century, 40-50 percent of all Chinese women may have had bound feet, and up to almost 100 percent among upper-class Han Chinese women.

A small foot in China was no different from a tiny waist in Victorian England, representing the height of female refinement. For marriageable daughters, foot size translated into its own form of currency and a means of achieving upward mobility. The most desirable bride possessed a three-inch foot, known as a “golden lotus.”

It was respectable to have four-inch feet — a silver lotus — but five inches or longer was dismissed as iron lotuses. The marriage prospects for such a girl were dim indeed.

What age were the girls?

The practice usually started before the arch of the foot had a chance to develop fully, typically between the ages of 4 and 9, although some were as young as 3. Four to six was the ideal age, as you could reason with the girls and help them deal with the pain.

Mothers, grandmothers, or older female relatives were usually the first to bind the girl’s feet. The process usually started during the winter months hoping the feet would be numb, and therefore the pain would not be as extreme.

How was it done?

Foot binding would normally occur in a ritualistic ceremony accompanied by other traditions intending to ward off bad luck.

First, each foot would be soaked in a warm mixture of herbs and animal blood; this was intended to soften the foot and aid the binding. Then, the toenails were cut back as far as possible to prevent ingrown nails and subsequent infections.

Then, all the toes, except the big toes, were broken and held tightly against the sole of the foot while the arch was strained as the foot was bent double until it was forcibly broken making a triangle shape.

Immediately after this agonizing procedure, the feet were bound in place using cotton or silk bandages, 3 meters long and 5 cm wide (10 ft by 2 in). The bandages were wound in a figure-eight movement, starting from the inside of the foot (the instep), then over the toes, under the foot, and around the heel, ensuring the freshly broken toes were pressing tightly into the sole of the foot.

On each passing, the bandage was tightened, pulling the ball of the foot and the heel together, causing the broken foot to fold at the arch. It was preferable to have someone other than the mother do it, as she might have been sympathetic to her daughter’s pain and less willing to keep the bindings tight.

The girl’s broken feet required a great deal of care and attention, and they would be unbound regularly. Each time the feet were unbound, they were washed, the toes carefully checked for injury, and the nails carefully and meticulously trimmed.

The broken feet were also kneaded to soften them and the soles of the girl’s feet were often beaten to make the joints and broken bones more flexible. Basically, the idea was to keep breaking the foot whenever it grew too large, a process that usually took between two and three years.

The bindings were loosened and re-tightened thereafter once each month until the girl reached her early teens (or even longer depending on the desired effect). Some adult women continued to wrap their deformed feet in bindings, wearing them in public or when bathing.

The aim of the long and excruciating process was to have feet no longer than 7.5-10 cm (3-4 inches), known as jinlian — “Golden Lotus” or “Lotus” feet, though few individuals actually achieved that goal. For most, the bound feet eventually became numb.

The smaller the feet, the more attractive they were, and it became a distinct mark of elegance, even the style of the way a woman with bound feet would walk became a necessity for all women; small, light steps were seen as elegant.

In the 19th century, toward the end of the Qing Dynasty, Western countries had effectively colonized China, with many Westerners moving to the country. This colonization coincided with the height of foot binding.

Around the same time, Chinese intellectuals who had studied abroad in Europe and in North America returned to China and indicated their support for abolishment. After the Qing Dynasty fell, foot binding became unfashionable.

Although critics campaigned against the practice in support of women, an unexpected side effect occurred; those who had their feet bound to become more desirable now found themselves being abandoned by their husbands, as it was no longer fashionable.

In the larger cities, people who found women with bound feet would cut off their bindings. This would humiliate the woman as she would have never shown her bare feet to anyone — not even her husband would have seen her feet.

By the time Mao Zedong took control of China in 1949, foot binding had mostly vanished, with the exception of a few remote, mountainous areas in the country. Despite the pains and consequences, foot-binding remained a common practice in China into the early 20th century.

By the 21st century, only a few elderly women remained with bound feet. In 1999, the last shoe factory making lotus shoes, the Zhiqiang Shoe Factory in Harbin, closed.