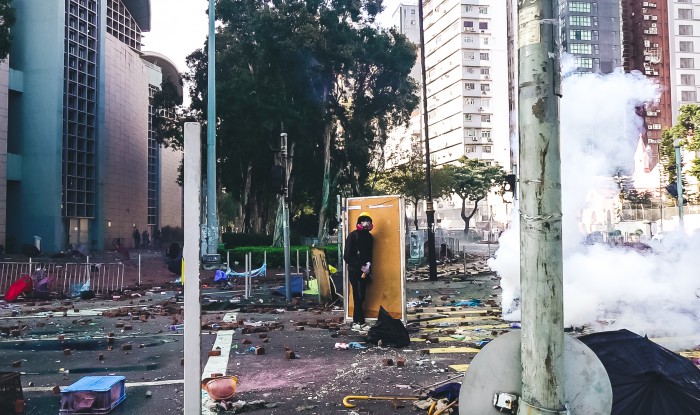 Hong Kong authorities are using the National Security Law to censor films in Hong Kong, including Inside the Red Brick Wall. Beijing is well-known for its censorship of the media and persons criticizing its policies and ideologies. Several high-profile brands and entities have faced backlashes when they tried to raise their voices against the ruling Chinese Communist Party (CCP) and its activities. Now, its influence on the adjacent island of Hong Kong is being felt.

In a dramatic step, the authorities in Hong Kong have given the Film Censorship Authority the power to ban movies that are deemed a threat to national security. The unprecedented move has resulted in widespread backlash from the film fraternity and creative circles who think it is an attempt to curb freedom of expression.

Ironically, Hong Kong is known for its vibrant cultural scene and several film festivals have been held on the island showcasing films made by eminent and award-winning filmmakers from various parts of the world.

The development is disturbing and it follows the deployment of the much-criticized national security law that regards any kind of anti-government protests as a criminal offense. The government said in a statement, “The film censorship regulatory framework is built on the premise of a balance between protection of individual rights and freedoms on the one hand, and the protection of legitimate societal interests on the other.”

In its first action, Hong Kong’s Film Censorship Authority pulled the award-winning documentary Inside the Red Brick Wall from two local exhibitors in March before it could be shown to a ticket-buying public.

The documentary feature, shot by a collective of anonymous filmmakers, chronicles the 13-day standoff between the police and protesters at the Polytechnic University in November 2019 that were part of city-wide protests sparked by a now-withdrawn extradition bill.

Director Wood Lin said that Inside the Red Brick Wall is an important work for the era and should be introduced to audiences worldwide. He described the film as documenting the Hong Kong people’s quest for freedom and said that it was made by a crew under strenuous circumstances.

Inside the Red Brick Wall was named best film by the Hong Kong Film Critics Society in January, but its first commercial screenings in Hong Kong in March were canceled. Pro-Beijing supporters and media suggested that the film may violate the city’s National Security Law, causing exhibitors Golden Scene Cinema and the Hong Kong Arts Centre to halt their plans to screen the film.

The film was given a category III, or 18+ rating, by Hong Kong’s Film Censorship Authority. Producer and Hong Kong distributor Ying e Chi explained that the rating only restricts the age of the audience and does not make the film illegal.

Hong Kong’s censors were known for their openness and flexibility and did not reflect the repressive censorship system of the Chinese National Film Bureau. But as Beijing continues to inject the National Security Law into Hong Kong’s mini-constitution, known as the Basic Law, in response to the city’s political turmoil of 2019 and 2020, censorship of films “committing acts or engaging in activities that endangered national security” is likely to continue.

Anders Hammer, who rose to fame after making the Oscar-nominated documentary Do Not Split in 2019, lashed out at the move by Hong Kong’s Film Censorship Authority by saying:

“This film censorship system shows how freedom of expression is disappearing from Hong Kong. In 2021, we have seen how the situation is deteriorating further where activists and pro-democracy politicians are put in prison, charged under the new draconian national security law. And unfortunately, it looks like the local government and Beijing only want to continue with this dissolution of basic democratic rights in Hong Kong.”

Still, all was not lost as Inside the Red Brick Wall, the film that was effectively banned in its hometown, was presented as the showpiece of the Museum of Modern Art (MOMA) Festival of International Nonfiction Film and Media in New York City in March and the Taiwan International Documentary Festival in April.