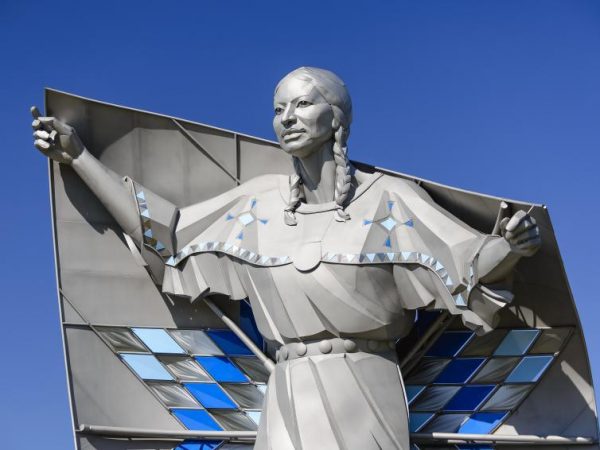 The woman wears a dress pattern inspired by a two-hide design of the 1850's Lakota and Dakota Nations and holds a star quilt, which has proven to be the most striking part of the entire sculpture. (Image: via ravelsouthdakota.com)

The Dignity statue, a magnificent sculpture that’s a beautiful tribute to the Native Nations of the Great Plains region, sits high above the Missouri River in South Dakota. The 50-foot-tall artwork — officially named Dignity of Earth and Sky, but often shortened to just the Dignity statue — is in honor of Native American women.

The Native American woman depicted in the Dignity statue is wearing a plains-style dress and receiving a star quilt. In highlighting this figure, the memorial recognizes the often-overlooked group of women of the Lakota and Dakota Nations.

The Dignity statute’s reflection of the Lakota and Dakota cultures

Artist Dale Claude Lamphere created the beloved monument. To perfect the woman’s portrait, he referred to three Native American models — ages 14, 29, and 55 — while studying the rich traditions of the Lakota and Dakota cultures. “My intent,” Lamphere explains, “is for the sculpture to stand as an enduring symbol of our shared belief that all here are sacred and in a sacred place.”

The woman wears a dress pattern inspired by a two-hide design of the 1850’s Lakota and Dakota Nations and holds a star quilt, which has proven to be the most striking part of the entire Dignity statue. The outstretched quilt — a symbol of respect and honor in Native American culture — features 128 stainless steel blue diamond shapes that flutter when the wind blows. It also appears differently throughout the day. When the sun is up, the pieces dazzle in the daylight. At night, they are illuminated by LED lights and have a dramatic yet tranquil appearance.

The Sioux is a confederacy of several tribes that speak three different dialects — the Lakota, Dakota, and Nakota. The Lakota, also called the Teton Sioux, are comprised of seven tribal bands and are the largest and most western of the three groups, occupying lands in both North and South Dakota. The Dakota, or Santee Sioux, live mostly in Minnesota and Nebraska, while the smallest of the three, the Nakota, primarily reside in South Dakota, North Dakota, and Montana. The Sioux Nation generally call themselves Lakota or Dakota, meaning “friends, allies, or to be friendly.”

A gift for the people of South Dakota

The statue was a US$1 million gift from Norm and Eunabel McKie of Rapid City to all the people of South Dakota. The couple announced the gift in 2014 to celebrate South Dakota’s 125th anniversary of statehood. “This gift will mean a lot to South Dakota,” said Gov. Dennis Daugaard. “In addition to being the state of Mount Rushmore and Crazy Horse, South Dakota will also be the state of the Dignity statue.”

If you’d like to visit the Dignity statue, it is located at the Chamberlain, South Dakota, rest area on Interstate 90 between Exits 263 and 265. It takes a few minutes to walk to the Dignity statue’s location, but the view and the statue are exceptional. Also, don’t miss the Atka Lakota Museum and Cultural Center on the south side of Interstate 90.