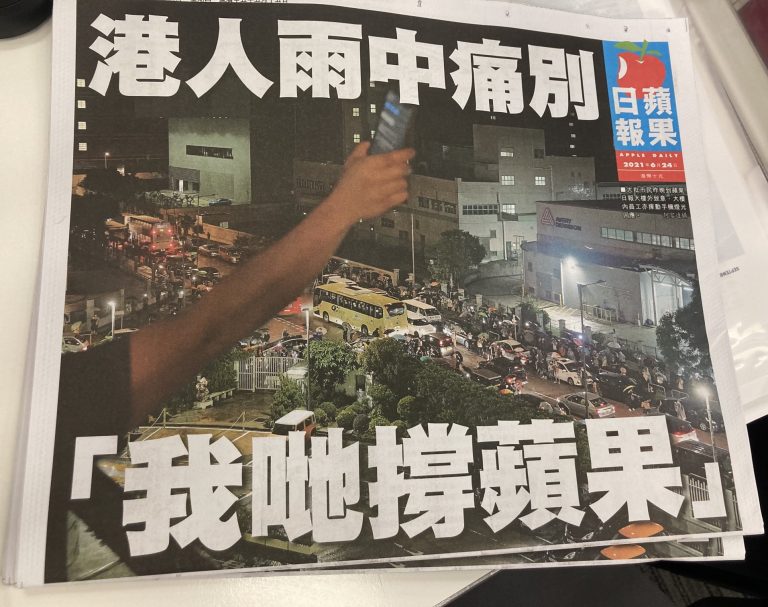 The final edition of the 'Apple Daily' on June 24, 2021 was a tribute to its readers with the headline: 'Hong Kongers Bid a Painful Farewell in the Rain.' (Image: via Twitter)

Hong Kong’s largest pro-democracy newspaper Apple Daily has announced its closure, which is seen as a blow to press freedom under the pressure of Beijing. The publication, which was a leading critic of the Hong Kong and Chinese leadership, decided to shut down after being accused of breaching the National Security Law, leading to a freeze on company assets.

The Apple Daily management said that “in view of staff members’ safety,” it had decided “to cease operation immediately after midnight,” making its June 24 publication the final printed edition.

The former managing editor of Apple Daily’s English edition and lead Chinese editorial writer Fung Wai-kong (who wrote under the pen name Lo Fung) was arrested at Hong Kong International Airport on June 27 as he prepared to leave for the UK. He is accused of conspiring to collude with foreign forces and is the seventh senior Apple Daily journalist to be arrested on national security charges in recent weeks.

The parent company of Apple Daily, Next Digital ceased operations on July 1 but has vowed to try to pay its employees, according to an internal memo. Its founder Jimmy Lai is presently serving a combined 20-month jail term for his role in organizing two pro-democracy rallies across the city in 2019. He also faces charges under the National Security Law that could result in a life sentence if found guilty.

A public outpouring of support for Apple Daily

As news of Apple Daily’s closing spread across Hong Kong, thousands rushed to snap up the final edition of the newspaper after a run of some 26 years. Overnight, hundreds braved heavy rain, gathering outside its offices where a million copies were being printed.

The final edition on June 24 was a tribute to its readers with the headline: “Hong Kongers Bid a Painful Farewell in the Rain.” However, all is not lost as a section of cyberactivists are devising ways to bypass the government crackdown.

Realizing that Beijing can deploy a firewall to Hong Kong, cyberactivists and IT professionals have started uploading Apple Daily articles on ARWeave, a decentralized file storage platform. ARWeave is similar to a BitTorrent in that it breaks down files into data bits and these are then distributed over a network of anonymous computers. So far, more than 4,000 articles from the former newspaper have been uploaded on ARWeave.

It’s not the first time Hong Kong residents are resorting to the web to upload and back up data. Earlier this year, they uploaded documentaries made by RTHK, a local broadcaster.

Is online media next?

The end of Apple Daily wasn’t a surprise. But that it came at such short notice, following dramatic raids, the arrest of senior journalists, and the freezing of its assets has already had a chilling effect on the rest of Hong Kong’s media.

Just hours before news of Fung’s arrest broke, Stand News, a nonprofit, independent online news outlet that has reported extensively on Hong Kong protest movements announced a slew of pre-emptive measures to reduce risk to its staff, authors, and supporters. Among the measures taken were the removal of all articles published by its regular contributors and columnists and other opinion articles published before May.

Other news outlets are being reshaped

Apple Daily’s demise and the wiping of the Stand News archives are the latest in a series of developments that have eroded Hong Kong’s press freedoms and undermined editorial independence at the city’s news outlets. These include the muzzling of Hong Kong’s public service broadcaster RTHK and personnel changes at pay-TV channels i-Cable and Now TV that have seen pro-government figures replace respected journalists.

In the wake of these developments, journalists in Hong Kong are running out of newsrooms where they can still practice relatively independent, critical journalism.