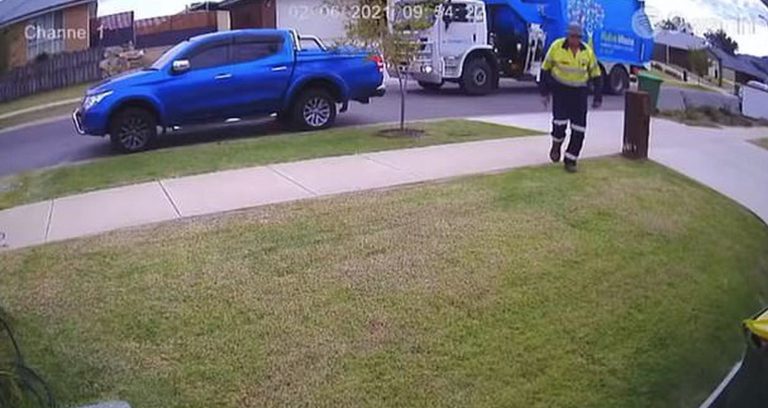 The local garbage collector went to the house, collected the bin, and emptied it for the homeowner. (Image: via Facebook)

COVID-19 has wreaked havoc on almost everyone’s life in some way or another. However, in this dire situation, we have seen more than one act of kindness that has helped to restore trust and belief in humanity. Here is one such instance that involved a garbage truck driver.

Mr. Taylor Ross Hampton is a resident of Baranduda, Australia, which is a small bedroom community of Wodonga. The incident took place at Mr. Hampton’s home and was recorded by his security camera.

In the recording, it was seen that he had forgotten to put his recycling bin outside for pick up. However, the local garbage collector went to the house of Mr. Hampton, collected the bin, and emptied it. It was found that the name of the garbage collector was Phil. Extremely happy and surprised by his act of kindness, Mr. Hampton wants to reward Phil with a six-pack of beer.

Generally, local garbage collectors don’t go to homes to check if garbage or recyclables are in need of collection. This truck driver was seen to go beyond his call of duty by helping a homeowner on his route.

When Mr. Hampton was contacted, he said that he was working from home and was on Zoom call. Though he saw that the truck pulled up, he couldn’t leave the call at that moment. He thought that his recycling bin would not be emptied that day as he realized he forgot to set it out. But when he went out to retrieve his garbage bin, he saw that the empty recycling bin was also at the curb.

Later, he examined the security camera footage and saw the whole picture. He saw that Phil stopped his truck, backed up, and brought the recycling bin from the house to the curb for disposal in his truck.

Mr. Hampton was so impressed and happy with the act that he called the Wodonga Council and Cleanaway to express his gratefulness for the act of kindness and great sense of duty of the garbage collector.

He also made the act of kindness viral by posting the video to his Facebook page, saying: “Shout out to this legend! Might be something small but it definitely didn’t go unnoticed.” It was from a Facebook friend that Mr. Hampton came to know that the driver’s name was Phil.

Mr. Hampton now plans to drop off a six-pack of beer to pass on to Phil as an expression of thanks.

“Phil probably never gave it a second thought,” Mr. Hampton said. “He just did it because he thought he should, but these are the people who we should give thanks and gratitude for because they go out of their way just for the sake of doing it, not for the love of the job.”

“It’s small but it’s important and made a big difference to my day.”