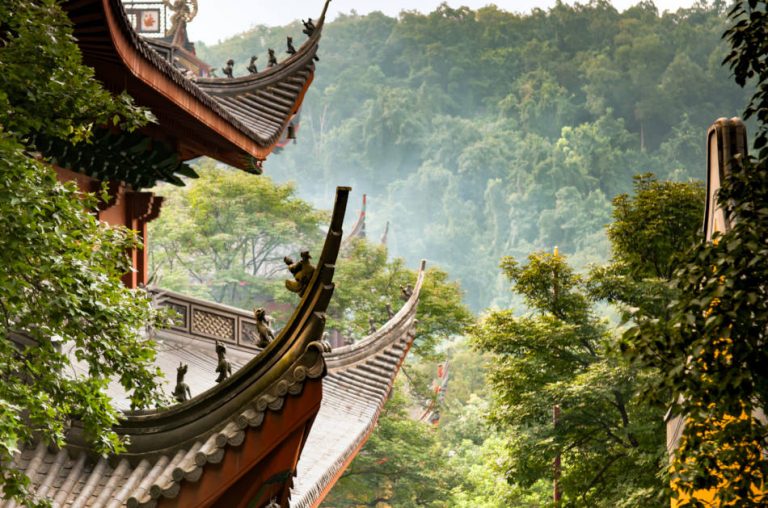 In the Ming Dynasty, Dongyue Temple, Yanzhou Prefecture, Shandong, was well-known for the manifestation of deities. (Image: Nuvisage via Dreasmtime)

There have been many historical records about using supernatural powers through the ages, such as bending a ladle handle with the mind, moving objects through telekinesis, and communicating with plants. However, these kinds of abilities are not available to everyone, and a practitioner with these kinds of powers cannot use them at will and can only use them when necessary. So then, when can such powers be used? We hope you can get the answer from the story of Monk Jigong’s supernatural powers below.

The historical narrative of Monk Jigong stated that Prime Minister Qin took advantage of his authority to tear down the Dabei Tower of Lingyin Temple. It was told that Qin wanted to obtain the materials for constructing the tower and use them to repair Getian Tower, which had burned down in his private garden.

Accordingly, the four emissaries, including Qin An, Qin Shun, Qin Zhi, and Qin Ming, carried the prime minister’s written order to the temple along with 10 attendants and at least 20 horsemen. Passing Qin Hefang and rushing to the Qiantang Gate outside, they dismounted from their horses after arriving at the gate of the Lingyin Temple.

Upon seeing the prime minister’s emissaries, the reception monk hurried out and greeted them. The chief executive monk, Guang Liang, ushered the four men into the temple.

When Qin An explained his intention, Guang Liang kept quiet in his heart. While continuously chanting the Buddha’s name in his mind, he said: “The construction of Dabei Tower is a monumental project that could not be accomplished with just the Lingyin Temple’s efforts alone. Many noble officials, elders, and devout men and women have contributed the finances to build it. At this point, the tower has only been partially built up and is not finished yet. If you demolish it now, then when will it be rebuilt again? I beg all of you to tell the prime minister something good for us.”

Qin An did not reply to his words. However, Qin Shun said: “The prime minister’s written order is not inferior to an imperial decree and must be obeyed!”

After Guang Liang asked the abbot, the abbot said: “Through begging alms, Jigong collected all the money needed for the construction of the tower. Therefore, you had better have them negotiate with him.” However, once the building of the monument commenced, Jigong left the temple and did not return. How could he be found?

While the two monks were talking, the four emissaries reached the construction site near the temple gate. First, they conveyed the prime minister’s written order to the workers. Then, they threatened them: “Anyone who dares to fight against the demolishing order will be sent to Qiantang County hall for immediate punishment.” Did all the artisans, including tilers, carpenters, painters, and plasterers, dare to violate the prime minister’s order? Immediately, hammers, picks, and shovels were raised against the monument and in the blink of an eye, it was completely demolished.

As Guang Liang was standing nearby sighing, he saw Jigong, who was slowly returning from Sudi, West Lake. Jigong had been visiting landlord Su and playing a game of chess, during which time he divined that the prime minister would send someone to pull down the monument. Thus he knew that it was the right time to go back to confront the four emissaries.

While singing, Jigong arrived at the temple gate where he met the emissaries. He said: “Please tell your master, the prime minister, whose rank is one of the top three positions in the court, that he should do good deeds and accumulate merits and virtue. But instead, he came to destroy the holy Buddha-land for no reason?”

It was impossible for the emissaries to return these words to their master. Qin An angrily said: “What an ignorant monk. I will hit you first!” He raised his hand and wanted to slap Jigong.

Jigong swiftly dodged aside and said: “You want to fight? Let us go outside.” At once, Qin An followed Jigong outside and bade his attendants: “Beat the monk!” So all of them rushed forward together, surrounding the monk, hitting him with their fists, pushing him to the ground, and giving him kicks and punches. Then, after nonstop groans, there came a yell: “Stop! It’s me!” However, those followers said: “We will beat you. It would be best if you did not die. How dare you provoke the almighty premier!”

While this was occurring, Qin Shun came from the other side and said: “Stop! There is something wrong with the voice. Let me check. Look! The monk is standing on the east side.” Turning around, everyone found that the monk was standing away from the melee and laughing. On looking down, they discovered that the person they beat was Qin An, and his body was covered with wounds.

Monk Jigong’s supernatural powers made the people incited by Qin An turn and beat Qin An himself, because Qin An did not respect the holy Buddha-land and wanted to demolish it. So he deserved the beating. Similarly, if one does not respect Buddhas, what kind of punishment will such a sinful person receive?