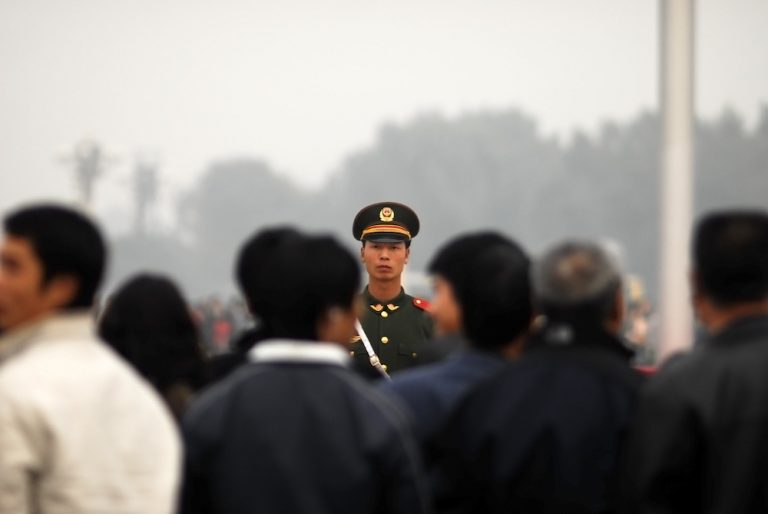 An undated photo of a Chinese police officer in Beijing’s Tiananmen Square. (Image: via Dariusz Kopestynski via Dreamstime)

Many aspects of traditional Chinese culture are treasured and admired around the world. Art. Cuisine. Philosophy. Architecture. Kung Fu. These are a few examples. Yet there’s no such worldwide esteem for the ruling Chinese Communist Party (CCP), no matter how the Party, and its massive propaganda machine, would like it to be otherwise.

Recently, the Chinese Communist Party marked, with much forced fanfare, its centenary on July 1. Probably not by coincidence, a day before the anniversary, the Pew Research Center published a report that found many people around the world view China’s rulers in a poor light. Given the communist regime’s totalitarian nature, it’s probably good to note that the report’s use of the term China is largely referring to the ruling Chinese Communist Party or its conduct.

The research by Pew found unfavorable views of modern China hover at near historic highs in most of the 17 advanced economies surveyed. The Pew report found that a “17-public median of 69 percent have an unfavorable opinion of China.”

Around three-quarters of those in Canada and the U.S. surveyed hold negative views of China, including nearly four-in-ten who have very unfavorable opinions, the report said.

“In Europe, a median of 66 percent have negative views of China, while 28 percent see China favorably,” it said. “Majorities in eight of the nine European countries surveyed have unfavorable views of China, ranging from 80 percent in Sweden to 57 percent in Spain. Only in Greece are attitudes positive toward China, with 52 percent favorable and 42 percent unfavorable.”

The Asia-Pacific region had a more negative view of modern China than Europe. The report said there was a median of 73 percent who see China in a negative light, but added that the highest variance in opinions exists in this region.

The report also looked into how people around the world agree that the Chinese Communist Party disregards the personal freedoms of China’s people.

“In each of the 17 advanced economies surveyed, a majority — and in many cases a large majority — agrees that the government of China does not respect the personal freedoms of its people,” the report said.

“In Sweden, South Korea, Australia, the Netherlands, the U.S., and Japan, at least nine-in-ten or more hold this opinion. Singapore stands out as the place where fewest hold this view — and even there, 60 percent say China does not respect the personal freedoms of its people.”

This sense that the communist regime does not respect human rights is at or near historic highs in most places, Pew found.

“[E]ven as majorities in all countries surveyed in 2018 already believed that China does not respect the personal freedoms of its people, this sense has nonetheless gone up sharply in Italy (+18 percentage points), South Korea (+12), Greece (+9), Canada (+8), Australia (+8) and the UK (+5),” the report said.

“Only in France has opinion shifted in the opposite direction, though 83 percent of French people still believe China does not respect the personal freedoms of its people.”

Pew said that opinions about the regime’s treatment of its people and views of China are closely related. “In publics where more people think China does not respect its citizenry, unfavorable views of the country are higher,” the report found.

“In the U.S., China’s treatment of its own people is a highly salient issue. In an open-ended question asked only in the U.S. about what people think about when they think about China, one-in-five mentioned issues related to human rights, including 9 percent who specifically mentioned how the Chinese people lack freedoms like those of religion, speech, and the right to assemble.”

Keeping to research only, the report does not venture greatly into why the communist regime has earned such a bad reputation, but most with some knowledge of modern China would agree there is a long list of issues. Since taking power in 1949, the Chinese Communist Party has caused manmade famines, waged violent political campaigns, and has more recently repressed Hong Kong. There’s been the regime’s diabolical treatment of minorities and people of faith, i.e., Uyghurs, Christians, Tibetans, and Falun Gong practitioners. There’s also been the Chinese Communist Party’s international belligerence, i.e., South China Sea, Taiwan, cyber espionage, and its handling of the COVID crisis — just some examples that have shown the world what the Party ultimately exemplifies.