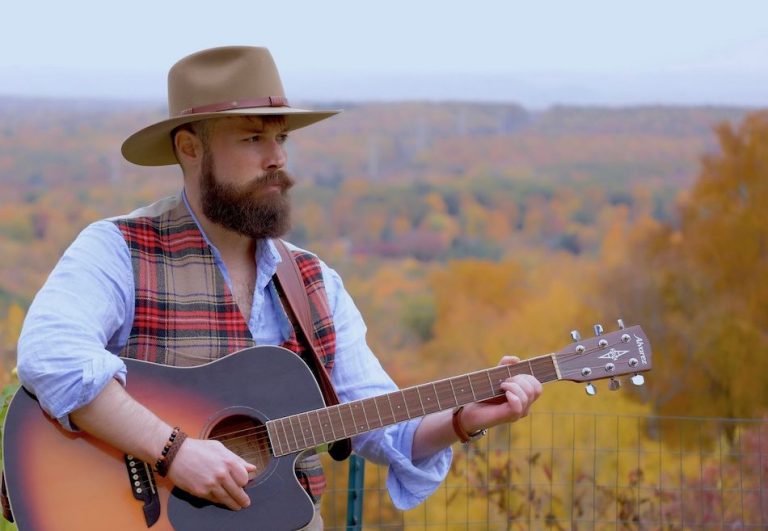 'My path ain't straight with twists and turns, Pain is good, makes me learn' — Lyric from 'Freed Man's Creed.' (Image: via Ying Shakespeare)

There is something hugely cinematic and energizing about this new release, Freed Man’s Creed, which follows his earlier song Purple Heart, another great tune with grand sounds that embraces patriotism and humanity.

Because of the song’s cinematic quality, countless Western films spring to mind. Our character in the song Freed Man’s Creed is on a mission and there is no time to waste.

The song opens with the lyrics: “There’s an outlaw in my own skin, ready to bleed for the Freed Man’s Creed,” by the gravelly, timeless voice of James H. White. The opening has a similar feel to someone who captures an audience around a campfire at the beginning of a captivating story.

Then, as we hit the second line of lyrics: “I was born to walk alone, like every man until I’m home,” I get the impression our storyteller has no problem going against the tide.

And then the rhythm kicks in. And does it ever. This is one of the highlights of the piece for me. The percussion is so rich and multilayered as it progresses throughout the piece, allowing moments of rest to breathe in the guitar and lyrics. It is so finely-crafted and balanced. Other instruments also build into the percussive landscape. It’s got that outlaw feel — stomps, claps, chains, and sounds that mimic the American landscape, such as the rattle of a rattlesnake.

At the heart of the song lays a message to Americans (and the world) about fighting the tyranny of communism. “The Red Brotherhood is a lie of good, We’re givin’ into greed, Given’ up our Creed!”

The backup vocals add a splash of gospel and one backup vocal, in particular, has a Native American war cry-style of sound that carries all the way over the final lyric: “We have sworn to protect our home, We the people, can not be torn.”

“Freed Man’s Creed” is anything but ordinary. It is a uniting song full of fireworks and drive that feels so alive in spirit and celebrates a wonderful thing to uphold — freedom.

Tell us about the story behind Freed Man’s Creed.

Freed Man’s Creed is a song about celebrating freedom.

But once your country has a Constitution with God-given universal rights, then you want to be a  “Patriot” and fight to protect Liberty.

Freed Man’s Creed also celebrates the strength of the independent Western spirit and living by your own code.

The word “home” throughout the song has several meanings: Home, as a literal place of family; being comfortable inside your skin; and home in Heaven.

The greatest threat to free societies is communism, which the song addresses as well, warning of the “blood red flag” and the “Red Brotherhood” infiltrating America and the free world.

What was the process?

I wrote the lyrics and core melody, and then worked with producer/songwriter Ricky Borgia in Ohio. We gave the core composition to producer David English. David reconstructed the song and added lots of unique outlaw country musical elements — like stomps, claps, chains, among other instruments — that you might hear in a Johnny Cash or Colter Wall song.

How would you describe the music that you typically create?

It’s outlaw country, folk-country, or broadly Americana. But after my first release, Purple Heart, I also released a synth-pop remix. I worked with JANKOVSKY, a producer in Estonia. We’re both very happy how it turned out, so we’re going to do a Freed Man’s Creed remix as well.

What is the best advice you’ve been given?

David English told me: “Your emotion is your superpower.” I hope he’s right, because I know I can’t compete on talent.

If you were to curate a mixed tape for our readers with 5 songs, what would they be?

Here are a few favorites:

Everybody Walkin’ This Land — Paul Cauthen

Sleeping on the Blacktop — Colter Wall

Who inspired you to make music?

I was working on a song with someone. It didn’t turn out how I wanted, so I thought I’d just give it a shot. I’m very much just starting out, so I’ve got a lot to learn.

If you could change anything about the industry, what would it be?

It would be great if there are more opportunities for independent musicians to create a full-time sustainable career.

Also, I like songs with deeper meanings or messages about divinity, universal values, or stories of forbearance and sacrifice, for example.

What’s next for you?

Listen to the song and watch the Album Art Video Clip:

Artists involved in making the song