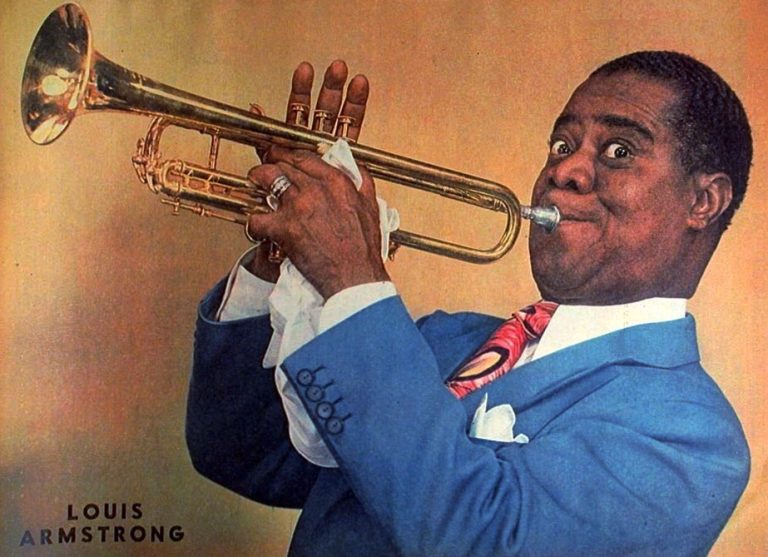 When previewing celebrities the word 'legendary' is often overused. When it comes to the leading significant figures of jazz and popular music you cannot miss the importance of the truly legendary Louis Armstrong. (Image: via Wikimedia Commons)

When previewing celebrities, the word “legendary” is often overused. When it comes to the leading significant figures of jazz and popular music, you cannot miss the importance of the truly legendary Louis Armstrong.

He was also known by many beloved nicknames, the prominent ones being “Pops,” “Satchmo,” “Satch,” “Louie,” and “Ambassador Satch” on account of his hugely popular overseas tours.

Louis Armstrong was born into a poor family on August 4, 1901. They lived for a time in an area of New Orleans, where it was so dangerous that it was called “The Battlefield.” William Armstrong, his father, worked as a day laborer. He abandoned his family soon after Louis was born and the children hardly got to see him.

It was obvious that making ends meet was going to be very hard for the family. Louis’s mother, Mayann, was just 16 years old when he was born. With each passing day, life became miserable for the young Armstrong family. Louis spent a part of his childhood in the care of his grandmother.

And then a miracle happened. Louis Armstrong found a second home with the Karnofskys. They were a Lithuanian-Jewish family and lived locally as well. They hired Louis to carry out some odd jobs for them and for their market trading stalls.

Seeing that Louis was a young boy without a father, this family treated Louis as their own child. They offered him food, shelter, and often a place to sleep. He also heard the sweet Jewish songs and lullabies that Mrs. Karnofsky would sing to her children.

In fact, it was this family who gave Louis a loan and advice for purchasing his first musical instrument, a cornet for $5, from a pawn shop. By living with the family, Louis developed a love for the matzah, spoke fluent Yiddish, and had a mezuzah. Most importantly, he wore a Star of David around his neck.

“On New Year’s Eve 1912, he was arrested and sent to the Colored Waif’s Home for Boys. There, under the tutelage of Peter Davis, he learned how to properly play the cornet, eventually becoming the leader of the Waif’s Home Brass Band. Released from the Waif’s Home in 1914, Armstrong set his sights on becoming a professional musician. Mentored by the city’s top cornetist, Joe “King” Oliver, Armstrong soon became one of the most in-demand cornetists in town, eventually working steadily on Mississippi riverboats.”

Gradually, Louis started playing the cornet and the trumpet, and he also learned to play and sing various Jewish and Russian songs. His musical talent started to be recognized and appreciated. When he became a professional composer and musician, he used many Jewish melodies in his compositions

“Armstrong continued touring the world and making records with songs like Blueberry Hill (1949), Mack the Knife (1955), and Hello, Dolly! (1964), the latter knocking the Beatles off the top of the pop charts at the height of Beatlemania.” He co-starred in movies alongside Hollywood legends like Bing Crosby, Frank Sinatra, and Barbara Streisand.

There are two stories as to who gave him the Star of David. In some places, it is said that it was given to him by the Karnofsky family and he wore it as a sign of his gratitude toward them.

In some other places, it is said that the Star of David was given to him by Joe Glaser as a sign of good luck. Joe Glaser was also a Jewish man who was his manager and who played a very significant role in his life.

Louis credited the Karnofsky family with teaching him “how to live — real life and determination.” Armstrong was a great Civil Rights pioneer for his race, breaking down numerous barriers as a young man — making friends with and for the rights of all races.

Louis Armstrong said it was in memory of the kindly Jewish family, the Karnofskys, that he wore the Star of David around his neck until his death. The legend passed away in his sleep on July 6, 1971, a few months after his final engagement at the Waldorf-Astoria in New York City.