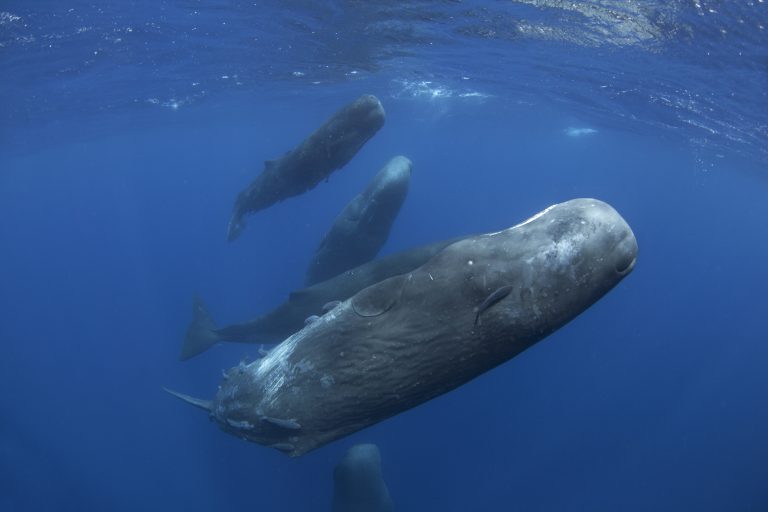 Imagine being a diver and coming across a group of sperm whales sleeping vertically, not swimming like dolphins and porpoises, but floating upright and motionless in the open sea. (Image: Martin Procházka via Dreamstimes)

Imagine being a diver and coming across a group of sperm whales sleeping vertically, not swimming like dolphins and porpoises, but floating upright and motionless in the open sea. If you ever witnessed such a scene, congrats, you have seen a very rare sight.

Back in 2008, a team of scientists from Scotland and Japan literally bumped into a group of sperm whales sleeping vertically close to the surface of the water. The mammals were so immersed in a state called “drift diving” that they didn’t even respond to the presence of the passing boat. By observing the whales, the researchers onboard found they spend just 7 percent of their day napping, for bursts of around 10 to 15 minutes each time.

Capturing images of whales can be especially challenging because the animals are so big that they are difficult to illuminate with strobe lights, which underwater photographers frequently use in dark ocean depths. And if a photographer isn’t in the right position to capture an elusive underwater moment, the subject may not stick around long enough to provide a second chance.

Another group of sperm whales sleeping vertically was captured by photographer Franco Banfi. Banfi was free diving — underwater diving without a breathing apparatus — in 2017 off the coast of Dominica, an island in the Caribbean Sea between Martinique and Guadalupe, when he spied six still and silent sperm whales drifting in their upright postures at a depth of around 65 feet.

Sperm whales are large ocean mammals, also known as cachalot, characterized by their narrow lower jaws and huge square heads. The sperm whale is the largest of the toothed whales and the largest toothed predator. Mature males average 52 feet in length, but some may reach 68 feet with the head representing up to one-third of the animal’s length. Plunging to 7,382 feet, it is the third deepest diving mammal. They also have the largest brain on Earth, more than five times heavier than a human’s. Sperm whales can live 70 years or more.

Sperm whales entered sleep by first descending head-down to a depth several times that of their bodies, then passively turning head-up and drifting closer to the surface. Sperm whales around the world practice this vertical sleeping posture — but infrequently, spending only about 7 percent of their time asleep, which is less than any other mammal spends asleep.

Scientists also believe they sleep with one eye open and one-half of their brain awake, not only to control their breathing, but also to ensure they can avoid predators, maintain social contact, or continue swimming. The phenomenon is called unihemispheric slow-wave sleep and has also been recorded in whales living in captivity.

A pod of sperm whales is observed sleeping vertically, floating in a state of suspended animation. This clip is from the nature series Big Blue:

The ability of different species of cetaceans to hold their breath varies between a few minutes and over an hour. Their sleeping habits are also non-standard.

Humpback whales, for example, have been found resting motionless on the surface of the water for about 30 minutes. They can’t stay like that for long though, because they lose too much body temperature when inactive. Electroencephalogram (EEG) readings on bottlenose dolphins have shown these mammals spend about one-third of their day asleep.

Researching a huge humpback or a sperm whale, in the same way, is an unlikely scenario. It would mean having to develop an EEG setup big enough (and a cooperative whale) to record the electrical activity of the brain. In the meantime, science will have to continue to rely on discoveries to better understand how whales sleep.