Jaw Clamp or Warped Vision: Is This the Sorry End of Science? 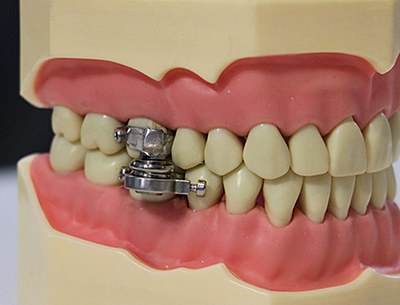 Medical professionals from the University of Otago, New Zealand, alongside scientists from Leeds, UK, have developed the DentalSlim Diet Control jaw clamp to tackle issues related to morbid obesity. (Image: University of Otega)

Just when you thought that you’ve seen it all and heard it all, along comes the DentalSlim Diet Control jaw clamp. This is a ferocious-looking, (and in my opinion hideous-looking) magnetic tool “bolted” to your teeth allowing them to open only 1/16 inch (2mm) wide to allow consumption of a liquid-only diet? Perhaps you’ve got your thoughts about this, seeing as it’s taking the world by storm right now.

Medical professionals from the University of Otago, New Zealand, alongside scientists from Leeds, UK, have developed the DentalSlim Diet Control jaw clamp to tackle issues related to morbid obesity. It’s designed as a weight-loss tool with magnets and locking bolts to prevent people from opening their mouths wide enough to consume solid foods.

Jaw clamp has been given the green light

The device has been given the green light to be fitted by dental professionals. I have struggled with weight issues my entire life, so my first thought when witnessing the picture of how one’s jaw would look if fitted with this device was that this is nothing short of a modern-day insult! What about the issues with talking or yawning or, heaven forbid, vomiting, or needing to scream.

The device was initially trialed by seven otherwise healthy, obese women from Dunedin, New Zealand, who were tested over two weeks. Fitted with the device, the women were given a low calorific and liquid-only diet. It has been reported that the group of women lost a combined amount of 14 Ibs (6.36Kg) during the trial period.

However, the women complained that the device was difficult to use and caused issues with their speech. Which is what an average person would expect to hear, right? In general, their overall consensus was that “life was less satisfying” while using DentalSlim Diet Control.

Studies have demonstrated a negative association between obesity and various mental health issues, such as anxiety and eating disorders. Fitting a device to clamp jaws may assist users with eating less solid food, but it could also fuel problems such as anxiety and depression.

Has the dental profession really thought this jaw clamp through? For a determined foodie or binge eater, the jaw clamp could well end up being counterproductive and downright more hazardous to health.

Most food can be liquidized, so what’s to stop someone that is morbidly overweight and in poor health from liquidizing and sloshing down banana-caramel-cream-chocolate-moose smoothies all day long? And what effect does that magnetic field have on the brain and glands for example? Or if another metal object stuck to the clamp?

This device would work, if at all, on someone only under strict medical supervision, in my humble opinion.

Professor Paul Brunton from the University of Otago has called the device “non-invasive.” It is in your mouth, so how can that compute? I wonder if his stance would remain the same if he were fitted with one himself?

People have used social media platforms, such as Twitter, to slam the device. People have compared the usage of DentalSlim Diet Control to “medieval torture” and I can’t say that I’d disagree.

Instead of physically clamping down on obesity, we need to be more open to listening to why so many people have weight issues. Mentally, we need to challenge the core issues.

For me, my weight issues have always been more profound than just picking up a bar of chocolate and eating it. Diets for me (and most others) are more of a mental challenge than a physical one.

Physically, the weight shows, but the mental challenges are hidden. What isn’t hidden and far too much on show is a wired and clamped jaw. This device could prove to be far more damaging to the mental health of its users, but does that matter, as long as they physically look “better”?

The backlash has led the University of Otago to clarify that the device isn’t intended for “long-term use.”

Regardless, the long-standing effects that users could feel may potentially be devastating. So I hope that the only thing we clamp down on is the fight not to use the DentalSlim Diet Control jaw clamp. Speaking as someone that has been around the block battling weight issues, only in a clinical or supervised setting may this device offer some advantages.