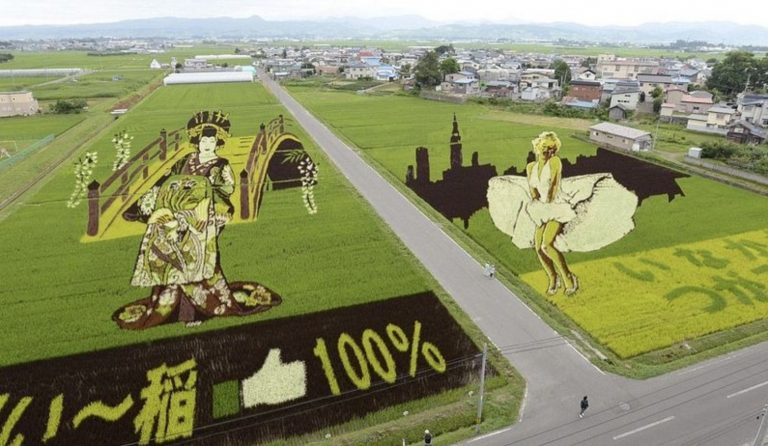 Rice paddy art, or Tanbo Art, is the creation of pictures and letters made by planting different color types of rice. (Image: Inakadate Village Planning and Tourism Division)

Japan is known for its prowess in technology and its amazing cuisine, but few are aware of its amazing rice paddy art. Rice is among the most widely harvested crops in Japan and a group of Japanese farmers has turned rice harvesting into a visually enticing form called rice paddy art. Rice paddy art, or Tanbo Art, is the creation of pictures and letters made by planting different colored types of rice.

Using a whole paddy field as a canvas, planting different varieties of rice that boast all sorts of colors, from green to red, and having them grow into large artworks of anime characters or sceneries — that’s Japan’s rice paddy art of July and August.

It all began in a village called Inakadate. Inakadate, located in the middle of Aomori Prefecture, was the first place to create rice paddy art and currently, there are two locations in the village dedicated to that purpose. It originally began as a way of promoting the local Tsugaru Otome rice brand. It started in 1993 when the staff at the village office came up with the idea that it would be interesting not only to experience rice cultivation, such as rice planting and rice harvesting, but also to create pictures with three types of rice of different colors.

The design changes every year, with the local art teacher lending a hand. It is drawn in perspective so that the picture is not distorted when viewed from an observation deck. The village council organizes a meeting to finalize the theme for the year. The officials make a drawing on a computer and the art teacher makes a detailed drawing.

Once a design has been completed, the varieties of rice to be planted are selected and a blueprint is made. The positions that will serve as marks for planting the seedlings are determined and then marked by stakes following the completed blueprint.

Once that is done, the planting of the seedlings begins. Anyone can participate in harvesting the rice if they make a reservation in advance. The rice-planting event is held every year from early to mid-May and the harvesting of it takes place from early to mid-September. Once the rice plants have matured, the rice paddy art is completed. What is amazing is that all of this work is done manually by the villagers.

The designs are different each year. In the first few years, simple geometric representations were planted based on Mount Iwaki and The Great Wave off Kanagawa. Later, the village adopted more complex and enticing themes. Thus far, they have made designs based on films, historical figures, and local heritage and folklore.

The themes for 2020 were the Mona Lisa, a motif based on the masterpiece by Italy’s leading artist Leonardo da Vinci and Japanese Western artist Kiyoki Kuroda, and the anime Evangelion, the popularity of which has caused a social phenomenon in Japan.

In Inakadate, the rice field art concept proved to be a runaway success with tourists visiting from around the world. The rice paddy art draws approximately 150,000 visitors a year and the number is growing.

The amazing rice mural art has made the once-unknown Japanese village famous. The recent rice field art boom has created various platforms for exchange between tourists and locals, leading to people having a better understanding of agriculture and heightened awareness of things such as food safety. On top of that, admission fees, on-site food stalls, and utilizing multiple venues create a ripple effect that revitalizes the entire area. With international visitors from countries such as China and France, Japan’s rice field art is sure to spread even further!