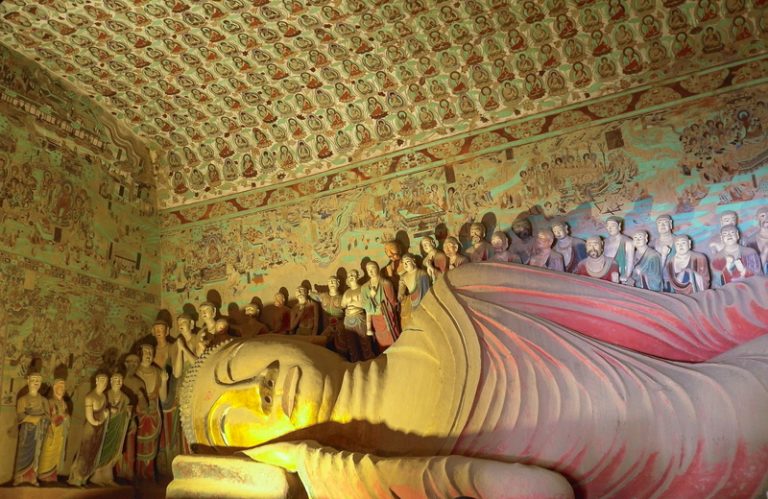 During the Tang Dynasty, yellow became the prominent color used in the Mogao Caves at Dunhuang. (Image: Hoang Bao Nguyen via Dreamstime)

These examples show that the color yellow in Chinese culture has been prominent since ancient times beginning from the reign of the Yellow Emperor in 2697 B.C. The Yellow Emperor is said to be one of the ancestors of the Yan Huang, the name of an ethnic group of ancient China that inhabited the Yellow River basin area. The Yan Huang were also said to be the origin of the Chinese people and the initiators of Chinese culture.

The Emperor of the Han Dynasty (206 B.C-A.D. 220) believed that after the Han inherited the system of the Qin Dynasty (221-206 B.C), this was due to the merits of the earth element. According to the theory of the five elements, earth surpasses water, and since yellow symbolized the earth element, yellow became an integral part of the Chinese culture.

At that time, the court’s prime minister, as the assistant to the Emperor, was granted the “Golden Seal decorated with a Purple Silk Ribbon,” which was a symbol of the highest power below the Emperor and above all others. This established yellow and purple as supreme colors in traditional Chinese culture.

During the Tang Dynasty, yellow was used in all aspects of Chinese traditional culture and arts. In the Mogao Caves at Dunhuang, there are more than 10,000 precious murals, covering ​​more than 50,000 square meters. The colors of the murals differ depending on the period they were created. For example, during the Northern Wei period, red-brown accompanied by blue and black were the prominent colors. During the Tang Dynasty, yellow started to be the most used color in the murals and the resulting pictures were alluring and bright.

It was in the period of Emperor Gaozong of Tang that reddish-yellow could only be used by the emperor because it is the color of the sun. From then on, reddish-yellow was used exclusively for garments worn by emperors.

During the Ming and Qing dynasties when Beijing became the capital, yellow became the exclusive color of the imperial family; ordinary people were not allowed to wear yellow. The “Ninth Five-Year Lord” of the Qing Dynasty wore a yellow robe, his vehicle was called the yellow cart, his path was called the yellow road, yellow flags were used during his travels, and his official seals were wrapped with yellow material. Yellow became the symbol of power.

Furthermore, yellow was the most commonly used color in Buddhist schools. The Buddha’s figure was called a “golden body,” and temples that used the color yellow were called “golden temples.” Robes worn by monks were yellow, and the Buddha figurines were gilded to show their nobility. The Chinese people believe that the color yellow comes from the skies and has been considered to be the color of Heaven since ancient times. According to traditional Chinese culture, Heaven represented the highest level of the Gods. The reason why the emperor was able to rule his empire on earth was due to the honor granted by Heaven.