Top 10 Most Beautiful Forests in China 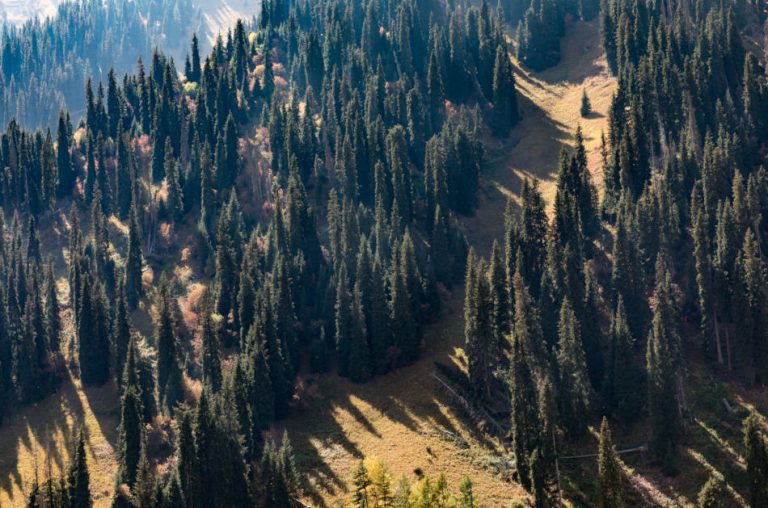 The Xueling spruce trees can be found in the Tianshan Mountains of West China. (Image: Ninara via Flickr)

If you’re into nature, you’ll love looking at these gorgeous photos of the 10 most beautiful forests in China, and you may even be inspired to visit some of them.

Being such an enormous country, China has a variety of climates and geology, which means that there are many different types of forests found from north to south, and east to west.

Each forest has its own kinds of majestic trees, wonderful waterways, and unique animals.

Enjoy this virtual trip to the loveliest ones.

10 most beautiful forests in China

The Xueling spruce trees are found in the Tianshan Mountains of West China, growing at an altitude of 4,900 to 9,200 feet above sea level. These magnificent trees are known as the “King of Xinjiang Spruces,” and tend to grow on the snowy peaks.

This forest has existed for 40 million years, making the species a living fossil, and the oldest known tree species in Xinjiang. It also thrives in the deserts of Central Asia.

Located on Liantian Mountain near Yibin City, the Shunan Bamboo Sea spreads over more than 70,000 hectares, and it is full of rivers, lakes, and waterfalls. There are 58 types of bamboo here, forming China’s oldest and largest bamboo forest.

It was here that the famous bamboo scene from the movie Crouching Tiger, Hidden Dragon was filmed. It’s a hiker’s paradise, and there are gorgeous views from the many hills, as well as ancient temples and shrines.

The Korean pine mixed forest in Changbai Mountain Nature Reserve is known as “China’s Green Treasure House,” and is situated in the northeast near the border with North Korea.

Apart from Korean Pines, there are many broadleaf and coniferous species, as well as smaller plants like amur grapes and schisandra berries. The volcanic landscape is rather mysterious with unusual peaks, stunning waterfalls and lakes, and rare flora and fauna.

The Jianfengling Tropical Rainforest is on Hainan Island in the South China Sea.

It is China’s largest and most intact tropical rainforest with eight types of vegetation spreading from the seashore to the highest peak, and living fossil species that are over 200 million years old.

With its abundance of azaleas, the Baima Snow Mountain Forest is located in the cold northwest, and is home to the rare Yunnan gold monkey.

These gorgeous flowers bloom every year in the high mountains between 8,500 and nearly 14,000 feet. They form huge colorful clusters across the peaks that look like a “sea of flowers” after the ice and snow have melted, as spring turns into summer.

Extending over 4,600 hectares, the Bomi Gangxiang Spruce Forest surrounds the lower reaches of the Yarlung Tsangpo River, mostly between about 8,500 and 16,500 feet above sea level.

The climate here is mild and humid due to the moist warm air that rises from the Indian Ocean. Some of these huge old trees are up to 90 yards tall. There is an interesting variety of animals, including leopards, black bears, monkeys, and parrots.

Covering 241,000 hectares, the Xishuangbanna National Nature Reserve has one of the world’s most well-preserved tropical rainforests, and it is located south of the Hengduan Mountains.

In 1993, UNESCO accepted it as a member of the International Man and Biosphere Reserve Network. It features broad basins of evergreen forest surrounded by hills and crisscrossed by rivers.

Situated next to the desert highway, this roadside forest stretches for 2,700 hectares in the Tarim River Valley and features the oldest poplar trees in the world.

This species has existed for over 60 million years. It appeared during the Tertiary age when the Qinghai-Tibet plateau emerged.

The Libo or Maolan Karst Forest is located in Libo County, and it is a primeval subtropical forest amid conical limestone hills with plenty of water and underground caves.

With over 20,000 hectares of lush vegetation, this forest is known as the “emerald on Earth’s belt,” particularly compared with other karst areas in the same latitude which are mostly stone deserts.

Think forest, rivers, and snow, and you’ll get the feel for this Xing’an Larch Forest in the Daxinanling Mountains. With four very distinct seasons, this area along the northern frontier is particularly beautiful in spring and summer.

It is part of the circum-arctic coniferous forest that spreads through this part of China with many arctic species like the elk, the snow hare, cowberries, and crowberries.