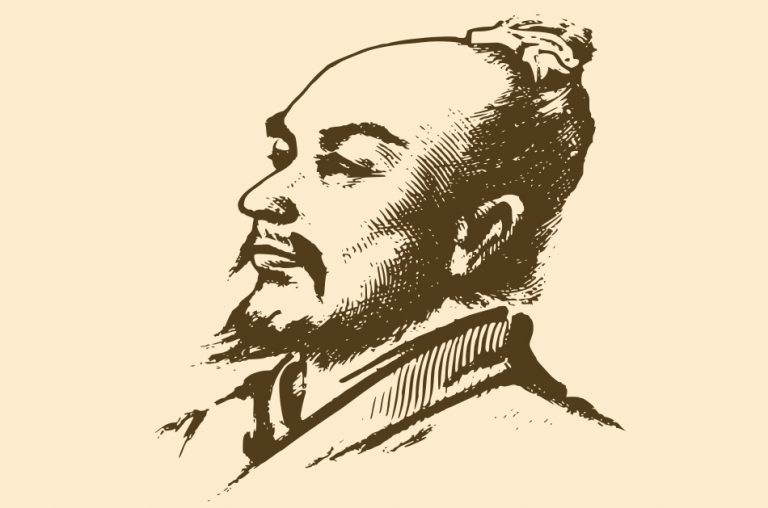 He was well-versed in the fields of mechanics and gears, and applied his extensive knowledge in several of his ancient Chinese inventions, such as the world’s first water-powered armillary sphere to represent astronomical observations, and the world’s first seismometer, which discerned the cardinal direction of an earthquake 310 miles (500 km) away.

He also improved previous Chinese calculations related to the formula for pi. In addition, he was renowned for his fu(rhapsody) and shi poetry, which were highly regarded by later Chinese writers.

Born in a town north of modern Nanyang City, Henan Province, Zhang Heng came from a distinguished, but not very affluent family. His grandfather, who served as governor of a commandery, died when Zhang was 10 years old, leaving him in the care of his mother and grandmother. Zhang left home when he was 17 to pursue his studies in the ancient capitals of Chang’an and Luoyang.

In A.D. 112, Zhang was promoted to Chief Astronomer for the Han court under Emperor An, serving two terms of office. He was charged with recording heavenly observations and portents, preparing the calendar, and reporting which days were auspicious.

With his Response [to Criticism] of My Idleness, Zhang was an early writer and proponent of the Chinese literary genre shelun, or hypothetical discourse. Authors of this genre create a written dialogue between themselves and an imaginary person (or a real person of their entourage or association).

Achievements in science and technology

For centuries, the Chinese approximated pi as 3; Liu Xin (A.D. 23) made the first known Chinese attempt at a more accurate calculation of 3.154. Around A.D. 130, Zhang Heng compared the celestial circle to the diameter of the Earth, proportioning the former as 736 and the latter as 232, thus calculating pi as 3.1724.

Zhang cataloged 2,500 stars, which he placed in a “brightly shining” category (the Chinese estimated the total to be 14,000), and he recognized 124 constellations. In comparison, this star catalog featured many more stars than the 850 documented by the Greek astronomer Hipparchus (c 190-120 B.C.) in his catalog, and more than Ptolemy (A.D. 83-161), who cataloged over 1,000.

Zhang Heng is the first person known to have applied hydraulic motive power (i.e. by employing a waterwheel and clepsydra, or water clock) to rotate an armillary sphere — an astronomical instrument representing the celestial sphere.

The sphere itself was rotated by a turning waterwheel, which in turn was powered by the constant pressure from the head of water in the water clock tank. His water-powered armillary influenced the design of later Chinese water clocks and led to the discovery of the escapement mechanism by the 8th century.

In A.D. 132, Zhang Heng presented to the Han court what many historians consider to be a seismometer. His bronze, urn-shaped device was called houfeng didong yi (an instrument for measuring the seasonal winds and the movements of the Earth), and had a swinging pendulum inside. As such, he was thus able to detect the direction of an earthquake hundreds of miles away.

This was essential for the Han authorities in sending quick aid and relief to regions devastated by this natural disaster. Later Chinese were able to reinvent Zhang’s seismometer.

Map-making in China had existed since at least the 4th century B.C., with the Qin State maps found in Gansu in 1986 that accurately pinpointed the winding courses of rivers and streams. Moreover, the Book of Later Han hints that Zhang was the first to make a mathematical grid reference on ancient China maps, stating that he “cast a network of coordinates about Heaven and Earth, and reckoned on the basis of it.”

Odometer and the south-pointing chariot

The south-pointing chariot, an ancient Chinese 2-wheeled vehicle with a figure that always pointed south and acted as a compass, was another mechanical device credited to Zhang Heng.

In honor of Zhang’s achievements in science and technology, his friend Cui Ziyu (Cui Yuan) wrote a memorial inscription on his burial stele, which has been preserved. “[Zhang Heng’s] mathematical computations exhausted [the riddles of] the heavens and the Earth…”

Several things have been named after Zhang in modern times, including the lunar crater Chang Heng, the 1802 Zhang Heng asteroid, and the mineral Zhanghengite in recognition of the greatness of Zhang’s ancient Chinese inventions.