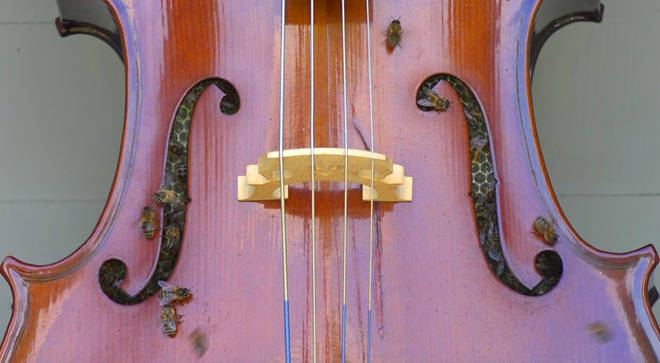 Bees set up their hive in a cello in a West Bridgford garden in the UK. (Image: via BBC)

It is quite commonplace to come across beehives in gardens and forests. However, it’s quite unusual to find a beehive in a cello. In an urban landscape, beehives may form in uninhabited buildings, especially under overhangs and in attics. However, rarely do bees construct hives in musical instruments! In a unique development, a university professor set out a cello belonging to his wife so that a swarm of bees could construct their beehive in a cello.

Bees are pollinators, meaning they help plants live and reproduce by transferring pollen between various species of flowering plants. They carry pollen on their legs and bodies from one flower to another, helping to create what’s known as “genetic variety” by distributing different genes throughout many plants and flowers.

Dr. Martin Bencsik is from Nottingham Trent University in the UK. His spouse is a professional cellist and he used a reclaimed instrument for studying vibrations and sounds generated by pollinating insects. Dr. Bencsik recorded the bee sounds for a musical soundscape. With this score, he aimed to make people aware of the diminishing population of pollinating insects.

A video of Dr. Bencsik’s cello in his garden:

In an interview given to the BBC, Dr. Bencsik said: “Bees need a cavity. We have run out of enough hollow trees in this country for them to make a good living, and it feels like a sacrifice to give honey bees such a beautiful, splendid object for them to develop.” The cello was kept in the garden of the professor in West Bridgford.

He added: “When we put them in the cello, they all crawl up to the very top and they start building their structure, the honeycomb, from the top and they make their way down. Within a few weeks, the entire cello was full of the honeycomb.”

For someone who used to dislike bees in his childhood, it is ironic that Dr. Bencsik used his wife’s cello for a hive. His father used to be a beekeeper and he hated getting stung by the bees as a child, thus he preferred to observe the 20,000 swarming insects from a distance. The cello that was kept in his garden was later carefully moved to Holme Pierrepont Hall at Nottingham Trent University

The cello-turned beehive can now be seen by visitors. The installation is part of a 4-year project at Nottingham Trent University, called “B-Good.” The project is meant to gain an understanding of bee behavior and to encourage sustainable bee-keeping. Dr. Martin Bencsik looks after the hive, which has access to the out of doors. The bees don’t fly far from the hive and prefer staying within a 3-mile radius.

The beehive in a cello has attracted many visitors

While the beehive in a cello has drawn the interest of visitors, not many are aware of what inspired Dr. Bencsik to come up with the idea. The idea developed from an association with an artist named Wolfgang Buttress. The latter developed a famous multi-sensory sculpture located at Kew Royal Botanic Gardens in London called The Hive.

The Hive is made up of aluminum rods and bars and resembles a huge honeycomb. It is a 56-foot high structure weighing approximately 44 tons. Inside the structure, there are about 1,000 LED lights that illuminate in sync with an amplified buzz of nearby beehives. That buzz mingles with a soundscape by using violins, cellos, and other musical instruments.

Mr. Buttress made The Hive with a team of landscape architects, musicians, and Dr. Bencsik. He and Dr. Bencsik devised ways to use accelerometers to transmit vibrational messages of honeybees to the sculpture. The sculpture was unveiled at the 2015 World Expo in Italy and later located at the Kew Royal Botanic Gardens.