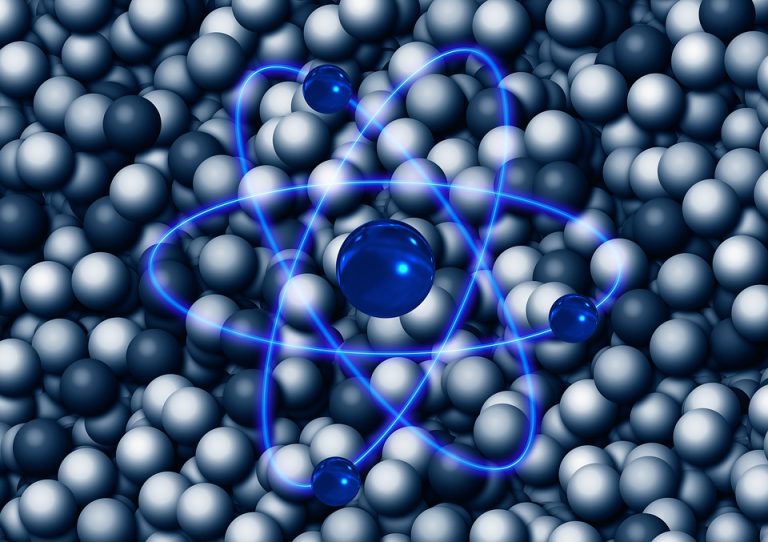 Radioactive molecules are sensitive to subtle nuclear phenomena and might help physicists probe the violation of the most fundamental symmetries of nature. (Image: geralt via Pixabay)

Why is there so little antimatter in the universe? Imagine a dust particle in a storm cloud, and you can get an idea of a neutron’s insignificance compared to the magnitude of the molecule it inhabits. But just as a dust mote might affect a cloud’s track, a neutron can influence the energy of its molecule despite being less than one-millionth its size. And now physicists at MIT and elsewhere have successfully measured a neutron’s tiny effect in a radioactive molecule.

The team has developed a new technique to produce and study short-lived radioactive molecules with neutron numbers they can precisely control. They hand-picked several isotopes of the same molecule, each with one more neutron than the next. When they measured each molecule’s energy, they were able to detect small, nearly imperceptible changes of the nuclear size, due to the effect of a single neutron.

The fact that they were able to see such small nuclear effects suggests that scientists now have a chance to search such radioactive molecules for even subtler effects, caused by dark matter, for example, or by the effects of new sources of matter-antimatter symmetry violations related to some of the current mysteries of the universe. Ronald Fernando Garcia Ruiz, assistant professor of physics at MIT, said:

“If the laws of physics are symmetrical as we think they are, then the Big Bang should have created matter and antimatter in the same amount. The fact that most of what we see is matter, and there is only about one part per billon of antimatter, means there is a violation of the most fundamental symmetries of physics, in a way that we can’t explain with all that we know.

“Now we have a chance to measure these symmetry violations, using these heavy radioactive molecules, which have extreme sensitivity to nuclear phenomena that we cannot see in other molecules in nature. That could provide answers to one of the main mysteries of how the universe was created.”

Ruiz and his colleagues have published their results in Physical Review Letters.

Most atoms in nature host a symmetrical, spherical nucleus, with neutrons and protons evenly distributed throughout. But in certain radioactive elements like radium, atomic nuclei are weirdly pear-shaped, with an uneven distribution of neutrons and protons within. Physicists hypothesize that this shape distortion can enhance the violation of symmetries that gave origin to the matter in the universe. Study lead author Silviu-Marian Udrescu, a graduate student in MIT’s Department of Physics, said:

“Radioactive nuclei could allow us to easily see these symmetry-violating effects. The disadvantage is, they’re very unstable and live for a very short amount of time, so we need sensitive methods to produce and detect them, fast.”

Rather than attempt to pin down radioactive nuclei on their own, the team placed them in a molecule that further amplifies the sensitivity to symmetry violations. Radioactive molecules consist of at least one radioactive atom bound to one or more other atoms. Each atom is surrounded by a cloud of electrons that together generate an extremely high electric field in the molecule that physicists believe could amplify subtle nuclear effects, such as effects of symmetry violation.

However, aside from certain astrophysical processes, such as merging neutron stars and stellar explosions, the radioactive molecules of interest do not exist in nature and therefore must be created artificially. Garcia Ruiz and his colleagues have been refining techniques to create radioactive molecules in the lab and precisely study their properties. Last year, they reported on a method to produce molecules of radium monofluoride, or RaF, a radioactive molecule that contains one unstable radium atom and a fluoride atom.

In their new study, the team used similar techniques to produce RaF isotopes, or versions of the radioactive molecule with varying numbers of neutrons. As they did in their previous experiment, the researchers utilized the Isotope mass Separator On-Line, or ISOLDE, facility at CERN, in Geneva, Switzerland, to produce small quantities of RaF isotopes. The facility houses a low-energy proton beam, which the team directed toward a target — a half-dollar-sized disc of uranium-carbide, onto which they also injected a carbon fluoride gas.

The ensuing chemical reactions produced a zoo of molecules, including RaF, which the team separated using a precise system of lasers, electromagnetic fields, and ion traps. The researchers measured each molecule’s mass to estimate the number of neutrons in a molecule’s radium nucleus. They then sorted the molecules by isotopes, according to their neutron numbers.

In the end, they sorted out bunches of five different isotopes of RaF, each bearing more neutrons than the next. With a separate system of lasers, the team measured the quantum levels of each molecule. Udrescu, who is a graduate student of MIT’s Laboratory for Nuclear Science, explained:

“Imagine a molecule vibrating like two balls on a spring, with a certain amount of energy. If you change the number of neutrons in one of these balls, the amount of energy could change. But one neutron is 10 million times smaller than a molecule, and with our current precision we didn’t expect that changing one would create an energy difference, but it did. And we were able to clearly see this effect.”

Udrescu compares the sensitivity of the measurements to being able to see how Mount Everest, placed on the surface of the Sun, could, however minutely, change the Sun’s radius. By comparison, seeing certain effects of symmetry violation would be like seeing how the width of a single human hair would alter the Sun’s radius.

The results demonstrate that radioactive molecules such as RaF are ultrasensitive to nuclear effects and that their sensitivity may likely reveal more subtle, never-before-seen effects, such as tiny symmetry-violating nuclear properties that could help to explain the universe’s matter-antimatter asymmetry. Udrescu said:

“These very heavy radioactive molecules are special and have sensitivity to nuclear phenomena that we cannot see in other molecules in nature. This shows that, when we start to search for symmetry-violating effects, we have a high chance of seeing them in these molecules.”