A Comic Book Café in Russia Is an Inspired Treat 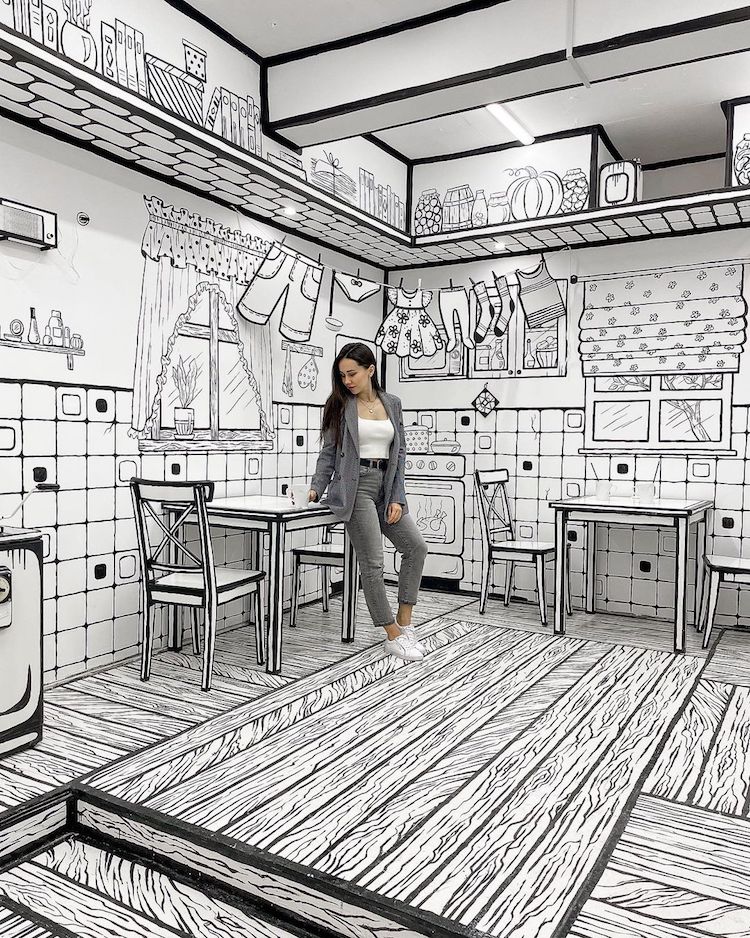 The interior of Café Bw was designed to look like a two-dimensional cartoon world. (Image: via Café Bw)

There are many historic and enticing places to explore in Russia, but cartoon and comic book lovers should not miss exploring a comic book café. The comic book café, formally called Café Bw, has become an Internet sensation after its images were uploaded on social media platforms like Instagram. The comic book café has locations in Saint Petersburg and Moscow.

The unique comic book-inspired decor is a hit with the locals and it is expected that the comic book café will become a tourist hotspot in the near future.

As you step inside the cafe, you see black and white wall-to-wall paintings simulating a comic book environment. Black and white walls, curtains, floors, and furniture, everything feels like 2D without a sense of depth. The visual impact is really powerful while confusing at the same time. In a way, anyone who enters the coffee shop is trapped between the real world and cartoons.

As this video shows, when you walk inside, you might think at first that you’ve stepped into a comic book or your favorite cartoon show.

Solbon Namsaraev, who is the owner and creator of the café, said: “The idea came up to create a place that would be interesting mainly due to its interior (of course, with a good coffee). The renovation took just over a month, and around 100 kg [about 220 pounds] of paint was used up.” The paintings are done entirely in shades of black and white and were designed by an artist named Anfisa Toshina.

Entering the comic book café is like entering a fantasy realm

The interior design of the café is reminiscent of the 1980s animated music video Take on Me, by A-Ha. The illustration theme is enticing and it makes you feel as if you are transported to a fantasy realm. It redefines the concept of “flat design” with a retro twist. The black and white painted curtains, floor, tables, and walls gel seamlessly to erase the depth factor.

The design has clicked with customers, says the owner. He added: “Since then, our customers have been delighted! People deliberately come to us to take unusual pictures. Our employees are also delighted with the work and some even waited months for vacancies to open.” The café has a website and it is also on Instagram.

While Café Bw is drawing attention from the locals and Internet users for its unique décor style, that is not the only good thing about it. In the café, you get the chance to gorge on some quality snacks, desserts, and plenty of beverages. You may order fresh ground-roasted coffee and pair it up with some yummy muffins, cakes, or croissants.

Namsaraev said in an interview that he decided to launch a café in 2019 with the intent of creating an interesting place with good coffee. He was inspired by other cafés with similar designs (such as Café Yeonnam-dong 239-20 in Seoul, South Korea). He did some research before zeroing in on the interior design of the café.

Renovating the café took some time but the effort and expenditure were worth it. Since the comic book café opened, he said that the customers have been “delighted,” as have the employees, some of whom waited for months for a vacancy so they could come and work there.

The Moscow branch of the comic book café is open from Sunday through Thursday while the Saint Petersburg branch stays open daily. Reservations are typically not required, but the management recommends them for weekends and holidays. Those who want to ensure they get a table can book here.