Vietnam’s Efforts to Save Pangolins, the World’s Most Trafficked Animal 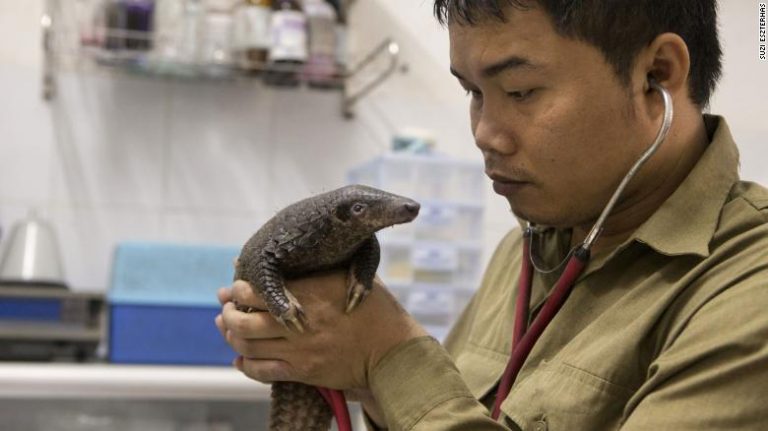 Thai Van Nguyen has spent a large part of his life trying to save pangolins and he has recently received recognition for his efforts. (Image: via Save Vietnam’s Wildlife)

While much is said and written about the need to protect species such as tigers, rhinos, whales, and marine turtles, rare mammals such as pangolins do not get much attention. Yet, pangolins happen to be one of the most trafficked animal species despite having been around for some 80 million years!

These pre-historic, solitary, nocturnal mammals are easily recognized by their full armor of scales. A startled pangolin will cover its head with its front legs, exposing its scales to any potential predator. If touched or grabbed it will roll up completely into a ball, while the sharp scales on the tail can be used to lash out. They also play a key role in the ecosystem as their burrows serve as shelters for creatures like mongooses and bats.

Also called scaly anteaters because of their preferred diet, pangolins are increasingly victims of illegal wildlife crimes — mainly in Asia and in growing amounts in Africa — for their meat and scales.

Thai Van Nguyen has spent a large part of his life trying to save pangolins and he has recently received recognition for his efforts. The conservationist has been rewarded with the coveted Goldman Environmental Prize.

Thai Van Nguyen founded and serves as director of the NGO Save Vietnam’s Wildlife. To date, he and his group have saved approximately 1,540 pangolins. He also played a key role in forming the first anti-poaching unit of Vietnam. The unit has arrested 558 poachers and significantly reduced poaching and animal trafficking. His efforts also convinced the Vietnamese government to remove pangolins from its approved traditional medicine list.

Nguyen says: “The pangolin is the only scaly mammal in the world. Losing the pangolin means losing a part of the ecosystem, making it unbalanced.”

The “Green Nobel,” or Goldman Environmental Prize, is given to six pioneering environmentalists every year who play major roles in protecting the natural environment. Thai Van Nguyen was somewhat amazed at the news of the coveted award being given to him. He became only the 2nd person in Vietnam to be conferred with this prestigious award. Green Innovation and Development Center director Nguy Thi Khanh received the award in 2018. The recipients receive a US$200,000 cash prize, along with a bronze sculpture.

Pangolins are killed for their scales and meat

The high demand for pangolin scales, used in traditional medicines, and meat has pushed the species to the brink of extinction. According to the non-profit Wildlife Justice Commission, their scales can sell for up to US$740 per kilogram in some Asian countries.  Eight pangolin species have been put on the International Union for Conservation of Nature Red List.

The pangolins are naturally shy and evade humans, in general. The animals are hard to breed in captivity and rampant poaching has wiped out a major part of the pangolin population. The eight species of pangolin, which are found mainly in Africa and Asia, have been put under critically endangered to vulnerable categories. In 2019, an estimated 195,000 pangolins were trafficked worldwide for their scales, according to the World Wildlife Fund (WWF).

Apart from the coveted prize, Nguyen has received universal acclaim from wildlife and nature conservation groups for his tireless work. Dr. Dan Challender, a pangolin expert and Research Fellow at Oxford University’s Martin Programme on Wildlife Trade, hailed his efforts.

Nguyen feels optimistic about the future, saying: “I see a change in young people; they are much more active. We hope people will learn about the pangolin; how lovely they are, what challenges they face. One person or one organization cannot change everything, cannot save the pangolin, but if everyone takes action together, we can save the species from extinction.”