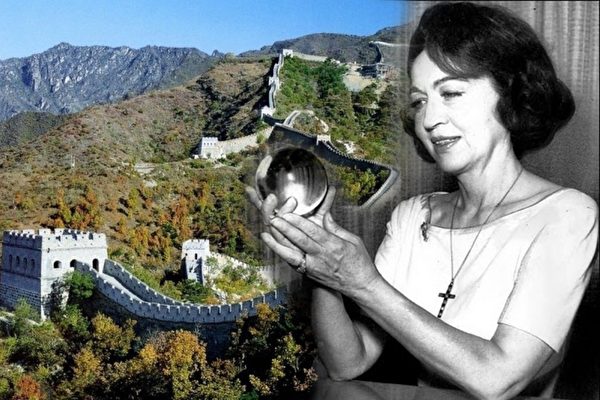 Before her death in 1997, Jeane Dixon predicted that the hope of humankind lay in the East — China. (Image: via The Epoch Times)

Jeane Dixon, a renowned American psychic, predicted the death of President Franklin Roosevelt, the defeat of Prime Minister Winston Churchill in an election, and the assassination of President John F. Kennedy. Dixon also predicted that China would be taken over by communists. Before she passed away in 1997, she predicted that the hope of humankind lay in the East.

Jeane Dixon spent her life in divination, wrote seven books, including an autobiography, and predicted major events, of which some were accurate and others were not; however, most of her predictions regarding United States presidents and China affairs proved to be correct.

She was not interested in politics and world affairs, but repeatedly predicted the change of state leaders, including a prediction made in 1945 about British Prime Minister Winston Churchill.

It was reported that when Jeane Dixon was introduced to Churchill, she was inspired and said to him: “It is best not to have an early election; otherwise, you will be defeated.”

She said: “Temporary defeat does not matter. After a few years, the British power will be in your hands once again.” In June 1945, Churchill lost the election, but 6 years later, he made a comeback as Prime Minister.

Jeane Dixon predicted that the Communist Party would take over China

At the first meeting with U.S. President Franklin D. Roosevelt, Jeane Dixon was requested to make a prediction about the international situation.

Roosevelt then said: “Communist China? This is impossible! We absolutely have no conflict with China. Our coalition with the Soviet Union is to maintain our status in the world.”

Jeane Dixon, with deep concentration, said: “I can see the Communist Party seizing the power in China, the present regime will be exiled to a leafy island (Taiwan), and communist China will become our second greatest diplomatic threat.”

A moment before Dixon’s death, she predicted that the hope of mankind will be in the East: China

In 1997, Jeane Dixon was in a critical condition, but she left behind her last words: “The United States will decline and the hope for mankind will be in the East. China will replace the United States as the superpower of the world.”

Translated by Chua BC and edited by Angela.