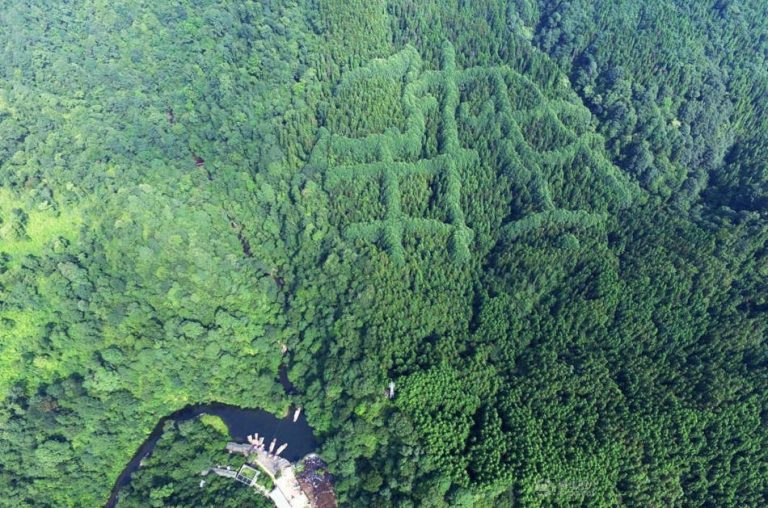 Mysterious patterns resembling Chinese characters can be seen over the north of the forest on top of a mountain in Matou Village, Sichun Province, China. (Image via 腾讯图片 / Tencent Pictures)

Ten years ago, local shutterbug member Gao Shuxian of Chengdu, Sichuan Province, climbed up a newly built signal tower on the top of a mountain in Matou Village. He noticed a strange view of a mysterious pattern over the north of the forest, but couldn’t figure out what it was.

Earlier in July, Gao realized he could probably see the patterns using satellite maps online. There were three giant patterns formed by the trees that look like the Chinese character “犇,” which is the character for “run fast.” It is created by three “bull” characters “牛” side by side. But there is more, and something that looks like people hand in hand.

The mysterious pattern spreads from northwest to southeast on the mountain, covering more than 1,200 acres.

The mysterious pattern clearly stands out from other trees

The trees in the pattern clearly stand out from the surrounding trees, with a distinctive color. The whole pattern is about 0.6 miles long and 0.3 miles wide.

The middle part is the largest, and most complicated. It is formed by multiple crosses. The southeast part is the smallest, about 300 feet long and wide.

It is not clear what the characters are at present, as there are other lines showing that aren’t included in the “run fast” character. No one has stepped forward to explain it either. It remains unknown whether the huge pattern is a natural formation, man-planted, or related to antiquity.

Gao also found out that the mysterious pattern is located at the latitude of 30 degrees, where many unsolved mysteries of nature seem to occur.