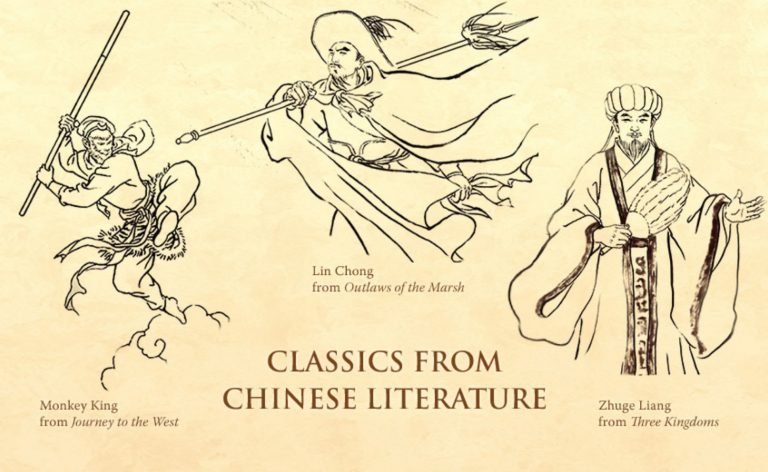 Chinese literature contains four masterpieces known as the Four Great Classic Novels (四大名著). 'Journey to the West,' 'Outlaws of the Marsh,' 'Romance of the Three Kingdoms,' and 'Dream of the Red Chamber' were written during the Ming and Qing dynasties. (Image: via shenyunperformingarts.org)

There are four classic novels of Chinese literature. Known collectively as the Four Great Classical Novels (四大名著 sì dà míng zhù), the influence of these four stories has spawned countless plays, movies, and legends, and permeated the culture in so many ways.

To better understand Chinese civilization, a good grasp of the stories in these novels is essential. All of the novels are based on historical events or take place during periods of China’s dynastic history. All have the philosophical, spiritual, and religious underpinnings characteristic of Chinese civilization.

The 4 classic novels of Chinese literature

1. ‘Romance of the Three Kingdoms’

Romance of the Three Kingdoms (三國演義 or 三国演义 Sān Guó Yǎn Yì), was written by Luo Guanzhong (羅貫中 Luó Quàn Zhōng). The story takes place during the fall of the Han Dynasty (206 B.C.-A.D. 220) when heroes arose to take control of the fate of the empire.

The historical ending of the Han Dynasty and transition into the Three Kingdoms period is illustrated with such forceful suspense and epic heroism that you will not easily want to put down this hefty 100-chapter novel.

The author drew on the tales of this turbulent period with sophisticated narratives of loyalty and treachery, triumph and defeat. The story has come to epitomize all that was the best and worst of life in China.

The Water Margin (水滸傳 or 水浒传 Shuǐ Hǔ Zhuàn), also known as Outlaws of the Marsh, was written in the 14th century by Shi Nai’an (施耐庵 Shī Nài Ān). It is a loose account of the exploits of righteous fugitives living during the Song Dynasty.

The story explores how fate brought them together, and the moral challenges that confront bandits with values. The story of these 108 men and women is enhanced by their striking characterizations. The way the author fleshes in the personalities of these multi-dimensional and extremely complex characters while they struggle with right and wrong is unmatched.

Journey to the West (西遊記 or 西游记 Xī Yóu Jì) was written by Wu Cheng’en (吳承恩 Wú Chéng’ Ēn) in the 16th century. It is a mythological novel that is based on the true journey taken by a monk during the Tang Dynasty to retrieve Buddhist scriptures from India and bring them back to China. But this is no ordinary journey.

Along the way, he is joined by an invincible monkey king, a lovably naive pig-man, a marsh-dwelling sand monster, and a dragon-horse. The story of how these five memorable creatures manage to complete an impossible journey has led to one of the most beloved classic novels of Chinese literature.

Dream of the Red Chamber (紅樓夢 or 红楼梦 Hóng Lóu Mèng), also known as The Story of the Stone, was written by Cao Xueqin (曹雪芹 Cáo Xuě Qín) in the middle of the 18th century. It is a masterpiece of realism.

The story explores the romances, fates, and fortunes of dynastic life in painstaking detail. Currently, there are entire fields of study focused on this book. No other book describes so vividly the daily way of life of people at various levels of society during ancient times.

What has led to the enduring love for these four great classic novels of Chinese literature throughout the ages? And why are these stories still used as the basis of countless other works of art and cultural phenomena? It is because they embody the Chinese way of thought throughout history.

They act as a source of cultural transmission for a Chinese outlook on life. They also provide concrete illustrations of the Chinese moral system. The books contain characters who think and act with Buddhist, Daoist, and Confucian principles to solve their dilemmas. These abstract ethical-moral systems are given concrete expression in many cultural forms.

So these four great classic novels of Chinese literature have delivered one such great expression.