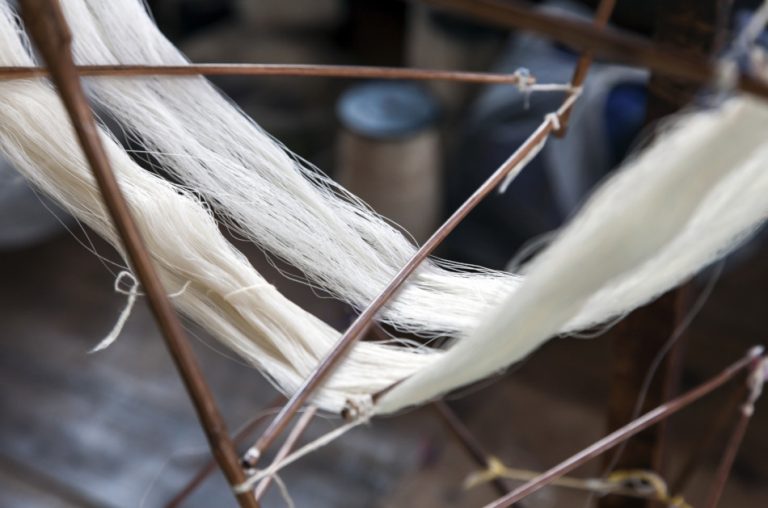 Among ancient China’s greatest inventions, silk weaving would have to be near the top of the list. (Image: via Dreamstime.com © Erinpackardphotography)

Among ancient China’s greatest inventions, silk weaving would have to be near the top of the list. Silk comes from a natural protein fiber that is composed mainly of fibroin produced by the Bombyx mori caterpillar, which spins a cocoon. The silk threads are taken from silkworm cocoons that have been boiled and silk weaving turns the protein fiber into textiles.

The best type of silk is obtained from the cocoons of larval silkworms. The stages of a silkworm’s development include egg, caterpillar, cocoon, and then moth. Who invented silk weaving? Legend says it was Lei Zu, the wife of Emperor Huang Di, the Yellow Emperor, some 4,000 years ago!

The legend says that Lei Zu discovered silkworms while having midday tea. A cocoon fell into her tea and the heat unwrapped the silk until it stretched across the entire garden. When the silk ran out, Lei Zu found that a larval silkworm was the source of the silk. She found also that silkworms ate mulberry leaves and spun cocoons.

So Lei Zu asked the Yellow Emperor to give her a grove of mulberry trees where she could domesticate the silkworms. Also, Lei Zu is attributed with inventing the silk reel, which joins fine filaments into a thread strong enough for weaving. She is also credited with inventing the first silk weaving loom.

No matter how accurate these legends are, it’s a fact that China was the first civilization to use silk! And so Lei Zu is popular in China, having been given the title of Can Nai Nai (蚕奶奶 Silkworm Mother), and she is credited with one of ancient China’s greatest inventions.

The shimmering appearance of silk is due to the triangular prism-like structure of the silk fiber, which allows silk cloth to refract light at different angles, thus producing different colors. The silk threads also can be dyed into many beautiful colors. They are used to make scarves, shirts, skirts, pajamas, and many other items of clothing.

Today, Chinese silk is mainly made in Suzhou 苏州, Jiangsu Province, and Hangzhou 杭州, Zhejiang Province. It’s sad to see that with human society’s declined moral values, the fruit of invention very often isn’t enjoyed by the hardworking people themselves.