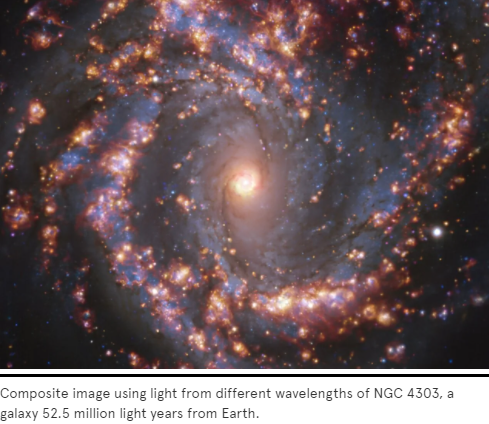 Using the most advanced telescopes on Earth and in orbit, scientists like Dr. Rebecca McElroy have gained unprecedented access to nearby galaxies, investigating how clouds of cold gas coalesce into hot balls of nuclear fusion giving birth to stars. (Image: ESO via PHANGS)

Using the most advanced telescopes on Earth and in orbit, scientists like Dr. Rebecca McElroy have gained unprecedented access to nearby galaxies, investigating how clouds of cold gas coalesce into hot balls of nuclear fusion giving birth to stars and stunning galactic fireworks. Breathtaking images of galaxies close to the Milky Way have been released by an international team of astronomers exploring the mystery of galaxy formation.

The amazing images, observed using telescopes operated by the European Southern Observatory in Chile’s Atacama Desert, show different components of the galaxies in distinct colors, allowing astronomers to pinpoint the locations of young stars and the gas they warm up around them. These stellar nurseries hold the secrets of how clouds of cold gas ignite to become stars.

To non-astronomers, the galaxies look like captured images of a beautiful fireworks display. Dr. Rebecca McElroy from the Sydney Institute for Astronomy at the University of Sydney is part of the international research team, she said:

“By combining observations from some of the world’s most powerful telescopes, we can examine the galactic regions where star formation is happening, compared to where it is expected to happen. This will give us a chance to better understand what triggers, boosts or holds back the birth of new stars.”

Astronomers know that stars are born in clouds of gas, but what sets off their formation — and what role galaxies play in this — remains a mystery. To better understand this process, more than 90 scientists from 30 institutions around the world are observing nearby galaxies using powerful ground and space-based telescopes. The work is part of the PHANGS (Physics at High Angular Resolution in Nearby GalaxieS) survey, which includes ESO’s Very Large Telescope (VLT) and the Atacama Large Millimeter/submillimeter Array (ALMA).

ALMA combines radio wavelength signals from 66 dish-shaped antennas, while the VLT consists of four large 8-meter telescopes and four smaller telescopes that can be used separately or combined into a single larger instrument. A high-tech instrument attached to the Very Large Telescope called the Multi Unit Spectroscopic Explorer, or MUSE, was used for the recent observations.

MUSE collects spectra — the “bar codes” of light that astronomers scan to unveil the properties and nature of cosmic objects — at every single location within its field of view, providing much richer information than traditional instruments. For the PHANGS project, MUSE observed 30,000 clouds of warm gas and collected about 15 million spectra of different galactic regions. Dr. Brent Groves, a PHANGS team member from the University of Western Australia node of the International Centre for Radio Astronomy Research (ICRAR), said:

“MUSE has given us an unprecedented view of what’s going on inside galaxies.”

The ALMA observations allowed astronomers to map about 100,000 cold-gas regions across 90 nearby galaxies, producing an unprecedentedly sharp atlas of stellar nurseries in the close Universe. They include galaxies such as Messier 100, about 55 million light-years from Earth, considered nearby in galactic terms, Dr. Groves said:

“By combining these observations with those from ALMA, we’re able to see newborn stars while they’re still surrounded by the blanket of gas they’ve formed from. The resulting images are absolutely stunning – they allow us a spectacularly colourful insight into the stellar nurseries of our neighbouring galaxies.”

In addition to ALMA and MUSE, the PHANGS project features observations from NASA’s Hubble Space Telescope. The various observatories were selected to allow the team to scan our galactic neighbors at different wavelengths (visible, near-infrared, and sub-millimeter), with each wavelength range unveiling the distinct processes that occur across the observed galaxies.

The work carried out by the PHANGS project will be further developed by upcoming telescopes and instruments, such as NASA’s James Webb Space Telescope. The data obtained will lay further groundwork for observations with ESO’s future Extremely Large Telescope (ELT), which will start operating later this decade. This telescope will enable an even more detailed look at the structures of stellar nurseries.

Provided by: The University of Sydney [Note: Materials may be edited for content and length.]