Activity on Largest Comet Ever Found 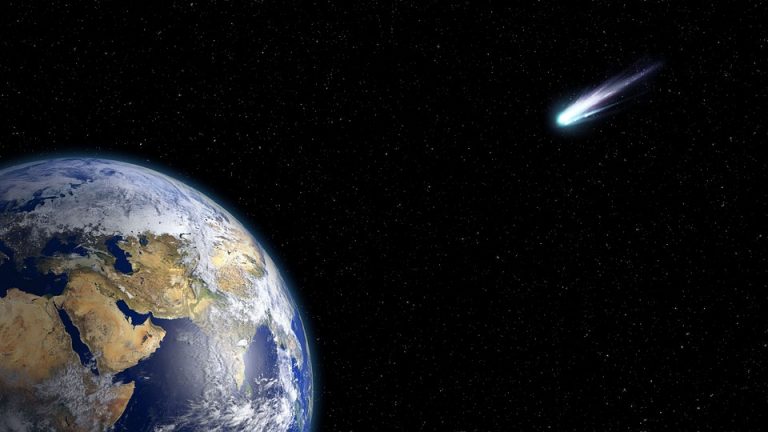 A newly discovered visitor to the outer edges of our Solar System has been shown to be the largest known comet ever, thanks to the rapid response telescopes of Las Cumbres Observatory. (Image: urikyo33 via Pixabay)

A newly discovered visitor to the outer edges of our Solar System has been shown to be the largest comet ever, thanks to the rapid response telescopes of Las Cumbres Observatory. The object, which is named Comet C/2014 UN271 Bernardinelli-Bernstein after its two discoverers, was first announced on Saturday, June 19, 2021.

C/2014 UN271 was found by reprocessing four years of data from the Dark Energy Survey, which was carried out using the 4-m Blanco telescope at Cerro Tololo Inter-American Observatory in Chile between 2013 and 2019. At the time of the announcement, there was no indication that this was an active world. Anticipation was immediately high among astronomers. C/2014 UN271 was inbound from the cold outer reaches of the Solar System, so rapid imaging was needed to find out: when would the big new-found world start to show a comet’s tail?

“Since the new object was far in the south and quite faint, we knew there wouldn’t be many other telescopes that could observe it. Fortunately LCO has a network of robotic telescopes across the world, particularly in the Southern Hemisphere, and we were able to quickly get images from the LCO telescopes in South Africa.”

The images from one of LCO’s 1-meter telescopes hosted at the South African Astronomical Observatory came in around 9 p.m. PDT on Monday night June 22. Astronomers in New Zealand who are members of the LCO Outbursting Objects Key (LOOK) Project were the first to notice the new comet. Dr. Michele Bannister at New Zealand’s University of Canterbury said:

“Since we’re a team based all around the world, it just happened that it was my afternoon, while the other folks were asleep. The first image had the comet obscured by a satellite streak and my heart sank. But then the others were clear enough and gosh: there it was, definitely a beautiful little fuzzy dot, not at all crisp like its neighbouring stars!”

Analysis of the LCO images showed a fuzzy coma around the object, indicating that it was active and was indeed a comet, even though it is still out at a remarkable distance of more than 1,800,000,000 miles, more than double Saturn’s distance from the Sun. The comet is estimated to be over 100 km in diameter, which is more than three times the size of the next biggest comet nucleus we know, Comet Hale-Bopp, which was discovered in 1995.

This comet is not expected to become naked-eye bright: it will remain a telescopic object because its closest distance to the Sun will still be beyond Saturn. Since Comet C/2014 UN271 was discovered so far out, astronomers will have over a decade to study it. It will reach its closest approach to the Sun in January of 2031. A recent article in The New York Times about the comet details its predicted travel.

Thus, Tim Lister and the other astronomers of the LOOK Project will have plenty of time to use the telescopes of Las Cumbres Observatory to study C/2014 UN271. The LOOK Project is continuing to observe the behavior of a large number of comets and how their activity evolves as they come closer to the Sun. Scientists are also using the rapid response capability of LCO to get observations very quickly when a comet goes into an outburst. Tim Lister explained:

“There are now a large number of surveys, such as the Zwicky Transient Facility and the upcoming Vera C. Rubin Observatory, that are monitoring parts of the sky every night. These surveys can provide alerts if one of the comets changes brightness suddenly and then we can trigger the robotic telescopes of LCO to get us more detailed data and a longer look at the changing comet while the survey moves onto other areas of the sky.

“The robotic telescopes and sophisticated software of LCO allow us to get images of a new event within 15 minutes of an alert. This lets us really study these outbursts as they evolve.”

Provided by: Las Cumbres Observatory [Note: Materials may be edited for content and length.]