England Win the European Championship of Racism and Thuggery … Again 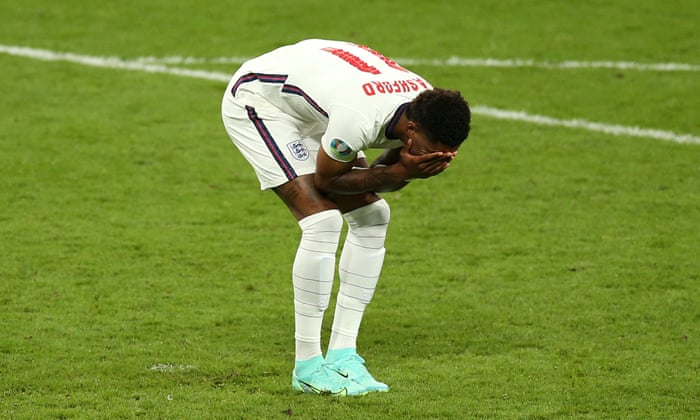 Marcus Rashford missed penalty - in shock for himself, the team and the fans. Subsequently he has endured a tirade of of racism.. (Image: via telegraph.co.uk)

The moment young Marcus Rashford’s shot hit the post, I turned to my partner and predicted that he’d be slaughtered for it online within moments and racism would raise its ugly head.

That angered me, because nobody could understand the pressure of stepping up with the weight of a whole country’s expectations bearing down on your shoulders. Throw in the fact that he’d not long been brought into the game, his age, and the fact that he’s faced online abuse and racism before, even quite recently, for his club.

It’s one of those rare cases in my life where I’ve found myself disappointed to be right. The disparity between the class and pride shown by the manager and team, and the disgraceful behaviour shown by some English fans, is wide enough to park a jumbo jet within.

By this point, I’d already started to see a few videos of fights breaking out, along with people throwing and smashing bottles. They were, thankfully, outweighed by the many joyous clips of people hugging and singing, though. I no longer wanted to win as an England fan, I wanted to win for the sake of the nation’s soul. Let them be happy, then they might be nice.

Isn’t that how people feel about abusers? Statistics from the UK’s National Centre for Domestic Violence (@NCDV_Official) states that cases of domestic violence go up by 26 percent just when England plays, and this figure jumps to 38 percent when England loses.

None of this is down to the England players, but it’s a sad truth nonetheless.

The subsequent missed penalties from Sancho and Saka brought with them another heavy dread that sank to the pit of my stomach. They were both bound to face reprehensible racism, too. The certainty with which I knew this is probably what hurts the most.

Hurt for black people from various countries. Hurt for Irish people, Indian people, in fact, people across the planet. Hurt for disabled people, gay people, and vulnerable children. Hurt for trans people, queer people in general, and for anybody who thinks or lives in a way that may threaten the status quo of “them upstairs.” Hurt for the whole bloody world.

I’m white British, by the way. You can’t really tell by words on a page, but I thought it important to say. An ignorant reader could ease their fragility by assuming the color, gender, or affiliation of any kind to dismiss what’s being said, but now they can’t.

I’m a second-generation Brit of Irish descent. My grandparents stepped off a boat in the sixties, which is basically yesterday in all of human history. Not that long ago, especially knowing that they’d recognize the smell of xenophobia and otherism from a mile away if they were still with us.

An image has gone around online, and I won’t go into it fully in hopes of not spreading the hatred held within. These are cowards who hide behind images online, trying to stir up fear and anger in others in order to get their dirty work done for them. Shameful people who should be separated from the game that they apparently love so much, and not just by being banned, but by bars.

The fight against racism and all bigotry needs real repercussions, like prison time

The fight against racism and all bigotry needs real repercussions, like prison time. Facebook and other companies need to work harder against hate, and thankfully they have started to work a bit harder to shut it down, I think.

People think memes are harmless, but — similar to superpowers and guns — in the wrong hands, they can be extremely dangerous and volatile. MAGA hats were funny until the Insurrection of 2021 occurred, right?

We have a choice as a country. Who do we let represent us? Is it the government, who have shown themselves to be cronyist (or corrupt?) liars who are happy to stab each other in the back while being a shambles? No thank you. Is it those who project hatred, violence, and separation while bringing shame upon themselves and the nation? Again, no thanks.

Perhaps we could find ourselves inspired by the young team of players who gave their all again and again to try and instil some hope in the heart of Britain following what has been an utterly exhausting few years?

As well as the team itself is the Manager and his team of staff, who have all worked together to create a diverse, hard-working, tough England team that truly stood up to represent the nation on the European stage.Yes please. I pick that one. Pulling together to take on the odds as one unit working towards one goal. Together.

I’ll never stop believing that these abhorrent, toxic energies of loathing really are on the way out, and these people are getting louder now because they know soon their way will be irrelevant and of the past.

They’re not all bad, though. Some really have been taken in by fear and act through that filter, as opposed to being hateful. They will one day open their eyes to the truth of things and admit their faults, even making up for them, leaving the true antagonists exposed and alone.

Like a neglected houseplant, they will not be able to survive for long. Not without others to hide behind. Until that time, however, it is up to those of us who disagree to say so, out loud. Speak to those people that you know have a good heart, but have been befuddled into believing hateful things through fear. Ease their minds, and tell them that it’s okay to be wrong about things like this as long as you do something about it.

We’re all a work in progress, but we should judge ourselves by how we respond to evil, and the best way in my opinion is to face it head-on.

Just like the brave, young England players in the Final.