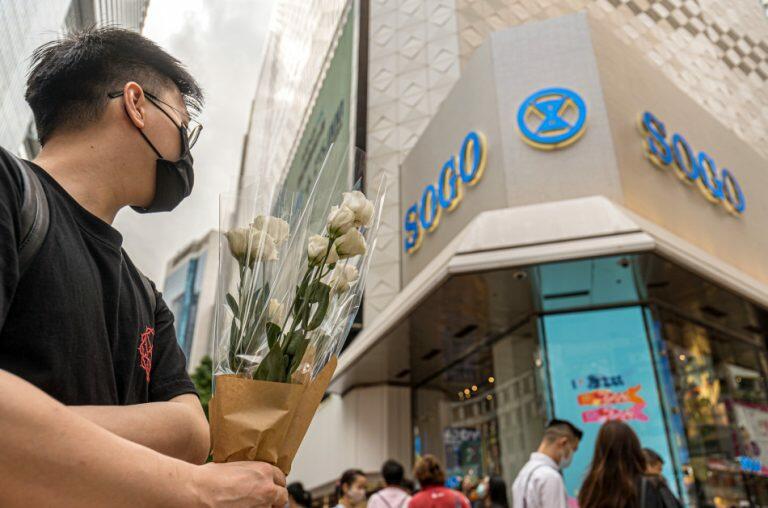 Hong Kongers mourn the death of a man who stabbed a police officer before taking his own life on July 1, the first anniversary of the enactment of the National Security Law. (Image: Studio Incendo via flickr CC BY 2.0 )

On the night of the Communist Party’s centenary celebration on July 1, a 50-year-old Hong Kong man, Leung Kin-fai, stabbed a police officer and then killed himself with a knife. The Hong Kong media exposed the contents of his suicide note, which referred to the Hong Kong police “harboring criminals” and the loss of freedom after the implementation of the Hong Kong National Security Law.

Although government officials made threats and stated that paying tribute to the man who stabbed a police officer or even laying flowers at the site in Causeway Bay might violate the National Security Law, they were unable to silence the public. Hong Kong people mourn for him and netizens continue to express their condolences on various social media platforms and forums.

Secretary for Security Tang Ping-keung met with reporters on July 3 and again criticized people for glorifying and mourning “terrorists.” He said that he was “very chilled” to see parents bringing their children to the mourning ceremony. He also threatened that if anyone advocates violence on the Internet that endangers national security, it would be considered an offense, and that in addition to the existing legislation against terrorist activities, there is also the National Security Law, saying that: “I will do my best to find you and send you to jail.”

After a man stabbed a police officer and then committed suicide, people still come to the crime scene with flowers

However, three days after the stabbing of the policeman, some people continued to come to the scene of the crime with flowers to pay their respects; the police stopped and searched many who arrived. A YouTube video of an elderly woman laying flowers in remembrance has also gone viral, which shows her outside the Sogo Department Store in Causeway Bay holding a white chrysanthemum and carrying a white cloth bag with the words “conscience and humanity” written on it. Her impassioned speech in the video has been praised by many and was viewed by 90,000 people in just a few hours.

In the video, the lady said sadly: “I can’t stand the loss of a life under tyranny!” She said that Hong Kong people have now come to this point because they were forced to do so by the regime, not by their own thoughts. “He came out for Hong Kong, he has died in spirit, why are people forced to this point? Why is he forced to the point where he chooses to die? Who doesn’t value life?” She said she had never seen such cruelty in all her years of life: “This is the devil in power! We are the victims.”

The lady is not afraid of repression, but afraid that many people still believe in the Communist Party.

She said that the moment she saw the news, she felt that Hong Kong people were now in the clutches of the devil. This regime has been interfering for 50 years and has never cherished the lives of the people. “We have no guns and the people are brutalized, being chopped up like meat on a chopping block. We can’t survive like this anymore, they are advancing all the way to persecution, trying to force us to death, disguised as aggression. We were born and raised and educated here, we have the right to live here, why are they forcing people out?”

The elderly lady said she has lived for decades and is not afraid of anything, but she is afraid that many people still believe in the Communist Party and have lost their conscience.

She said bluntly that in China, the persecuted people are the majority, only that they have no way to speak out, stressing that the Communist regime has no power to represent the people: “It is not qualified to speak on the behalf of 1.4 billion people, it is not elected by the people. It is a bandit, a bandit, a devil.”

She only hopes that every Hong Kong person has a conscience: “If people with kindheartedness in Hong Kong wake up soon, there will be no need for so many people to be victimized.”

The lady’s speech was met with a large number of comments from netizens expressing their admiration: “So courageous and bold,” “True Hong Kong people,” and “speaks the mind of Hong Kong people.”