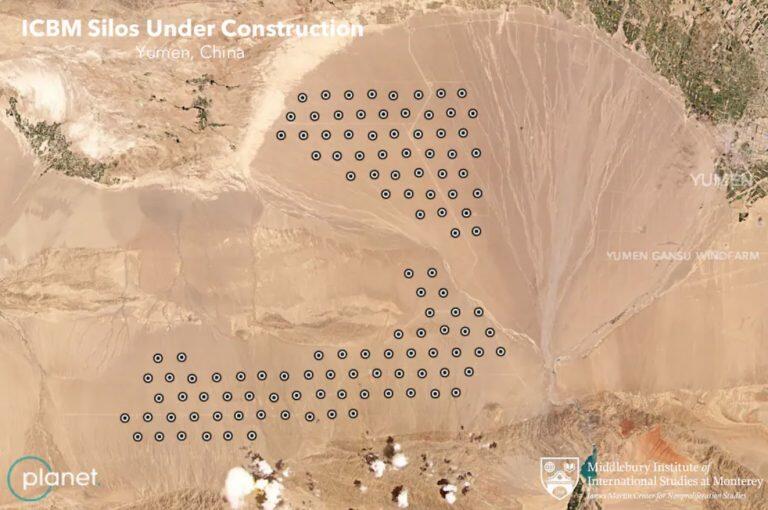 In recent years, China has been making moves that can only be described as aggressive. Its handling of Hong Kong and dealing with territorial issues with neighbors such as India and claims in the South China Sea have drawn criticism on a global scale. China’s nuclear capabilities are of special importance as it is currently flexing its muscles in a way that is considered alarming by experts.

China has begun construction of what independent experts say are more than 100 new silos for intercontinental ballistic missiles in a desert near the northwestern city of Yumen in Gansu province, a building spree that could signal a major expansion of China’s nuclear capabilities.

Commercial satellite images obtained by researchers at the James Martin Center for Nonproliferation Studies in Monterey, California, show work underway at scores of sites across a grid covering hundreds of square miles of arid terrain in Gansu province.

The acquisition of more than 100 new missile silos, if completed, would represent a historic shift in China’s nuclear capabilities, a country that is believed to possess a relatively modest stockpile of 250 to 350 nuclear weapons.

The sites were first identified by Decker Eveleth of the James Martin Center for Nonproliferation. The construction sites spotted on satellite photos taken by Planet Lab are arrayed in two huge swaths, covering parts of a desert basin stretching to the west and southwest of Yumen, a city of 170,000 people along China’s ancient Silk Road. It is believed that major excavation work on the sites began early this year, although preparations were probably underway for months.

The 119 nearly identical construction sites contain features that mirror those seen at existing launch facilities for China’s arsenal of nuclear-tipped ballistic missiles. Each site is separated from its neighbors by about two miles, and many of the sites are concealed by a large, dome-like covering, following a practice observed at known construction sites for missile silos in other parts of China.

At sites where the dome is not in place, construction crews can be seen excavating a characteristic circular-shaped pit on the desert floor. Another construction site appears to be a partially built control center.

In a summary of the center’s findings provided to The Washington Post, Jeffrey Lewis, an expert on China’s nuclear capabilities and a colleague of Eveleth said, “We believe China is expanding its nuclear forces in part to maintain a deterrent that can survive a U.S. first strike in sufficient numbers to defeat U.S. missile defenses.” Lewis went on to say, “If the silos under construction at other sites across China are added to the count, the total comes to about 145 silos under construction.”

Lewis believes the silos are probably intended for a Chinese ICBM known as the DF-41, which can carry multiple warheads and reach targets as far away as 9,300 miles, potentially putting the U.S. mainland within its reach.

Lewis also thinks this can be a decisive strategy to baffle the opponents regarding the actual location of the warheads and missiles. “So while it might seem that 120 silos mean 120 missiles, it could very easily be 12. We just don’t know. And even if China were to deploy only a handful of missiles, its forces could over time grow into the silos. Yet whether the number is 12 or 120, this is an alarming development,” Lewis said.

The discovery follows recent warnings by Pentagon officials about rapid advances in China’s nuclear capability. Admiral Charles Richard, who commands U.S. nuclear forces, said at a congressional hearing in April that a “breathtaking expansion” was underway in China, including an expanding arsenal of ICBMs and new mobile missile launchers that can be easily hidden from satellites. In addition, the Chinese navy has introduced new nuclear-weapons-capable submarines to its growing fleet.