Is There Really a White Pyramid in China? 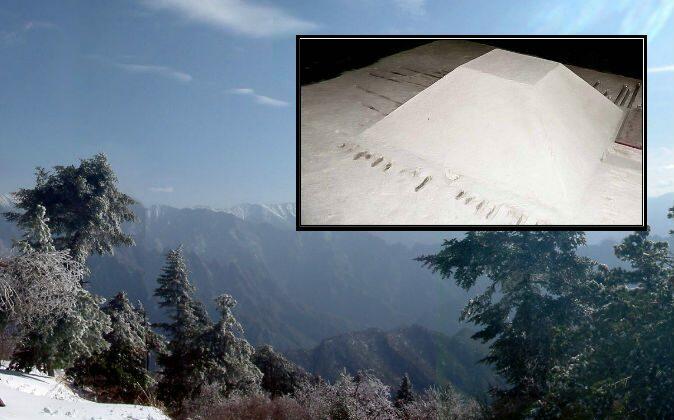 Since the end of the Second World War, there have been reports of the existence of giant pyramids in China. (Image via The Epoch Times)

Since the end of the Second World War, there have been reports of the existence of giant pyramids in China. One of these is the legendary “White Pyramid of Xi’an.” It supposedly is jewel-capped and stands an impressive 1,000-feet high.

Near the ancient capital of Xi’an in Shaanxi Province are dozens of remarkable pyramid-shaped tombs spread across an isolated flat plain. Mixed in with these impressive tombs is the legendary White Pyramid of Xi’an, which, if the stories are true, would outshine even the Great Pyramid of Giza in Egypt. While there are some researchers who believe that aerial sightings of the White Pyramid of Xi’an are in fact the Maoling pyramid, the tomb of Emperor Wu of Han, others are convinced that the legendary pyramid has yet to be found.

First sighting of the White Pyramid was in 1912

American travel agent and trader Fred Meyer Schroder was the first Westerner to record a sighting of the enormous white pyramid. He reported seeing it while walking with a Buddhist monk guide in Shaanxi Province in 1912. He wrote in his diary that he had seen a giant pyramid in the distance, which had smaller pyramids surrounding it:

“It was even more uncanny than if we had found it in the wilderness.

“But those [pyramids] were to some extent exposed to the eyes of the world — but still totally unknown in the Western world.”

Schroder had estimated that the white pyramid was at least 1,000 feet high and had 1,640-foot sides. If these dimensions are correct, it would have a volume 10 times that of the Great Pyramid of Giza, which measures 450 feet in height.

The Buddhist guide informed Schroder that the pyramid was at least 3,000 years old. He also noted that information about the pyramid was recorded in ancient monastic documents and was well-known in local legends.

The second sighting, which is the most famous, was reported by a U.S. Army Air Corps pilot named James Gaussman. He was flying from China to Assam in India in the spring of 1945 when he reported seeing a huge white, jewel-capped pyramid to the southwest of Xi’an. He later wrote:

“I flew around a mountain and then we came to a valley. Directly below us was a gigantic white pyramid. It looked as if it were from a fairy tale. The pyramid was draped in shimmering white.”

“It could have been metal, or some other form of stone. It was white on all sides. What was most curious about it was its capstone: a large piece of precious gem-like material. I was deeply moved by the colossal size of the thing.”

Two years after Gaussman’s sighting, U.S. Air Force Colonel Maurice Sheahan was flying over a valley near the Qin Ling Mountains when he saw a giant pyramid below. His sighting was reported in the March 28 edition of The New York Times under the headline U.S. Flier Reports Huge Chinese Pyramid in Isolated Mountains Southwest of Sian [Xi’an].

Sheehan’s report noted that the pyramid was around 1,000-ft high and 1,500-ft wide, and “dwarfed those of Egypt.” In his report, he said:

“I banked to avoid a mountain and we came out over a level valley. Directly below was a gigantic white pyramid. It looked like something out of a fairy tale. It was encased in shimmering white.”

“This could have been metal, or some sort of stone. It was pure white on all sides. The remarkable thing was the capstone, a huge piece of jewel-like material that could have been crystal.”

“There was no way we could have landed, although we wanted to. We were struck by the immensity of the thing.”

The New York Times published a photo of the supposed pyramid two days later, which was attributed to Gaussman. The photograph was rather disappointing; it was not pure white, there was no jewel-cap, nor did it appear to be 1,000-ft high. This had many people questioning whether the photo was merely a filler added by the newspaper.

While Chinese archaeologists have denied that any such pyramid existed, the photo used by The New York Times was later identified as the well-known Maoling burial mound. This is the tomb of Emperor Wu of Han (156-87 B.C.). It is located in Xingping, Shaanxi Province, which is about 25 miles to the northwest of the provincial capital of Xi’an.

Does the White Pyramid really exist?

Researchers, who have investigated both the legend and the sightings, do not believe that they correspond to Maoling. They believe that the sightings placed the White Pyramid near the Qin Ling Mountains, while Maoling lies in an isolated, flat plain. They also note that Maoling lies to the northwest of Xi’an, while Gaussman and Sheahan placed the pyramid to the southwest.

Sheahan described the White Pyramid as having a “perfect pyramidal form,” yet Maoling is flat-topped, making the descriptions very different.

Some people believe that the White Pyramid could lie within the rugged terrain of the Qin Ling Mountains, making it difficult to find. While many researchers and explorers have pursued the White Pyramid of Xi’an, none have been successful.