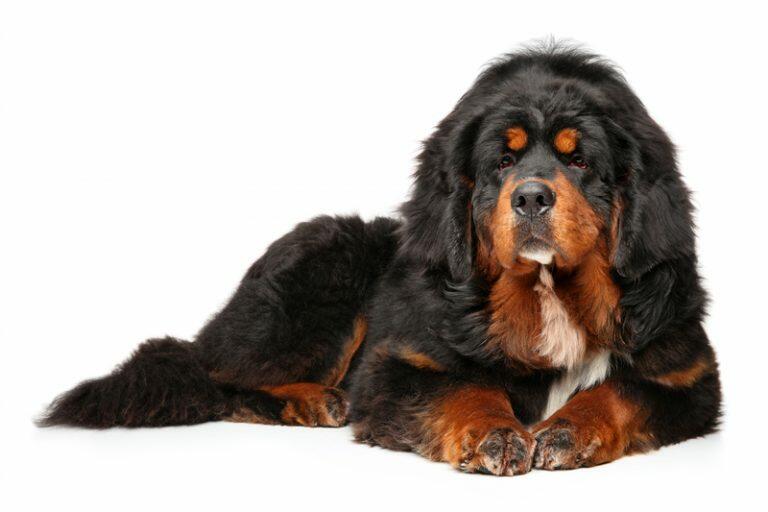 No worries here. The local nomads claimed these dogs could run swiftly like a tiger, stand tall like a donkey, and roar loudly like a lion, while being handsome. These dogs bravely protected their herds and villagers from animals such as leopards and wolves. (Image: Jagodka via Dreamstime)

Tibetans Mastiffs are the most ancient and rare breed of dogs today. Their genetic heritage is linked to the grey wolf more than 58,000 years ago. All other breeds tested were only 42,000 years removed from their wild relatives.

Tibetan Mastiffs have an ancient connection to the people of the Qingzang Plateau (Tibetan Plateau) regions, including Himalayan regions of Tibet, Nepal, China, and India, of high altitudes ranging from 3,281-5,468 yards (3,000-5,000 meters).

Able to withstand extreme cold and guard livestock and groups of people living in such hostile landscapes, these dogs were revered as protective deities.

The local nomads claimed these dogs could run swiftly like a tiger, stand tall like a donkey, and roar loudly like a lion, while also being handsome animals. These dogs bravely protected their herds and villagers from animals such as leopards and wolves.

There’s a saying among Himalayan folk that one Mastiff is equal to nine dogs or three wolves in might and ability.

These large, yet relatively quiet, dogs do not bark unnecessarily, making them perfect companions and guardians of Buddhist monks and nuns posted in remote mountainous locations of Tibet.

It is said that a Mastiff sleeps at the head of the abbot’s bed during the night, raising the alarm if anything “strange” happens.

Owners say that they are friendly giants unless danger threatens; in an instant, they become fierce and bold. They are also noted for not having a bad “doggy smell,” making them acceptable as inside dogs.

Tibetan Mastiff as a historical figure

The earliest record of this dog was a gift dog offered to Emperor Wu in 1121 B.C. The dog’s name was Ngau.

These very large dogs were also noted in Marco Polo’s journals of A.D. 1257, when he traveled through Szechwan, China. He simply called the breed the “dog from Tibet.”

Tibetan Mastiff is the grandfather of modern breeds

DNA sampling confirms that many large breeds of dogs poplar across Europe share a blood lineage with the Tibetan Mastiff. These include old-purpose breeds such as the Old English sheepdog, Rottweiler, and Saint Bernard.

This dog has played an invaluable role for humans over thousands of years, as they have helped to create the many breeds of dogs used and adored today.

How much would you pay for this dog?

In China today, people are known to pay over a million yuan (US$150,000) to own one of these giant pooches.

For example, in 2011, a coal baron was reported to have spent 10 million yuan (US$1.5 million) on a red Tibetan Mastiff. There are many other cases of Chinese paying exorbitant prices for these dogs.

However, it is said that removing the dog from its natural environment has meant the integrity of the dog’s true characteristics is slowly being lost. Avid breeders around the world try their hardest to maintain good bloodlines. Yet being the rarest of dogs, this may be a challenge to maintain.

Among other breeds native to Tibet, one should also mention the Tibetan spaniel, which Tibetans refer to as a “Tibbie.” Compared to the Tibetan Mastiff, the Tibbie only gets 10 inches tall and ranges between 9 and 15 pounds.