Former NBA Player Royce White Speaks Up for the Uyghurs 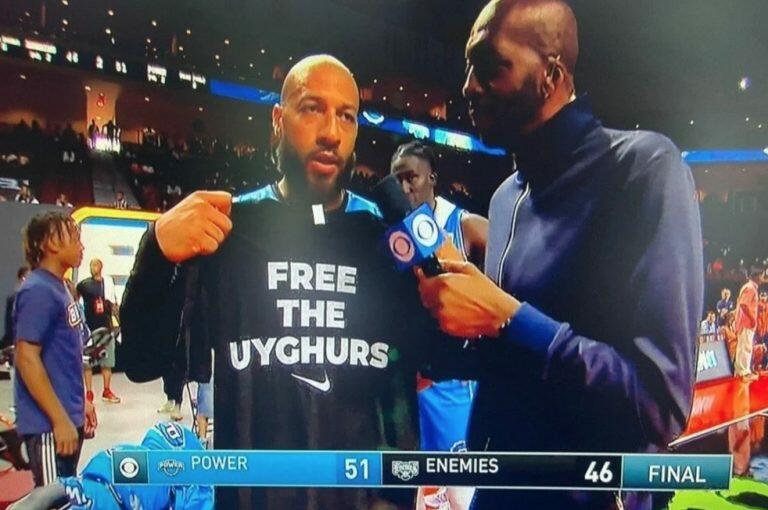 Former NBA player Royce White holds up a T-shirt with the slogan “Free The Uygurs” during a postgame interview at the Big 3 basketball league season opener in Nevada on July 10, 2021. (Image: via Twitter)

China has been accused of committing crimes against humanity and possibly genocide against the Uyghurs and other mostly-Muslim ethnic groups in the north-western region of Xinjiang.

Human rights groups believe China has detained more than one million Uyghurs against their will over the past few years in a large network of what the state calls “re-education camps”, and sentenced hundreds of thousands to prison terms.

There is also evidence that Uyghurs are being used as forced labor and women being forcibly sterilized. Some former camp detainees have also alleged they were tortured and sexually abused.

The U.S. is among several countries to have accused China of committing genocide in Xinjiang. The leading human rights groups Amnesty and Human Rights Watch have published reports accusing China of crimes against humanity.

Royce White stands up for the Uyghurs

Despite the increasing awareness of the Uyghur genocide by the world community, few, if any, professional sports athletes have been vocal on the topic. One exception is Royce White. The former NBA player recently criticized China for its oppressive treatment of the Uygur minority.

The incident took place at the Big 3 basketball league’s opening game at Nevada. White held up a black T-shirt with the words “Free the Uygurs” during an interview after the game.

Apart from explaining his stand on China’s treatment of the Uyghur Muslims, White also posted his viewpoint on the microblogging platform Twitter.

In the post-game interview with a CBS reporter, White was asked about the T-shirt and replied in a candid manner, “Free the Uygurs, two million ethnic minorities in East Turkestan, China, in the concentration camps. Something we got to talk about, you know I’m always going to talk about the real things.”

Incidentally, East Turkestan is what China calls the Xinjiang Autonomous Region. After the interview and his tweet supporting the Uygur community, news with tags such as NBA player Royce White’s ‘Free the Uygurs’ went viral online. White also supports the effort to shift the venue of the upcoming 2022 summer Olympics from Beijing.

White’s video clip was also shared by many Twitter users who hailed his support for the prosecuted minority. Among them was Prof. Khaled Beydoun who is a leading thinker on national security, civil rights, and constitutional law at Wayne State University. He has published a series of books, including the critically acclaimed American Islamophobia: Understanding the Roots and Rise of Fear.

Uygur activist groups such as the World Uygur Congress heaped praise on the former NBA player saying more players should take up the cause as did Sophie Richardson of Human Rights Watch also shared the interview and thanked White.

White’s support for the oppressed Uyghur community comes at a time when the NBA continues to overlook the issue. The NBA has preferred to turn a deaf ear to the plight of the Uyghur minorities and of the Hong Kong people to ensure its profitable endorsement deals and broadcast rights in China are not hampered. Even the majority of NBA players, who are vocal about U.S. human rights and the black lives matter movement, prefer to overlook the atrocities and human rights violations committed by China.