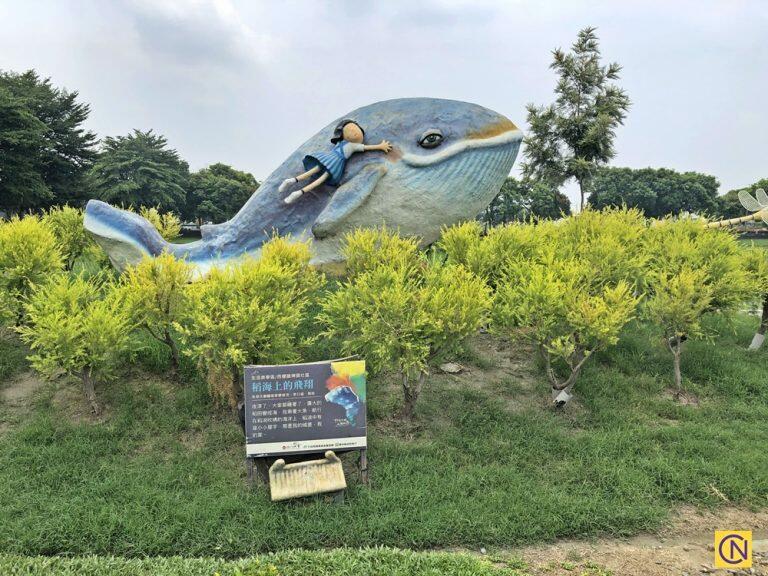 Please watch the following video of “A Spectacular Park That Features a Children’s Picture Book in Taiwan.”

About the picture book

Published in 2015, A Three-section Compound in the Old Days (很久很久以前有一座三合院) is a popular children’s picture book written and illustrated by local artist Maha, also known as Liao Meihua (1965-2019).

The book is centered on the author’s reminiscence of her childhood in the 1960s, during which she lived in a traditional Taiwanese three-section structure in Yunlin County’s Xiluo Township by the Zhuoshui River, which is the longest river in Taiwan and is considered the dividing line between the north and south of Taiwan.

With over 40 exquisite illustrations of the traditional compound she had lived in, the elementary school she once attended, the rice paddies adjacent to her house, the watermelon field on the nearby sandbank of the 186 km-long Zhuoshui River, and other nostalgic scenes in the farming village, the book vividly portrays the author’s carefree childhood in the countryside by the longest river in Taiwan.

About the Pitou Picture Book Park

The Pitou Picture Book Park is the actual representation of the characters and scenes illustrated by Maha in her famed children’s picture book.

The main character, Xiaomei, is in fact the embodiment of the author herself, and the main structure is the imitation of the building illustrated in the picture book. Additionally, there are a variety of realistic art installations depicting the farming village in Xiluo Township in the 1960s, and the fantasy world of Xiaomei.

Among them are “The Watermelon Field in the Zhuoshui River,” “Flying over the Sea of Rice,” “The Grocery Store by the Yellow Hibiscus Tree,” “A Winding Path in the Paddy Field,” and “The Flute Player on the Roof,” etc. The installations create the vivid atmosphere depicted in the picture book that makes visitors feel like they are walking in the past.

Though the Pitou Picture Book Park is not big, it is a fantastic destination for fun with family members or friends. In particular, it allows children to experience the local culture and traditions, and explore the beauty of country life in the early days.

Graduating from the Department of Chinese Literature at Tamkang University, Maha was born in a small farming village in Yunlin County’s Xiluo Township in 1965. Her favorite childhood pastime in Yunlin was squatting on the concrete grain-sunning ground in front of the three-section compound to draw with brick debris at will.

Maha moved to Taichung City in central Taiwan along with her parents when she was eight. She relocated to Yunlin County to set up a cultural and creative gift shop in the village close to the Zhuoshui River in 2013.

As a person of Hakka descent, Maha dedicated herself to promoting the culture of her hometown wholeheartedly. Besides adding local cultural ingredients to her creative products, she also wrote and painted a series of stories based on her affinities for local customs and traditions.

Apart from the famed children’s picture book A Three-section Compound in the Old Days, Maha’s other popular works include a novel entitled Time of Xiluo Old Street (老街時光), and the picture books The Daughter of Xiluo (西螺女兒), Songs of the Wanderers (流浪者之歌), The Journey of a Lonely Mind (小狼的旅程), and The Silhouette of the Pitou Community (埤頭社區風情畫).

Moreover, Maha had visited nearly 200 schools across Taiwan to give lectures on writing and painting starting in 2007, aiming to motivate students to learn the skills of artistic creations on campus. Maha had served as a volunteer at the National Museum of Natural Science for 13 years.

Maha has won various awards and recognitions, including first place in the Category of Reporting Literature of the Yunlin County Culture and Art Award in 2014, first prize in the 2nd Cross-strait Short-story Writing Competition in 2016, and she was invited as one of the artistic creators at the 2016 Xiluo Contemporary Art Season.