Why are People Covering Reindeer Antlers With Reflective Paint? 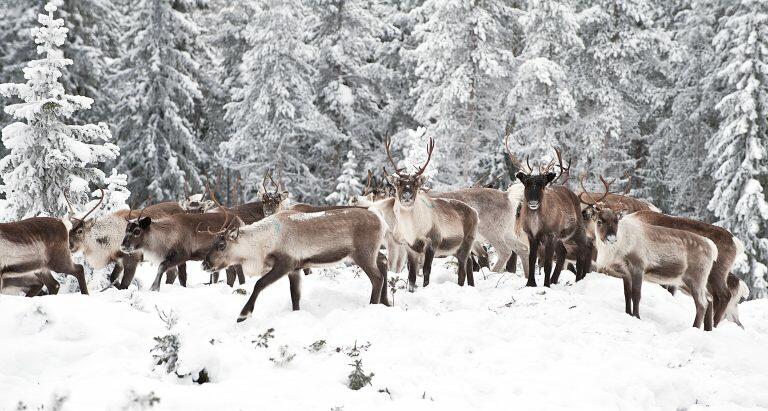 Sometimes, images on social media and online platforms can cause people to make wild speculations that are far from reality. (Image: Moori via Dreaamstime)

Sometimes, images on social media and online platforms can cause people to make wild speculations that are far from reality. This month, an image of reindeer antlers glowing in the dark went viral on the web.

Telephone wires stretch across the tops of buildings in what seems to be an empty street late at night. In the middle of the street, a reindeer’s enormous, orange antlers glow as bright as the neon pharmacy sign to its left.

The claim is that this is a photo that shows a reindeer whose antlers are covered with reflective paint.

A July 9 Facebook post shared more than 50,000 times claimed this photo shows the result of an experiment by the Finnish government. According to the post, Finland painted the reindeer antlers with reflective paint to make them more visible to motorists and avoid collisions.

Many Facebook users were skeptical of the story, but it’s real. The photo, however, is not.

The photo used in the post is an illustration made using 3D software by visual designer Vasjen Katro. The author of the viral Facebook post edited the post on July 15 to credit the artist, but other posts continue to present the photo of the reindeer antlers as reality.

The real effort to save Rudolph and his reindeer friends

Back in 2014, a group in Finland wanted to do their bit to reduce the instances of reindeer getting hit by speeding cars at night. The members tried painting reindeer antlers with reflective paint. At that time, the Reindeer Herders Association also experimented with spraying the paint on the fur of the animals.

Anne Ollila, the Reindeer Herders Association’s chairwoman, said at the time: “The aim is to prevent traffic accidents. The spray is being tested on fur at the moment, but it may be even more effective on the antlers because they are seen from every side.”

The Finnish Game and Fisheries Research Institute reports that some 4,000 reindeer die every year in the country owing to road mishaps, with many incidents occurring at night and during the winter months when roads are ice-laden.

Given these high statistics, the Reindeer Herder’s Association, which operates under Finland’s Ministry of Agriculture and Forestry, experimented with spraying reflective paint on reindeer antlers and fur in 2014. However, the idea did not work out as planned.

The Finnish Reindeer Herders Association said the spray paint on reindeer antlers and fur did not help bring down the number of road accidents. So the group came up with an alternative plan after a few years of trying the glow-in-the-dark antlers program, which also had mixed results.

However, in 2016, the Associated Press reported that the herder’s association pivoted to smart technology and distributed an app that allows drivers to report reindeer sightings on their phones, creating a warning zone of 1.5 miles in radius. For an hour after a reindeer sighting is reported, drivers approaching are warned to slow down.

This seemed to be more effective, as in February 2016, there were 300 fewer reindeer accidents than in February of the previous year.