The Ancient Art of Duzhu Drifting 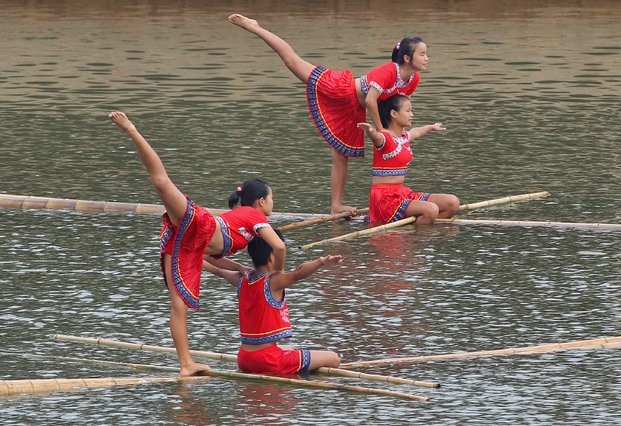 The art of Duzhu drifting is breathtakingly beautiful and original. (Image: via interactchina)

Duzhu drifting as a means of transport

Duzhu drifting, or bamboo drifting, originated during the Qin Dynasty (221-206 B.C.) as a means of transport. The city of Zunyi in Guizhou was renowned for its production of very precious and expensive wood that was in great demand by the emperors in northern China.

The problem was that Guizhou didn’t have large enough boats to carry the long logs, so workers had to stand and guide each downriver in order to transport them to the first destination that had adequate boats to continue the journey.

Standing on a floating bamboo pole on the water itself without losing one’s balance takes considerable concentration as does mastering the various movements. The most similar experience would be that of a North American log drive when men used to jump from log to log to guide them downriver to a sawmill.

However, the girl in the video is so skilled that she practices various dance poses with ease when floating on the bamboo pole. She is 24-year-old Yang Liu and hails from Zunyi, Guizhou. In the video, she is seen floating on a bamboo pole and holding another bamboo pole in her hand.

Yang Liu balances herself on a single bamboo pole to perform her dance moves while slowly floating downriver:

Yang Liu said in an interview: “This is called the dubamboo, also known as the canoe, is a folk skill in northern Guizhou that originated in the Chishui River Basin.”

Yang Liu uses a 9-meter-long dubamboo that is 15 cm wide as a float and a smaller pole for balance, much like a tightrope walker. Of course, many bamboo poles had to be replaced and she practiced on a number of rivers over the years. She eventually came to understand that her Duzhu drifting is not only an art form, but that it also requires considerable strength and athleticism.

A new take on an old skill

Yang Liu got the inspiration from her grandmother to add something more novel and artistic to the ancient skill. The idea of blending the dubamboo with dance moves came to her after she mastered balancing on the narrow bamboo pole. She added Hanfu (historical styles of clothing worn by the Han people in China) and music while drifting.

The mix of intangible cultural heritage and artistic innovation caused renewed interest in this ancient means of transportation. Yang Liu is hopeful that more people get to know about the art of Duzhu and develop a liking for it.

In the beginning, she faced trouble arranging funds, venues, and bamboo poles. However, the hardships have not been able to keep her away from the art form. She says: “No matter how hard it is, I will try my best to develop Duzhu drifting because it is not only my dream but also my grandma’s dream. Now, drifting has become an inseparable part of my life.”