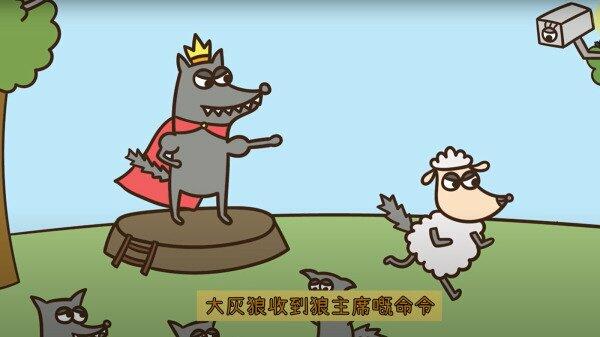 The 'Guardians of the Sheep Village' picture book. The wolves took advantage of the shepherd's leaving, pretending to be sheep, and mixed into the sheep village. (Image: source: Video Screenshot.

The National Security Service of the Hong Kong Police Force arrested five officers of the General Union of Speech Therapists on July 22. Those arrested included the chairman, deputy chairman, secretary, and treasurer on the pretext of breaching the National Security Law. The five are accused of conspiring to print seditious publications — children’s cartoon books.

Approximately 550 related publications and a batch of leaflets were seized in the operation, and the union’s 160,000 Hong Kong dollars (US$20,585) have been frozen. The union has published three children’s picture books since last June.

Li Guihua, Senior Superintendent of the National Security Service, accused the books of vilifying the government and provoking hatred. However, some readers said that the books could not vilify the government because the Hong Kong Communist Party itself is already foul to the core.

According to Stance News, Guardians of the Sheep Village tells about two villages in the past, one of whom lived with “good sheep” and the other with the “evil wolf.” One day, the wolves took advantage of the shepherd’s departure, pretended to be sheep, mixed into the sheep village, and promulgated the “Wolf and Sheep Rules.”

It stipulates that the wolves could hunt the sheep at will, and the sheep rebelled. At the end of the  book, it asks the reader: “If you are a sheep, would you continue to guard your home bravely?” The book also includes a timeline of the Anti-Extradition Law Amendment Bill Movement, (brief name: Anti-ELAB Movement) and indicates the corresponding page number for the story.

According to reports from Hong Kong and Taiwan, Li Guihua said that the book Guardians of the Sheep Village, published in June 2020, is based on the Anti-ELAB, with a timing chart and corresponding stories. The book mentions that the wolves hope to occupy whole villages and eat the sheep. He interpreted that in the story, the wolves refer to mainlanders and sheep refer to locals. The story refers to sheep attacking with horns, describing kind animals needing to defend themselves.

The Twelve Warriors in Sheep Village, published in September 2020, is based on 12 Hong Kong residents detained at the Yantian Police Station in Shenzhen, China. Li pointed out that the book described them participating in the guard war because these sheep were to be killed in the future.

Li criticized it for causing hatred toward the judicial system and the regime. The Sheep Village Scavengers, published in March of this year, describes the situation of the healthcare workers who went on strike in February 2020. Li said that the content of the book provoked animosity and caused chaos in Hong Kong society.

Li Guihua said that the three cartoon books vilified the government, aroused people’s revulsion of the judicial system, and promoted the use of violence and unlawful awareness.

However, some readers indicate that cartoon books do not deface the government because the Hong Kong Communist Party itself is so foul. Even without these books, children will be kept away from the teachings of the Communist Party.

Some Hong Kong people say that in this way, those world-famous books — 1984, Brave New World, Animal Farm, Aesop’s Fables, and so on — will all become banned books. The National Security Department should be renamed the “Non-Security Department” because they make society so unsafe.