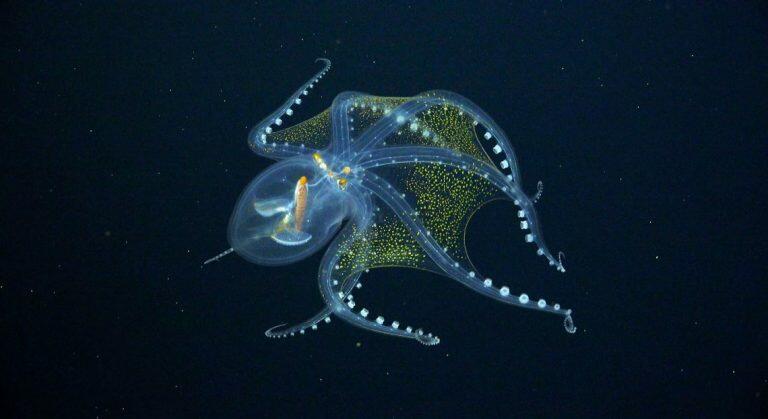 Despite the advances made in the realms of biology, the wonders of marine life remain largely unknown to mankind. In a recent development, spectacular footage of a glass octopus with a near-transparent body has gone viral on the web. The team that captured the image spent 34 days near the remote Phoenix Islands Archipelago in the central Pacific Ocean, north of Samoa.

The researchers mapped 10 new undersea mountains, discovered several new animal species, documented more than 10 symbiotic relationships between corals and other organisms that had never been observed before, and collected samples of deep-sea bacteria that have never before been analyzed.

Dr. Jyotika Virmani, executive director of the Schmidt Ocean Institute, said: “Working with scientists and local researchers, this expedition is a remarkable example of the frontiers of science and exploration that we are able to support. Live-streaming the dives give us a glimpse of rarely seen and fascinating creatures such as the transparent glass octopus. By providing this platform to further the understanding of our ocean, we trigger the imagination while helping to push forward scientific insights and the protection of our underwater world.”

In this video, see a compilation of footage from the research team:

The expedition revealed much that was previously unknown

While the so-called glass octopus may have attracted the attention of the general public, Dr. Rotjan and her peers were more interested in exploring the newly found undersea bacteria species. The bacteria, which was previously unknown, has the potential to deliver drugs to humans without triggering reactions in the human body. The team also witnessed lesser-known corals and sponges.

Dr. Rotjan said: “Deepwater corals [and sponges] live for hundreds or sometimes even thousands of years; there are even some corals living today that predate major moments in human history, like the start of Christianity. [As these] corals get slowly eaten by predators, they have open wounds for long periods of time, likely weeks, months, or even years. Despite this, we don’t see outward signs of infection.”

Dr. Rotjan is of the view that intensive study of corals and sponges may unravel unknown secrets about longevity. It may help the scientists learn more about marine ecology and they will be able to devise ways to preserve it better.

Insight into the rare glass octopus

The glass octopus (Vitreledonella richardi) is a very rarely seen cephalopod found in tropical and subtropical waters around the world. The species gets its name from its nearly transparent body — you can see straight through to the optic nerve, eyes, and digestive tract. These octopuses mostly live in the aphotic zone, meaning deep waters where sunlight doesn’t reach, at around 3,000 feet. They can grow to about 45 cm long and are estimated to live about 2-5 years.

The glass octopus lives in deep, hard-to-reach places, so there is much we don’t know about this translucent and luminescent cephalopod. So far, there have only been a few sightings and a few specimens recovered from the gut contents of their predators.

Using a remotely operated vehicle (ROV) named SuBastian, scientists observed not one but two glass octopuses, adding greatly to our knowledge of the behavior of this elusive species. “Looking into these deep-sea communities has altered the way we think about how organisms live and interact on seamounts and how they maintain the diversity of life in the deep ocean,” said Dr. Tim Shank in a statement regarding the mission.